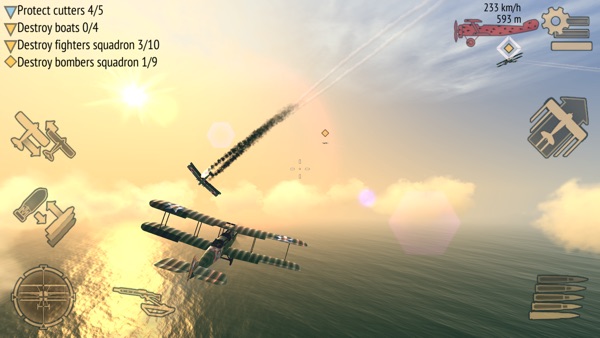 Be a pioneer of aerial warfare in Warplanes: WW1 Sky Aces. Fight above the battlefields of World War I and become the ultimate Sky Ace!
The game will take you into the times when aviation was in its dawning of existence – the first Wright brothers machines went into the sky just 11 years before the Great War! Engineers were quickly adapting this brand new invention into military purposes while creating fascinating and sometimes oddly looking planes.
In Warplanes: WW1 Sky Aces you take control of over 30 historical airplanes – including the Fokker Dr.I, famous for its pilot Manfred von Richthofen a.k.a. “Red Baron”. Others stemming from light fighters like the Airco DH.2 to an enormous 4-engine bomber like the Sikorsky Ilya Muromets – all planes can be customized and upgraded.
Choose between two modes suited for different playstyles and skillsets. In Pilot Mode you can simply focus on air combat, collecting and upgrading planes. Squadron Leader Mode adds an extra layer to the gameplay – apart from combat, you also need to manage resources, hire and train pilots and expand your base.
Two campaigns for Triple Entente and one for Central Powers will let you experience all major fronts of World War I – you’ll fly above most countries that participated in the conflict in various types of mission. Pilot fighters and bombers. Protect or destroy ground targets. Face mighty zeppelins and anti aircraft artillery to change the tides of war.

BECOME A SKY ACE
● Experience WWI aerial warfare with intuitive controls and user-friendly flight mechanics.
● Choose between fun-to-play Pilot Mode or a more advanced Squadron Leader Mode.
● Collect over 30 historical planes from World War I.
● 3 campaigns set in all parts of the world.
● Various types of missions and tasks.

Everything is fine except for the fact there are only 10-12 planes per country soooo…. Fix that maybe?

I literally hate this game!😡👎🏻 It has campaigns in different armies that have the same missions and has infinite missions that can never be completed!!😠 THIS WW1 GAME IS TOTALLY A WASTE OF TIME!!!😡 DO NOT DOWNLOAD THIS APP!!😠

Keeps crashing in the middle of missions

This game is just a mobile version of a very game by home net games (the logo even flashes at the start) I’ve played it in vr and can say that this is 100% the same game(same graphics, same sound same voice lines)

Controls and aircraft performanc doesnt work like it should. You can't climb and if you throttle up you overheat. If you fire more than three bursts guns overheat. Junk.

So I have had this game for years and it keeps me busy when I’m bored, but I would ask of the developers to make it more realistic, like how parts of planes in this game never fall off and how not all barrage balloons caught fire. So, to the developers I will ask you to make a few changes but other wise a great game with great potential.

The joystck operation appears to be opposite of normal flight. When you normally pull back on a joystick the plane should gain altitude. In this game when you pull back (down on the screen) the plane dives.

This game is fantastic except that I can not figure out how to play more than British, German, and Russian nations? I played British pilot mode and British squadron mode until all planes were bought and fully upgraded. I pressed restart game and all progress was deleted. Then I chose Squadron leader/western powers, and the tutorial for the British began again. I never had an opportunity to choose any of the other nations? I searched for help but found only reviews online. Otherwise I would have given this game 5 stars as the world is amazingly beautiful. Please answer this question for me and others who get stuck?

This game would be much better if it had a joystick. This would make the game easier. It would be possible to control your plane. The joystick should maybe have it in the bottom left corner. It would be a circle that is inside another circle. Another one could be to change altitude of the plane.

The game is like the best but the Fokker Dr I is premium and I guess it makes sense because of the Red Barron but I love the Camel but I want the Snipe but I have to use real money.

This game is incredible I play almost every day well not exactly every day but! All I wish is that you had an online mode for this one just like the ww2 version...

The thing about this game it ... dose not have good graphics/ no frist person view/ make online matches / make different and harder missions/ last make it a bit realistic planes damage land at your home airfield/ thanks so much

Sorry but getting shot down with one bullet is not right.

This game is really fun. But you should add fpv.

Great game! But some times it glitches and I can’t tap anything. Also I’ve been putting in carriers and it wouldn’t spawn like they wouldn’t show up. I don’t know if I’m being dumb and I need to fly farther. I’ve tried following the robots and seeing if the will take me there but they just end up going in circles. PLS RESPOND I LOVE YOUR GAME!

The gameplay is fun but it’s usually awkward to navigate the maps and takes a while to get places. Fights sometimes feel dragged out, and the lack of variety in weapons feels dull, whether it’s accurate or not. Fun to play but not perfect.

It’s a great game but needs more planes and why do most planes cost money it’s the same with the world war 2 dogfights why money just keep it at gold and nothing else and why do I only get like 3 gold for missions if I’m the squad leader I don’t want this silver garbage...that’s all