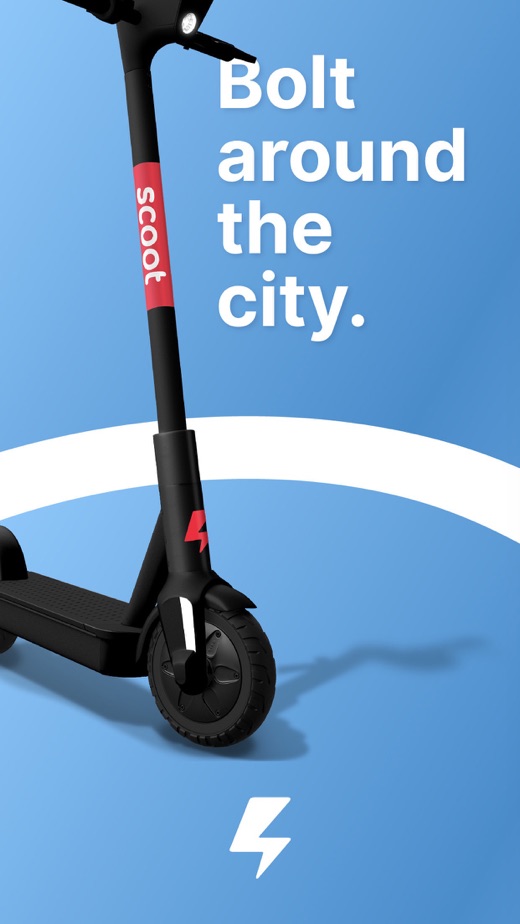 Scoot’s shared electric kick scooters can be picked up and dropped off anywhere in your city. Use Scoot for your daily commute, date night, or a weekend outing with friends.

How it works:
— Download the Scoot app
— Create your account
— Use the app to find a kick scooter and scan the QR code to start your ride
— Ride safely by observing the rules of the road and wearing a helmet
— Secure your vehicle and end your ride

Scoot is the original shared electric vehicle company. Our mission is to reduce global carbon emissions and traffic congestion that consistently plagues cities. In San Francisco alone, our riders have (to date) prevented millions of pounds of carbon dioxide from entering the atmosphere.

Notes:
— You must be at least 18 years old to use the Scoot app
— To operate a vehicle you’ll need to grant the app access to your GPS location while you ride
— Never ride with more than one person on a kick scooter and always wear a helmet

If you would like to see Scoot in your city, let us know using hi@scoot.com

The first time I used one in SF, it wouldn’t start. I was out of the red zone, the scooter was at 80% battery, but every time I pushed down on the trigger I was unable to move

I used for 4 minutes while waiting for the light to turn red and it charged me $4.20 for the ride….

My friend waited 25 minutes for me to unlock a scooter. I had to switch apps because none of the scooters would unlock. Not a problem this company should have

The scooters often cannot be unlocked but will charge you anyway. There is no remediate, they just steal your money.

About 8 scooters were in the same spot locked up, and after the scooter was unlocked it couldn’t be locked up from the same exact location after a friend Unlocked one that had a mechanical issue and could be used. No ride was taken by me, and I had to walk it to a “park zone” (which wasn’t close), but was subsequently charged. Poor first experience, and have asked for my account to be deleted after not being contacted after leaving feedback in the app of my troubles.

The app has little glitches and works great but I constantly get charged a 3 dollar fee to unlock my scooter when it’s supposed to be a dollar. Might have to due with the city I’m in but I’m not sure either way I feel that’s unfair to Pay an additional 3 dollars on top of the fee for distance traveled...

Scoot said they would refund me for a faulty $33 ride. After this, they cut all communications and refuse to respond to any emails. There is a big lack of professionalism - good luck if you ever experience an issue because you will only deal with robots who can’t solve it. Use bird or lime instead

This app doesn’t let you parking in san francisco! You will never be able to park please don’t download. So many issues with locks too.

I couldn’t end my ride even if I already parked the Bird at the required location. End up wasting a lot of time and paying twice as much as my friend who took a scooter from another company.

They already have the worst scooters to begin with and now they have “designated parking zones” so you cannot just stop and get off and park your scooter. It took me an extra 15 minutes to find one and then I had to walk uphill an extra half mile after find one of these ridiculous zones. Might have well just ubered!! Never riding this scooter and again and you should never even start. Lime, bird, and spin any day over these guys!

My girlfriend scanned her scoot and was charging her and the app said we couldn’t cancel the ride because we needed to be in a park zone area but the thing was that we couldn’t even unlock the scoot in the first place so it charged her 5 bucks so what I did to help her was to have me scan it which I did and it canceled hers but then I was in her situation where it was charging me and couldn’t unlock the scoot and when trying to cancel it it wouldn’t because it asked to go to a park zone area but HOW if I can’t even unlock the scoot in the first place.

Ride would not end even at proper parking spot

Too hard to unlock and lock Wasted at least 20 minutes

I live in the San Francisco Bay Area, you know, where things like this are supposed to be quick, efficient, and helpful? The issue I keep running into never goes away; you scan a QR code and the app recognizes that you have purchase the scooter but then the lock it comes with won’t unlock. You can spend forever trying to figure it out and it will never unlock. Then it’s impossible to get the scooter off your app since they have so many requirements and punish you for not doing all of them with more charges AND they still charge you for the “ride.” Best part? The app doesn’t allow you to dispute the charges only takes you to a FAQ page about issues not relevant to this issue. It’ll take maybe 3/4 scooters for one to actually unlock.