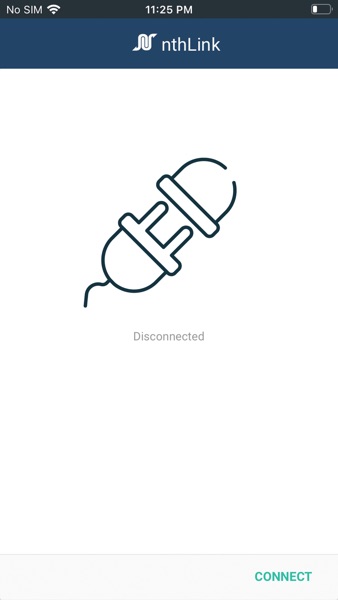 nthLink is a powerful ѴРИcapable of getting through even the toughest network environment. Most importantly, it incorporates strong encryption to protect the users’ information.

nthLink client apps do not store sensitive or personal information on user devices. User information is never transmitted to nthLink servers, and nthLink servers never log traffic patterns that can be used to track personally identifiable information. The client IP addresses are hashed in the server security logs to identify only the country where the traffic is originated. The key is to maintain minimal user and traffic data, necessary to ensure reliable service to the users and provide transparency. If we do not have it, no one can steal it.

Once installed, the nthLink mobile app does not require additional setup or registration. The user can connect his/her entire device to the nthLink ѴРИ network with the tap of a button. With nthLink’s automatic network discovery and recovery, the nthLink app can reliably connect to its network at any time.

hi vpn is different and disconnecting

Can't use it, please repair it as soon as possible

Hi, I am using nthLink in China (PRC), I have an iPhone and another Samsung Android phone. The Android version of the software works but slow, I think the Chinese may have throttle the unknown protocol connection speed. Bathe problem is that iOS nthLink doesn’t work, it won’t connect to any server. Have you included the AES 256 GCM AEDA in the iOS version of nthLink? Please help and thanks!

The connection speed is awful and even it doesn’t load tweeter pictures nor the movies.

Hi After connection it shows Connected, BUT NETWORK shots down and doesn’t work and doesn’t PING

I don’t trust voa. It’s a fake news network why should I trust their vpn app? Do not install

The only fast server is the German one. The rest of the servers are very slow and not operational in bypassing Telegram and Facebook censorship in Iran. There’s no option to select servers. I hope developers fix these issues in next update.

Conecting&opening the sites are very slow, fix it please th u& good luck.

Not good at all!! Very slow for opening sites...