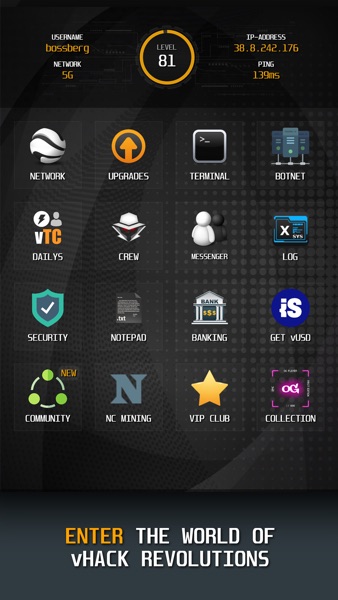 vNFT Explorer! - See, which vNFTs other players got - Full vNFT history of all trades and creation - Check who is owning your desired number of a vNFT - And of course, show what you've got

vHack Revolutions – The Hack Simulator game is here for you to give you some amazing gaming sessions!

If you are a fan of online multiplayer hacking games or cyber attack games, then this is one of those real hacking games that is going to blow your mind with the sophisticated gameplay and fantastic features.

Become a live hacker and enjoy this Idle hacker game and enjoy every moment of it big time! This hack simulator is a MMO or Multiple Massive Online game where people from all over the world can join and have unlimited fun!

Download the vHack Revolutions – The Hack Simulator game and experience the real excellence of the cyber hacker simulator game! If you are looking for a cybersecurity-breaking or Cyber Attack game where you get to play as a live hacker and attack targets all over the world (imaginary, of course), then this web hacker game is for you! Be a lonely hacker or join a team of geniuses to complete challenging and exciting missions and win large prizes as a cyber hacker in this hacking simulator game.

KEY FEATURES:
** Web Hacker Game with Botnet:
Turn your virtual pc to a Hackbot and keep upgrading it to attack stronger targets. When it comes to upgrading your pc – sky is the limit in this multiplayer hack game. Join the hacker wars with the best device possible with the strategy of your choosing: offense, defense, hybrid, and more.

** Dreamhack Project Against CPU or Other Players:
Enjoy story mode in this hacker wars game where you can attack NPCs with your hacking skills. You can also become a part of the Hacker Wars and join the competitive mode and attack other players. There’s a leaderboard to show who is on top! Attack others, steal their assets and buy more upgrades with that! If you are looking for a multiplayer hacking game where you can compete against players from all over the world, this game is for you! This hacking simulator game also has a Network Mode where you can scan and find new target to attack with malwares and hack their information and money!

Join daily missions and win amazing rewards! It gets better every day!

** Cyber Hacker Game with Crews (Team):
Team up with other players and join team battles. There are various tournaments in this Online Live Hacker game including Deface, Spyware, Money Hack Tournament, Cyber Attack, and many more.

** Idle Hacker Game with International Community:
If you are searching for a clicker hacker or multiplayer hack game that allows you to communicate and connect with real people from all over the world, then this game is for you. There is a global chat room where you can chat with people from all across the globe. You can add your friends to a private messenger and talk with them. You can also join the inbuilt forum where you can ask for help or have friendly chat with anyone!

** Win Exciting Rewards:
– Bounty hunting: the whole community is looking for a certain target. the one who finds it first gets a reward!

– Money tournament: the crew who hacks the most money in 30 minutes wins and is getting huge rewards!

** Currencies and VNFT:
Win in-game currencies such as NetCoins, vTC and vUSD through various activities and free currency drops.
*#*#*#
VNFTs are like real NFTs but they are virtual. However, they are extremely valuable inside the game, and you will be regarded as a king in the community if you have a huge amount! You can trade them in the in-game black market!

The vHack Hackers Revolutions – Hack Simulator game is a fantastic source of fun and excitement for all hacking simulator game lovers! Whether it’s a cyber attack game or a hack rpg you are looking for to have unlimited thrill and a fun community, this game is for you.

It was a dark day, I was lurking around looking for a game to play. I stumbled on this app called “vHack Revolutions” I’ll cut it short - I started playing it for a few days, then turned to a few months and want to know something else? Turned in to a year. I haven’t showered in days. I’m drenched in sweat and I wet the bed at times due to the adrenaline of not leaving the game (you won’t know what you’ll miss out on) I enjoy the group chat with other users it makes me feel at home and I’d hate to leave them alone. I spend my last penny on the game to try and be the best, if I could sell my EBT on here I would.. I love the moderators and dev (some mods hate me but it’s life and they still got a special room in my heart) if sexually harassment wasn’t against the ToS I would do a lot of things to them.. I’m currently sitting in a bathtub writing this down and don’t know if I should press the “send” option.. if I do I hope my review doesn’t get removed.. maybe one day I will be #1 when cj , maven, and overclocker retires..

Can’t even get the game to open. Got a new phone and redownloaded and the game won’t open. I try to sign in and it always says couldn’t connect to server.

So I feel like it'd be stupid for me not to update my review after reaching an account age of over 800 days, so here we go. Pros: - Friendly and welcoming community - Hacking has been streamlined to be even more easier - Botnet released, and is very fun - The dev actually listens to the fanbase (I should mention this game is developed by one person, which is Kev.) - Frequent in game events, such as lotteries for vTC (one of the game's four currencies), money transfer tournaments, etc. Very addictive and engaging. Cons: - Netcoin miner can be a grind to start - UI bug if you launch into a Botnet match (doesn't matter whether it's PvP or against CPUs) and click settings, both screens overlap - Some of the game's concepts can be a little hard to get the hang of (at least for starting players) Overall, this game is amazing, and, while it may have its flaws, I still enjoy playing it. Hopefully you will feel the same. Also, Kev, if you happen to read this, just keep doing what you're doing with the game. Take your time with updates, and keep being awesome. :) -SkullBurner

The first few hours were very entertaining until I started unlocking new features. They were also great to explore, but after a while I felt that all I was doing was simply loading up on more cash and not really having things to spend it on other than your upgrades to be able to hack higher level people with better defenses. The community seems cool, except for how it seems like veteran players ignore new players that ask questions to get started. There are a lot of guides in the community tab that kind of help answer some questions but over all it was a bit difficult to get answers and even more difficult for someone to reply to anything in chat. I’m hoping to try it for another day or two as I really enjoy the concept of this.

The game is amazing! Hacking other players is quick and easy. Joining a crew and attacking other crews with the new crew attack update is actually pretty cool, but sometimes people can’t join the defense/attack making a side lose over a bug. Now for the problem. The game is extremely p2w, players can buy vtc, boosters, and netcoin. Every one in a while a event happens called Rush. The goal of it is to upgrade your software as fast as possible. To do this you need boosters, which you can grind for or buy in the shop. The problem with this is that players who buy boosters/vtc will always win these events because it takes a while to get more boosters due to a cool down. The game even promotes p2w with the vip club, a app you get after buying one of the packs in the shop. This gives the player extra of almost everything (spyware, exploits, etc). Sounds good right? Well kinda, it isn’t that p2w because it’s mostly just cosmetic like a chat color and all you can really get from the vip club is more money that you can just make on your own with the spam app. The only bad thing about the vip club is that it says “purchase packs in the shop for $20 to go to the next vip tier”. You have to keep buying things with real money to continue moving up in tiers. Did I mention that you only have a certain amount of time in vip? It’s not permanent. It takes over an hour to grind for at least 1000 nc and that’s with the highest speed level in the netcoin miner app (not including lucky blocks). This is a good game if you have some time to kill or if you’re just watching tv or something. I would give it 5 stars but it’s just too p2w for me. I’ll keep playing it though. I’m level 91 currently and probably won’t stop until 100. Who know maybe you’ll see me in game with the username Bob_Ross. See ya!

The game would be 5 star if I could say one word without being banned from chat for 18 days! I say “cats” once and a moderator is like “bye cat_maca_cute” and I’m like “what?!?” Then after I say that I say something else then the game is like “YOU HAVE BEEN BANNED FROM CHAT: [18:1:23:25]”. So if this keeps up, I AM DELETING THIS APP!!! I’d rather use Hackers Join The Cyberwar, HackEX or LURK. HackEX is better than them all, other than that it’s amazing

The gameplay itself I’ll give 4 stars but when it comes to 3 things the game loses all stars! In chat the developers with accounts can break the chat rules and when you defend yourself they hack your account then ban you on the chat. They allow people to y’all about kidnapping children and pregnant women but when you call someone a scrub or defend yourself they take your money and ban you on the chat. Then after you message the developer the game mysteriously doesn’t load. 0 out of 5 *

Mods will ban you randomly for nothing

Few players in chat. Updates are rare and give no value. It’s fun maybe 10 min... looks like a pay to win cash grab from developer.

Don’t download this unless you want to get banned with in the first day. Toxic community

Chat doesn’t work. I don’t even see how this game is any fun when there’s literally nothing to do. Must be fake reviews