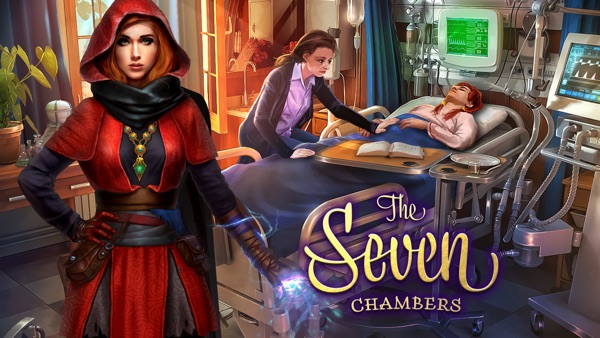 Overcome Beasts of the Underworld, Fallen Angels, Treacherous Planets and Past Lovers. Solve Astrological and Alchemical puzzles. Find secrets from the past to solve the problems of the present. You are Elasaid (pronounced El-ah-sahj) from Scottish Celtic language. Your way into the portal of The Seven Chambers is through a past life as a Highland Warrior. You must do so to escape from a coma and recover your soul from the wretched hands of a past-life lover.

The 30 scenes and 20 mini puzzles of The Seven Chambers take the player through the imagined world of Past Lives, Astrological Influences and Alchemical Experiments. At the beginning of the game Elasaid is in a coma and the purpose of the game is to overcome the forces of Past Lives revealed only in The Seven Chambers. So the player must find the key to unlock the portal into Saturn’s Chamber and overcome obstacles in each Chamber until they reach The Chamber of the Sun.

The key into the Seven Chambers is located in a past life, when Elasaid was the daughter of a Scottish Highland Chieftain, and where her Mother guards an ancient manuscript that guides the way. The Doctor practices ancient Alchemical wisdom and sets up an unorthodox experiment that sends Elasaid’s consciousness back to the Highlands of 1746. You must solve the riddles of the elements in the Scottish Highlands around the time of the Battle of Culloden to gain access into the Seven Chambers.

Then it is race against time to overcome the forces that reside in the Chambers to recover her Soul before death consumes her.

Same as another reviewer from 2 years ago, so I guess developer never bothered to fix it. Game looked promising even if controls were a bit unwieldy, but then it gets stuck as soon as the first puzzle with the big rock is solved. Doesn’t let me go forward or back anymore. Happens every time in the same place. Wish they would just get rid of the game so it stops wasting people’s time. Too bad.

Glitches galore! Can’t click items, have to scroll inventory so it makes combining anything difficult. Waste of money.

The game might have been good but the controls are wonky on an iPhone.

This is a beautiful game, but I did the puzzle at the cave in chapter one and the game locked up. It won’t let me do anything. I’ve even started over and uninstalled/reinstalled the game with no success. Very disappointing!

I enjoy playing this adventure game. The story is fun and a lot of the tasks are challenging (which is what you want). I would have given 5 stars but the maze made me crazy and I am a little bummed the game went so quickly. I am ready for more chapters.

I want my money back. I downloaded this game paid the upgrade price (which I literally never do) because I enjoy puzzle style games like this and the story pulled me in. However, I have had the game glitch twice where a hint is telling me to click on something and it won’t let me click on it, no matter what I do. The first time I uninstalled and reinstalled the game, started completely over from the beginning and was on a roll through the game. But now I’m getting close to the end and it happened again! I don’t want to have to start completely over yet again, that is ridiculous. Such a waste of money.

I’m stuck with too many items in my pack and I can’t combine necessary components because they aren’t directly next to each other, I’m stuck trying to cut the strap on the sword

The gameplay was just getting to a good level of complicated and it won’t let me click the mini game in the fire room. Every time I ask for a hint it tells me the same thing but when I try to click on the game nothing happens.

I really liked what parts of this game I got through but it was so difficult to scroll and select items in inventory I gave up. If this is fixed I will download again.

Have not finished yet, but so far the graphics are beautiful and I enjoy the sound and the voice acting. Love to see new games from developers independent of other groups. Keep up the good work!

I would like a refund, it will not let me pass that level. Nothing I can do to get the game to go any further. Very disappointed

Could be a decent game if maybe the devs tried it out before publishing. Is almost next to impossible to access stuff in your inventory.

The game seems to be interesting from the beginning. However, my problem is when I solve the rock puzzle in the first 5 min of the game, I can’t go any further. It’s stuck. I can touch the screen anywhere and nothing. I had to exit the game and restart it but as soon as I solve the puzzle again, same thing happens. Would love to continue if this issue is fixed. Won’t purchase if I can’t play through.

This game would have been so immersive and fun to play, if only the bar where your inventory was held wasn’t so glitch. It was difficult to scroll, select the items, and almost impossible to click on the item at the top without pulling down your phones menu. So annoying.

I actually appreciate a chance to try a game before purchasing. I loved the story line and characters so decided to purchase and play the full game. I really loved it. It was much the same as other hidden object adventure games but different enough to be amazing. I did run in to a mini game freeze at the beginning where I had to start again then just skip that game before playing to get past it. I suppose if you are some kind of “professional” adventure gamer or game snob you may not like it, but as a casual player who loves a good story and a different approach, I think you’ll really like it. Also, I adored the Scottish accents!

Received a script error 5 mins in

This is just a pregame to a pay to play. If you don’t pay you don’t play. The pregame is just OK, noting great.

I played until it required you to pay to unlock the rest of the game, which was literally about 15 minutes. I get it from a business standpoint (and the gameplay was nice while it lasted) but as a gamer, I’ve played free games that have some necessary in games purchases that were far better. If it weren’t for that I’d give this a better review.

This seems to be a great game & was so excited to play, but I was only into 5 minutes before I got a script error, I was unlocking the rock and as soon I did it gave me a script error of background can’t be found, that frustrating, I even took a screenshot if you need it. Get this fixed and I would even pay to play this game. Thanks and stay safe guys & gals. 😷❤️