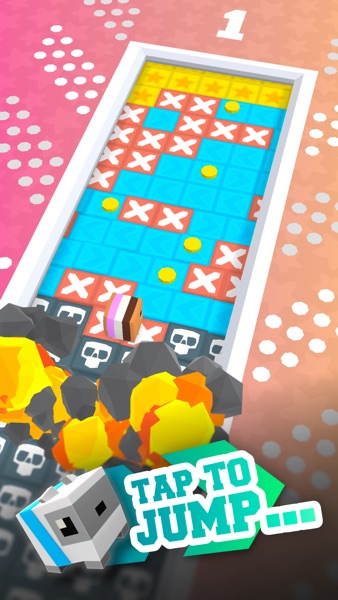 2.1 - Bug fixes and game balancing 2.0 Completely rebuilt from the ground up, The Dreadmill is now more frantic than ever before! - Get crushed, slammed and blown up as you attempt to reach the top with all new, randomly generated floors. - Super Awesome Premium Edition - Exclusive costumes, game modes and gifts, without a single Ad in sight. - Extra gifts and daily rewards to help you unlock your favourite costumes. - Piggy Bank - Save bonus coins as you play, ready to be collected tomorrow. - Native iPad support! - Countless bug fixes, optimisations and improvements.

It will slam you, it will crush you, and it will ALWAYS end you. You will never beat it. It will never stop.

Tap to jump, avoiding everything The Dreadmill can throw at you. Reach the top to reset the floor and push further, collecting as much loot as you can. With randomly generated floors, brutal traps and explosive gameplay, The Dreadmill will always have new ways to destroy you.

Super Awesome Premium Edition
* 15 extra premium costumes, with 5 unlocked straight away!
* Piggy Bank bonus boosted permanently to 50%.
* Super Jump Box – use your jumps to unlock game boosts, such as the Coin Magnet suit, Piggy Boost and Goldrush.
* No Ads – all in-game ads are removed.
* Extra Gift Boxes – A golden gift box appears at the end of each game, as well as an additional Daily Reward box.

It’s way too hard I didn’t even get through the first level! Awful!

I would say that this game is very fun to play and also has a lot of confusing stuff inside of the game like how the floor behind you is way to quick and when I first started I had no idea how to play so I think you could add a tutorial to make the game a little bit easier.

I just started playing this game. It’s fun but confusing. Please add a guide at the beginning. Thank you!

It was very hard and there was no tutorial to learn what to do.

quite hard to play but it will get easy soon