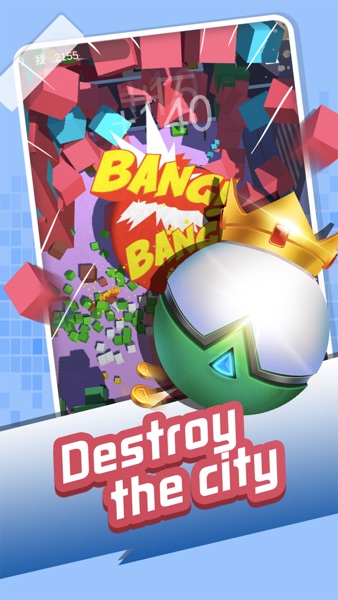 “Hero Ball” is a puzzle game software developed by Chengdu Mengzhichen Technology Co., Ltd. The game is divided into two stages. The first stage is to increase the quality and volume growth through the collision of rolling balls with buildings or other balls. The top 10 players enter the next round of touching ball game and knock other balls out of the arena to become the final winner.

I have bought the ad free just because it does miracles for me. The game is fun and the skins are nice. With so many pop up ads, ad free is the way to go!

So now the balls bounce too much when they land and do not end up where you expect, after playing it for days and days. You get used to the characteristics, then boom totally change. Awful

I love this game.who ever invented this game is a geinus

? this game is sweet

So I basically beat the game I’ve gotten so far that the balls disappeared and I can’t go any further ?????‍♂️ Bottom line I love it ??‍♂️

Its fun but there are a crap ton of ads. So basically I play it on airplane mode so I don’t get ads. Other than that, its pretty fun and addictive.

Love the game but to many ads

This game is SOO addicting.I have been playing for about a week and it is like the only one I play now.This is one of the best games

I love this game, but if you are the type of person who likes to get work done and only likes a little bit of distraction, here’s a suggestion, don’t get this. I’ve been playing for one days now and I’m already at 64m gate. If you don’t like the adds you can always turn on airplane mode, you won’t get any calls or texts or overall internet, but you don’t need it in this game soo, I doesn’t really matter. I’d just like to say this is the most addictive game I’ve come across and I’d like to give thanks to the developers for creating it.

I love this game and I cannot stop playing it!!! The like the update with the challenge levels, but I wish I could choose which version to play, the original or the updated one. Also you have to give up the game to get to earn coins or spin the wheel and it would be nice to have access to that without ended the game.

‘‘This is sooooooooooo much fun I can not stop playing

I have just started this game this week, and as much as i enjoy it, it is ABSOLUTELY INFESTED with advertisements! They pop up as soon as you hit start...they are a full 30 seconds long, and there is no escape from them! Even if you log out. they are waiting to slow you down sion as you log back on! And not only are they way too freaking many of them, but they are constantly re-run, so that you simply cannot breathe without their jingles running through your head! And then, after the animation and jingles ate finally done, they CONTINUE to run the clock down for sometimes Five long seconds, and many times as much as 12 or 15 seconds of totally boring DEAD TIME. Call me fussy, but if i’m going to sit down and spend an hour or so playing a game, i’ not going to waste about HALF of that time chomping at the bit while you lavish yourself with profits that ruin the whole point of gaming! You are not the only one who totally blows an enchanting game with such an obviously greedy grab for more money than the proprietors of a “free game”ought to expect, and i am writing to them next. .

Very good game! I see a lot of people complain about ads. All you have to do is turn your phone on airplane mode. But I love this game, I’ve actually broken the the game because of how far I’ve gone. I’ve gotten to 2,048,000,000 or 2048 million. Once you merge 2048M with another 2048M it just disappears into nothing. I think it would be cool if they took the game further and let you go on forever.