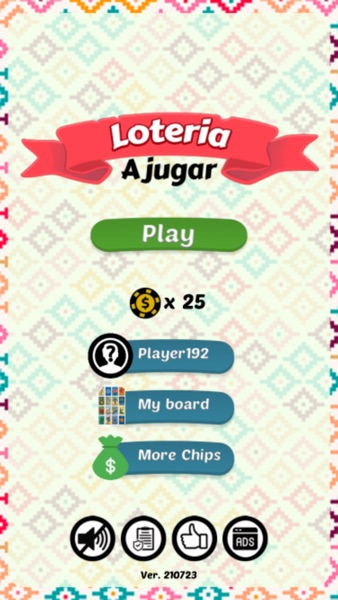 The classic Mexican game “La Loteria” is here, play with thousands of players around the world and have fun playing with friends in private rooms or with strangers in public rooms to kill time.

The challenge is to fill the entire board with the cards that will appear according to the shout.

When all the cards have appeared it’s time to press the good button and shout GOOD!

Have fun and play this wonderful game with your family.

This is a fun way of loteria with friends but it gets annoying when you can’t turn off the menu music while waiting for your friends to join a room, still a great app but would love to see a feature to turn off music/sound .

I just download it a couple of days ago. I was so excited to download this game. But as I started to play on every “sala” I would enter, it would kick me out. Saying that it lost connection when Im connection to my WiFi and it’s on full bars. Also the cards kept overlapping each other and sometimes would freeze. Definitely have to fix the app.

Love that you can create a private room. How can I change it to go line, diagonal, four corners to win instead of full. Maybe you click a button to show you have won instead of the system doing it ! Really fun to do during quarantine since we can’t be with family. Also adding a feature where we can talk to each other. Few suggestions to make this a better time!!! Thanks

When is the update???

I like it very fun I would suggest minor updates would like a option to continue to play in a private matches, a english option even though I know Spanish it would open the app to a wider audience and also allow to choose between full card, 4 center aka posito and straight line bingo but cool design overall great job developers!!! Hope to see improvements in future

I sent the app to my family and friend so we could play each other in quarantine. It would be great if after you created a room, it allowed you to play more than one game (even with ads) before making you exit to create a new room and play again. My senior/tech limited parents have a hard time finding their way back in. The game in Spanish is perfect but maybe allow English or other language options just for instructions.

It won’t let the people I invited log on. Great concept, horrible execution

No puedo invitar a contactos a jugar !!!

It says page don’t work or something like that

It’s pretty that you can play with other people!!!