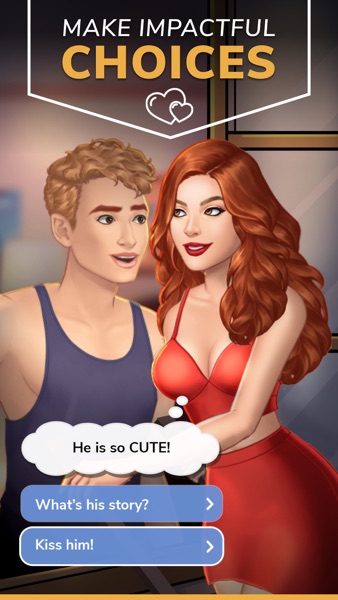 A Love Life lets you LIVE your stories with love, romance, adventure, and drama. Wouldn’t it be amazing if YOU were a character in your favorite story? A Love Life lets you do just that with over 10 gripping interactive stories, where you make choices that matter.

why. literally, I could want to kiss some guy or something and I have to use diamonds 💀💀👹😭😭 I HAVE 0 I HAVEN’T EVEN GOTTEN ANY HOW DO YOU EXPECT ME TO PAY TO WIN??? DON’T GET THIS GAME IF YOU DON’T WANNA BUY DIAMONDS!

Why is there no way to earn diamonds to make choices ?? Why are the diamond choices so high??? We can’t even earn keys unless we paying for those too ?? You have to pay for everything? I say in order for your app to succeed you should meet your players that download this app half way and just give us something. Geez! Pretty soon I’ll be uninstalling…. What a waste of my space on my phone. This app is for rich people who have no problem handing out money to scammer apps like this one. 🙄✌️🙏✌️

The funny thing about the switch to the diamond/pass model is that it actually killed my interest in all things episode. Being able to play the stories on here straight through with no major interruptions or roadblocks actually reminded me why I really started to get into Episode in the first place. Reading through one story on here actually caused me to go back to Episode for the first time in months and actually start playing through a few different stories. Now, I don’t play either. What is the point of this app? If I wanted everything to be blocked behind paywalls and passes, I’d just go back to the regular old Episode app. This app is first and foremost redundant and a disappointment given that I was here before the payment model changed.

Just like you, I probably read almost all of the negative comments about this app. But I just simply ignored all the comments about it being money-hungry because hey, what could go wrong? It was very difficult for me to rate this a one-star app, just because of the amount of work these authors put into the stories and animations. It’s very annoying to play a game where it continuously asks you for money for better relationships with the characters. Please don’t be like me and ignore the app negative reviews and get attached to the storyline, because it’s not worth it.

This app is Episode except it used to be free and you didn’t have to use any diamonds. They updated the app and now have to pay. Just download episode, they only have like 10 stories you can read on here anyway.

i loved playing this because all choices used to be free with no gems… now they added choices that need gems!! if the same stories are on episode what’s the point of this app now. im deleting this app now.

This is a knock off of episode’s

It was so good when it was free because, some people don’t want to pay for tickets that are completely useless, that’s why this game was actually good when it was free, because people could actually experience the premium options, but as always, every company is all about making money to disappoint their customers, I wouldn’t recommend playing this, just get the regular episode game instead of this one, it’s the same exact thing but episode has more stories. Don’t download it, it’s a waste of time!

It was perfect but the new update is terrible! Why would you add diamonds? Now it’s exactly the Episode app and there’s no need for this app at all. Take away the diamonds and it’ll be perfect again!

If you want a legit deal delete this app right now and go install Episode! I would give them two stars if they at least mad up their own stories. This just sad, cruel, and truly a shame. They even used the exact same episode characters! I use episode everyday and literally thus app is the same. Same tickets, as well as diamonds, and same stories! Im only mad because the Episode crew actually put a whole ton of effort into the game! Worst game in the App Store. Wish this was taken down. GO INSTALL EPISODE NOW!!! 💗💗💗

This doesn’t even Deserve 1 star… U made a great game at first then Changed it back to the money hungry ways.. THIS GAME IS NO DIFFERENT THEN EPISODE DO NOT DOWNLOAD IT

they make u pay for premium choices now

WHY?! I loved this game and I understand they people have to make money, HOWEVER why would y’all TRAP me like that!? #SPEAKINGFROMTHEHEARTBFLETCHER

This game is almost the EXACT thing as episode!!! The only thing that is different is that you can’t create your own stories and all the stories available are the exact same as the episode ones……0/5 Stars 😡😡😡