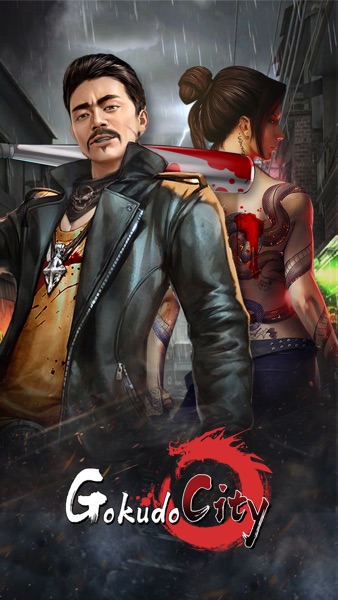 Gokudo City is a simulation and strategy mobile RPG, players will became a leader of Gokudo ( a kind of Japanese mafia ), leading your organization to climb to the top of underworld.

The stage is in modern Japan, you are a gangster being appreciated by your team leader. To achieve you ambition —— become the godfather of underworld, you will lead your members to fight against other gangs.

It’s a wonderful new world just for you.

Promotion: From a gangster to the godfather, take effort to promote your level.
Organization: Operate your gang’s property, accumulate wealth to develop members and equipment
Recruitment: Recruit or persuade different talented people work for you. Upgrade them, as they get stronger, your gang will become greater over than others.
Sociality: Encounter different kinds of confidants, take them home and build your harem of beauties.
Story: Series of events to form a plot that descript the legendary life of a godfather.
Succession: Develop children, expand your relationship with other players by political marriage.

So, release your enthusiasm and energy now! Life needs a bit of gore and guns and madness!

I ‘ve still got some bugs,

Should be band.Look up the commercial for Emperor and beauty racism ad about a black baby.

Fun game to play, enjoy the different characters and all the mini games, but majority of the time they want you to "top up" $150 USD or more just for a new character outfit or even more $ for a new character. This is a lot more expensive than other app games of this type. You could buy a PS4 for the cost of two costumes in this game.

I have no problem with the game but I do want to know if u gonna switch up the sever crossovers. the sever Im currently against has alot of people who just buys there way to the top to VIP 8-9 making cross severs absolutely impossible to win pls change up each severs instead of having the same severs to go against the same opponent and wins every time

This game should be called gays only cause it’s 99% male. NO girls unless we pick it, I did & still got 100% male characters after that even after a name change like iDontLikeBoys.

The idea for the game is nice, as well as the amount of skins for your main character. The English translation is enough to get the gist of the conversation, but it needs more work. The main issue I had was how the sub bosses under you might have an option for a new outfit, but the page says it is in the mall. You go to the mall and there is no such thing to buy. Overall it is an alright game with the usual P2W style of advancement with VIP tiers. But with what is offered at the moment, I feel less likely to spend money on it.

How do you change the avatar frame?

It is not letting me name the babies or children

Bonnie voice sounds like a man and Alexander voice like a woman. The voices just need to be switch but besides a pretty good game.

Resolution no fit with the iPhone 11 Pro Max..... What a trash game

45 server. susan rema What happened? And where should I contact for this problem? Is there nobody?

This game is boring ! And this games is supposed to be about the Yakuza( Japanese Mafia), so why do the characters have Chinese names? Characters with Chinese names but speaking in Japanese. How do I know? I am Japanese that’s how I know! Stupid and boring!

Game won’t load for me I play on a iPad

I love the game, but what happened to Goro Majima? He was replaced with some generic version.

It says it’s in English but it’s not! I really like games like this but I cannot understand a word this game says.

I play E&B too. I would really really enjoy this game if it came in English!