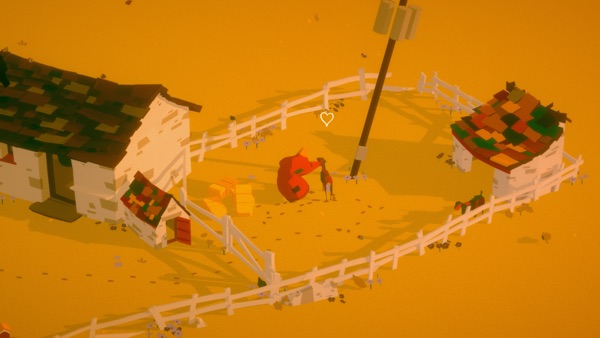 One by one, everyone left the once bustling village for the city. Everyone, except Talma. Now approaching the end of her days, she maintains a simple, solitary way of life, surviving, subsisting, tending to her homestead and her goats.

Develop your own personal routine as you care for your farm and your animals. Tend to your goats, make cheese with their milk, collect eggs and cook meals, grow vegetables and barter with the travelling merchant who brings increasingly disturbing letters from your family in the city.

A follow up to the critically acclaimed Where the Goats Are, The Stillness of the Wind is a quiet rumination on life and loss.

It’s an interesting concept. Maybe with the bugs fixed it would be better.

I bought this game several months back when it was first released. It was buggy and crashed in the opening scene. I haven’t thought much about it again until this weekend. I played through twice and have deleted this app. Super boring and pointless game. It has beautiful graphics and would have a lot of potential if it wasn’t for the extremely disappointing ending every time. The story line itself is boring. Zero action, don’t waste your time.

i got this game because the graphics looked beautiful and i was intrigued by the idea of creating a routine for her virtual farm. the graphics didn’t disappoint but the game itself really did. i understand that it follows a storyline and the farm life isn’t the main focus, but that’s really all that i enjoyed. the letters were pointless and the family members weren’t intriguing. talma would receive an ominous letter yet would continue around daily life- as long as the sunlight would allow. on that, the days are way too short. she moves so slow, it’s hard to finish all the tasks once the days start getting shorter. also, the wolves?? it was so disappointing and frustrating to find my animals dead and not be able to protect them or her. i finished this game in about three hours because i had NOTHING else to do. now i’m playing it through again to see if i can play with a better strategy in mind and maybe get a more gratifying gameplay experience, but i highly doubt it. this game is worth a dollar or two, tops. don’t waste five on it.

It was a beautiful scenic game. But I had no clue what the story line was, what i was surviving for or why it costed so much to just walk around a farm and to be blacked out just because i wasn't inside at night. Way to much money for this.

Controls, pacing and narrative are painfully slow. Add on a number of terrible design decisions and you have a remarkably underwhelming “game”.

Beautiful story, but dear GOD!! Five dollars for the shortest game of my life. If the storyline was more spaced out and the days were longer to focus on growing the farm, this game would be a 5/5, no problem. But before I knew it, it was night time as soon as I got up.. and everything on my farm was dead, even though the game does give you opportunity to guard it, the opportunities fell through. I understand why the days grew shorter, and yes it added to the storyline, but there is absolutely no being at least somewhat successful in this game. There isn’t any “winning”, which I understand (the storyline is the main focal point, and once again, it's beautiful). Unfortunately at the same time, I’m completely upset I spent this much for such a short game. I loved that I was able to support the artists, in a way they did an amazing job of creating the feeling of wanting more. But I feel in the end I spent way too much money for such an abrupt stop. It was an excellent game, I just wish that it was either a lower price for the amount of gameplay, or a greater amount of gameplay for the higher price.

I wanted to love this game - and did, despite the slowness - but I feel like at the pace it is, the merchant could be a LITTLE more affordable. I traded over half my stuff for a dumb billy goat only for it to disappear. I shot the wolf so I know it didn’t die. Then the merchant shows up with a billy goat! Some say he stole it! I feel like the game should have a trade off - either expensive, thieving merchant and FASTER or keep the pace and fix the issues. My hands hurt from tapping and waiting. And you can only water 4 crops then have to walk all the way back!!! At least give the merchant a bigger can to give us... then steal back. Sorry but overall it’s just TOO “zen” for me. Lovely minimalist graphics tho and I wanted to see more letters & dreams but it isn’t worth waiting for another goat or some miracle.

Honestly, I can see how this game would be very sweet and emotional BUT when I downloaded the game (and tried reinstalling the app twice more) the music will NOT play. It completely detracts from the game and leaves you incredibly bored with how slow this game is paced. With the music, possibly better.

Every time I open the app, I get to play for about 2 minutes before it inevitably crashes. It doesn’t seem to matter what I’m doing, and it has crashed even when I wasn’t interacting with anything. Since the game saves every night, I’m not able to progress at all. I’m really disappointed that I wasted my money on what could have been a beautiful and enjoyable experience. I played its predecessor Where the Goats Are, which I thoroughly enjoyed, and I’m sure this game is just as lovely and harrowing, but I’m worried I’ll never be able to play it. I’m hoping for a patch soon, and I did spend actual money, so I’ll keep it for now and be on the watch for future updates.

I love this game, it’s gorgeous, I like the story. I love the concept, however there are so many bugs I have reached an unplayable spot in the game. Even quitting the app and re starting leads to the same bugs. Phantom of loves that pile up and then the game lags to the point of not being able to move Talma. If the developers fix the bugs, I would have given this at least 4 stars. 5 if they made Talma move just a *little* bit faster.

This game is lovely, what with the story and characters. However, it must not be far along in development or something. There are glitches all the way through, and while I paid for this game because I thought it would be peaceful and relaxing, the glitches lead it to be very stressful and frustrating. I am hoping these are fixed in an update very soon. Some glitches include: getting stuck in the “wind”; dropping my basket and not be able to pick it back up (she shakes her head “no”); game not saving after going to sleep, and instead, waking up to some gloomy looking stormy, blotchy, gray scene where I cannot move the character. I am very sad because I truly like this game and am excited for its potential, but having paid for it, I am disappointed that it is not a better quality.

The game is slow but interesting to start. However after about 30min of gameplay I have NOTHING to do. You play a farmer and, 30min in some storm/plague came in and killed all plants and there is no water left. I have left the game on in hopes it will pass but even after a long time it hasnt.

I bought this game and I was excited to play it. It’s pretty unplayable. It freezes and doesn’t save. I wish I didn’t spend money on it. How can I get a refund?

OMG. I just bought this game 4 FIVE DOLLARS. Here are my reasons not 2 but this: 1. SOOOOO FUZZY. The screen is SUPER fuzzy. 2.The character is too slow! It takes me 30 seconds to walk from the goat pen to the house. 3: EVERY 5 MINUTES WHEN I DO SOMETHING LIKE SIT DOWN IT CRASHES AND I NEED TO START OVER THE WHOLE GAME 😡😡😡😡

So many game breaking bugs. I want to give this 5 stars really badly (and probably will in the future) but it’s impossible to do so in good conscience in its current state. Pots/cans getting permanently stuck in walls causing you to reinstall the entire game because you can’t restart it from the menu, losing all future progress towards wheels of cheese because you get tired in the middle of making one, the merchant stealing the billy goat back from you the day after you spend a pretty penny to buy it from him, wolves seemingly unaffected by the shotgun, etc. etc. etc. Obviously it’s about fighting a losing battle of attrition which inevitably always ends the same, but regardless of that, it’s impossible to play this and fully enjoy yourself as it is right now. When these bugs all get patched and worked out I’ll revise this review but as it is you should probably stay away from this game.

About 30 minutes into playing the game and now I see why others said to hold off because of bugs. She dropped the basket close to rocks and will not pick it up anymore. My water bucket has completely vanished. I can’t find it anywhere. So now I can’t really do anything.

This game is really beautifully done, but I found it extremely depressing. Perhaps some find comfort in the solitude and quiet routine of it, but I found it a bit creepy, and the letters from family get disturbing and depressing. I dunnoooo, it’s just a sad experience. The only interaction is with a traveling salesman, and those interactions aren’t very interesting. Would be so cool if it had some more story to it...something....

After running through the game several times I think there should be a way to replace firewood, even if it’s an extra action from the tree stump out back or from purchasing from the vendor. There is no way to replace water either once the well runs dry, which varies as to how long you have access to it. One play I had access to the well 3 times before it was dry. 😕 But I like the idea of the game and will likely play it a few more times since I purchased it.

This game makes no sense, there are no goals. I’ve watched/read multiple tutorials on this game and it just doesn’t make any sense. A waste of 5$

The app won’t load on my iPhone 10, and completely crashes on my iPad Mini after the title screen. Waste of $5. Will contact Apple for a refund.