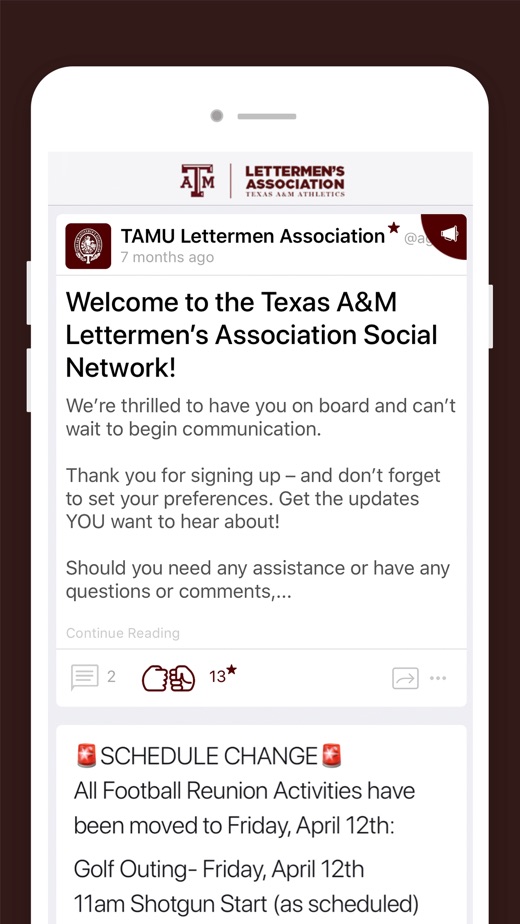 We update the app regularly to deliver a beautiful, smooth, and bug-free experience. This new version includes experiential, performance, and security improvements as well as bug fixes. Enjoy the community!

The Texas A&M Lettermen’s Association was founded in 1974 by 180 men who had a unique vision for the future of athletics at Texas A&M University. As an extension of the old On-Campus T-Association, the Lettermen’s Association was created to provide a means for former students who won Varsity Letters at Texas A&M to gather from time to time and support the University’s athletic programs. Today the Association is one of the most visible and well-respected organizations in the University System, with active members spanning nearly 70 class years and representing all intercollegiate sports.

Since its inception, the Lettermen’s Association has assumed ever increasing levels of responsibility in providing support for athletics at Texas A&M. The Association founded and presents the Texas A&M Athletic Hall of Fame and Hall of Honor at the Annual Burgess Banquet. It also maintains the Archives of A&M Athletic History with team photos and plaques commemorating All-American, Olympic, and League Championships. The Association is also a leader in recognizing the academic and athletic achievements of current athletes.