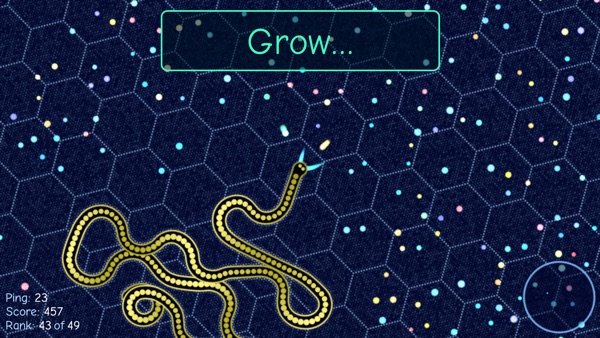 Play against real players around the world in this dynamic multiplayer snake game! You start small, but you still have a chance to defeat the biggest competitors with your skills! Hunt for energy to grow larger, avoid clashes, and make your way to the top of the leaderboard!

NOTE: A good Wi-Fi connection is recommended for smoother experience.

I love the game it’s the best thing ever and I like how you can play it offline. I think it’s even better than slither.io. But one thing that I hope gets added to the game is to be able to have your worm be different colors and to be able to customize it freely instead of having it as one color. I also hope that you could have a trail of whatever color of your choosing to be part of the customization

The game in general is a fun game to use to pass the time and cure boredom. However, the controls aren’t accurate especially when using the dash feature. Sometimes the snake just stops or sends you somewhere the wrong way. Or the dash will just stop working at the worst possible time. But the absolute worst feature are the ads. I don’t know if the game creators get to pick which ads they place but they should at least screen them. This game is rated ages 4 + and the last ad I just seen was some half naked women that said “sex before marriage is wrong…unless you do it doggie style cause everyone knows all dogs go to heaven” and it was for some dating app. ON A KIDS GAME. This is appropriate for 4 year old kids to be subjected to?! I’m disgusted. DO BETTER PEOPLE.

This game is the best. The alternatives are all poor implementations of the idea, and you guys scored the win. Thanks for the great material! If you respond, I’d like to know if you accept donations.

This is a great game! You get so big so easily, and it’s super fun! One thing tho, I’ll just be playing, and then it stops turning. I will try to turn, but it just goes faster. Still love it tho!

Ok so this is pretty cool, but I just wish u could edit the snake/worm idk, and give it a new face or patterns and add different colors were you are able to make colors on its head and able to do more colors instead of just one, but otherwise the game is good

I love this game it’s one of the best (in my opinion) I mean they could add more but it’s great (A. McMahen- 8 years old)

I used to play slither.io wormate.io snake io and more then I found this game called gulper. And it Is the best!

Love how there are buttons that don’t do anything

So the only problem I have with this game is when you and another player are fighting even if they hit your side if it’s in the head it’ll kill you both, it needs to distinguish the winner so you can get bigger and enjoy the game to it’s fullest

Developers: please read. I do not likehow if two snakes run into eachother they both die. It is so annoying!🤬 please make it so that only one of them die, also i like how the snakes look, (the heads are way to big tho) but you should make it so there are skins that ate not just one color, or you should make a create your own skin section because it is kind-ove boring having one skin. Other than that i love you game 💕

I love this game! New update was released and I cant get it to load on my ipad pro 1.

I just wanted you to make it faster

When I first got it to see for myself and not just judge it on reviews it didn’t work. Like at all I got it yesterday and deleted it yesterday because first off the play button was glitches out. Each time I tried pressing play it wouldn’t play at all it would just sit there. Then when I finally got into the game I speed only ONCE and it stopped me from speed anytime after that it sucked. So I could not speed up when I needed to and I would just get killed. Then the play button would do the say thing again then when I got in same thing I sped up once then stopped speeding to slow down then tried to speed up again and it wouldn’t. The controls were fine but the speed up control was horrible!! 🤷 I’m not sure if this is a glitch or just part of the game I’ll probably come back to download it again just to see if it’s fixed. Apart from that it was OKAY and I liked the way the snakes looked it was cool, but I don’t enjoy a game if I can’t even play it correctly because of a bug. 🐜 Oh also the turning is awfully slow and there’s no avoiding chance :(