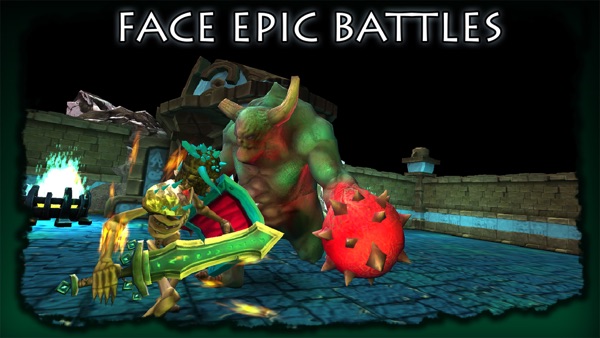 • iCloud Save Synchronization • A lot of BugFixes

A fantasy adventure awaits in the dark world of Morghoth
A story that follows the adventure of a hero who returns from the realm of the dead.
Don’t wait to try this game if you’re a fan of role-playing games!

In the dark lands of Morghoth souls have awakened through the dark magic of a book it’s called the Dark Book, you will be one of the souls who have come back to life and your task will be to understand who has the book and why it used it.
Souls have occupied villages now uninhabited by human beings and you’ll have to investigate and fight against all sorts of creatures during your dark journey.

• A wide variety of enemies, environments, equipment and spells
• A dark story full of twists and turns, exciting and that will offer you many hours of play
• Use touch, keyboard and mouse controls or a joystick to control the character the way you want
• Old-school hack and Slash for lovers of the genre and not
• Easy to play
• Camera and map can be customized to your liking
• Different graphics settings suitable for your device
• Multilingual support: English, French, Italian, German, Spanish, Brazilian, Russian

The Dark Book is an action RPG hack-and-slash inspired by the classic old school like role playing games years 90.
You will play as a warrior skeleton and face hordes of enemies that will earn you experience points, allowing you to level up and upgrade your character.
You will have to perform a variety of missions where you will receive rewards such as items or gems and gold in return.
You will have to visit all the land of Morghoth in order to find information and find the dark book.

Why does the “power attack” icon appear separately from every other control, in the most awkward location possible, and then not work when tapped?!? I’ve unnecessarily died multiple times as a result. Very frustrating. Terrible UI design. I haven’t played far enough in to really judge otherwise, but this one aspect may very well wind up being discouraging enough not to continue much further. Repeatedly running back to the battle area from town after teleporting there to heal isn’t particularly entertaining either.

When I found out I had cancer, I was in a really dark place. I would wake up without purpose and fall asleep without desire. I neared my breaking point more and more every day with the knowledge that one day I would do the u thinkable and leave this plane behind. Not that it mattered much as my girlfriend had recently left me for a more alpha male and my parents left me for a more alpha son. Then one day it happened, while browsing listings for black tar heroine on Craigslist I found something that sated my desires much more fully. The dark book:hack and slash offline rpg, and my life was never the same. Within the twinkling of an eye my cancer vanished and was replaced with hulking muscles and a flamboyant Willy. My hair loss ceased and a a flowing mane of white blonde hair appeared in an instant. Many more changes occurred but I believe them to be too spiritual to share here. Please try this game, nah, lifestyle for yourself to test the validity of my testimonial. Your life will be changed, and a true enlightenment will be achieved. Thanks you the dark book: hack and slash offline rpg, you made me into the deciple I am today, much love

I just finished the game. It can be finished for completely free. However, I do recommend buying some items to help the developer. If you do buy only item, the unlimited repair hammer is the best, since you aways need to repair your free weapons and armor and this still makes the game more challenging.

Got half way through a quest. I think that it’s saved, then I start all over

Very good! Really appreciate the work put in to this. I hope you can work on a sequel or another game along the same lines! Cant wait to see more work from you!

I recently payed for the shield and sword which were a $1.00 each (not to bad)... but after it said the purchase was successful I still couldn’t se them in my inventory nor use them for that matter... please help!

I gave this 5 stars awhile ago but now I am frustrated. I purchased a few things and while it says that they will be restored for free, I haven’t received any of them. I made a new purchase last night and am still waiting. I should have known better. As long as you don’t pay for anything, it’s a fun game.

I had a lot of fun. This is a simple, yet well developed game. Nice job!

All of a sudden it stopped working. There was no update. I’ve shut the app down and restarted to only be the same.

When is the new update coming I hope ASAP thanks

The game is to short. 3 days beat it. And what about the black book ? Never got it. So how can I say I won then ? Is there a part 2. To the game ? Then there is the last thing you buy with your real money. And it’s at the end. $2.12 money a waste. So I can say? It’s fun and not lots of. Money you use of your own like others. That part is great. But missions to easy. Wasted $8.00 for gems to come make from dead. I say $2.00 or $3.00 only need. That equals 75 gem. I bought the 1000 gems thinking it be hard. Now I have 978 gems left for nothing. And the end. You get to keep playing if you want. But why ? You are so strong. You just kill everything with out taking life’s of yours own. Besides that if there’s a part 2 and you can play with what you already have. Then I would give it a 5 star.

Just started playing it on my phone now my iPad not sure yet but seems to be a well made game. I like it so far. It's a good time killer.

By far, the best free game out there! Spent maybe $6 on “ extras” and worth every penny. HOURS of enjoyment. Fun, fun, fun! Thank you!