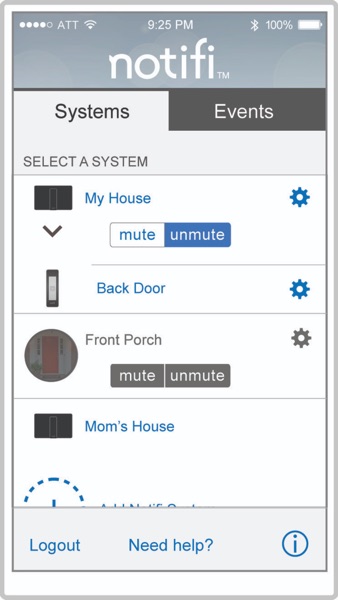 Notifi Connected Products are as easy as 1-2-3-! You can connect any of our notifi doorbells or security using your home’s Wi-Fi network and receive alerts on your Smart Device.

Created login. When I try to log into app to setup it says I don’t have a login. I created several to make sure. Cant setup without login. Catch-22. So frustrating

Then disappears. Junky - says 2017, already something like RadioShack would be better

It’s possible this is the biggest piece of crap I ever bought...can’t log into the account no matter how many times I change the password. The doorbell does ring but I can’t view the video.

Have to agree with the other person it’s useless garbage

The hardware is out dated. The app has no resemblance to any documentation. Don’t even bother with this companies internet of trash products.

Everything works except the most important part - the ability to get live feed and interact with anyone at front door. Image capture appears to work but when going to live feed app locks up and needs to be restarted. Not recommended

I bought a heathzenith360 camera doorbell. How the hell are you going to sell a product that the app no longer exists. Nor the support emai? But the website shows this app as the current support app for their devices. Crappy company

They changed the app. My doorbell worked fine until they changed to the HZ app now it won’t connect or turn on. I called about getting a replacement which she said would be here in a few days. It’s been over a week!

If I could it would be 0 stars Don’t waste your money this product is junk Go with the Ring Doorbell so much better then this crap Plus the have a new App until May 30 . Well well the current App that shuts down May 30 has shut down on May 3rd . Ridiculous

Honestly I couldn’t be more dissatisfied with this product Just waisting more time writing this review is to add to the already countless hours of programming, installing, uninstalling and reinstalling this unit I called tech support more than a dozen times with very little help I try to install this unit at 2 different locations Only to have similar or the same excuses about this doorbell I finally gave up Went and bought a competitors unit ( start with R) And within 10 min I had my video doorbell up and active as I hoped to have originally Maybe I’ll make a video of smashing this notifi doorbell in frustration of the quality of this product and post it Everyone Don’t waist your money

You hook into light WiFi. Then open app to add device and nothing happens. The wheel just spins. Awful technology

Doesn’t seem to even work

This system is trash. Half of the time I cannot get a video when motion is detected and never can I view a live feed outside of my house connected to WiFi.

TLDR: Rarely connects successfully on the app, horrible audio, bad video, hidden fees. Buy the August doorbell or Google Nest instead. First let’s start by saying their box is misleading, making you believe it’s a quick and easy install. Maybe I was just too naive, but it advertises like you can buy the box, go home and slap it on and you’re done. It’s not easy to setup, as I had no pre-existing wired chime system (it doesn’t mention that! Ever!!!!! Until you get inside the box to the instructions, deceptive advertising !!) Okay, if you’re lucky to get it set up properly, this sneaky company requires monthly premiums after your initial trial (again, this is literally mentioned no where, I found out after it stopped working). The video and audio feeds seem to only connect when I’m using a device on the same network. Which is pretty silly, and it also takes ages to connect. Let me include my home internet is a gigabit connection, so it’s not my internet. Even when my device is connected to the same network it can take 2-3 minutes to initialize connection. No guest will sit at the door for 3 minutes, they will leave thinking no one is home. And why should I talk through my door when I’m supposed to have a 2 way audio and video doorbell? I see why this product was 1/3 the price of the second cheapest option, it works only 20-30% of the time. I wouldn’t even say this is a “get what you pay for” situation. All that’ll happen is you’ll throw this doorbell away and go spend money on a simple press button doorbell - as it will work better for audio and visual (which it is literally unable to do, but I personally trust that option more). To the manufacturer: PLEASE RECALL THIS PRODUCT AND DISCONTINUE ITS SALES. Go back to the drawing board! You are legally scamming people; people who could otherwise become loyal customers but will be certain to avoid all your products in the future. I will hopefully be able to return BOTH of the notifi doorbells I purchased, but I’m also happy to burn them on fire. I’ll be upgrading to the August doorbell or Google Nest.

Waste of money. All the negative reviews are on point. Unfortunately, I should have read them FIRST before I wasted my money on buying this garbage.

The door bell is junk. Delayed recording on motion and sometimes it completely dark. The app is garbage. You have to wait forever for the video to be available and why can’t you delete multiple recordings? Junk Update. The app now constantly says video not a a available for days on end. Product support is clueless. Not to mention limited availability. Update 2. Tech support is useless. They told me there is nothing they can do. DO NOT BUY THIS PRODUCT.

Bought this at Lowe’s. Installation was easy enough, but when you attempt to set up the app, there is no help on the weekend so registration could not be completed. Going to take it back and recommend that they remove it from the shelves. Buyer beware!