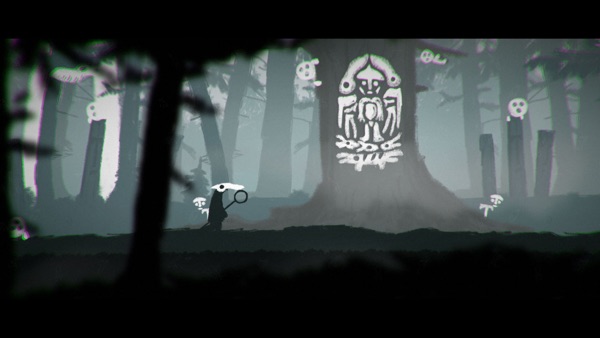 This app has been updated by Apple to display the AppleWatch app icon. * Optimization of the scene with walking ort spirits

Long-long time ago the world was created out of an egg-shell by a god named Yen. In the murky depths of the endless ocean the Lower World was born. The Middle World was made for the men to dwell, and the Upper World was were the ancient gods would reside. Multitudes of spirits dwell among the layers of creation, guarding their secrets in the dark. Embark on a journey through all the worlds of ancient myth, find artefacts of Chud’ tribes and solve all the mysteries of finno-ugric tales.

You are the Mooseman and you have the ability to see all that is hidden to the mortal eye. You are about to visit three layers of this universe – the first one is the Lower World where the spirits of the dead reside.

* Explore the worlds inspired by Perm animal style
* Dive into the deep atmosphere of folk Komi music
* Meet long forgotten gods and spirits
* Learn the ancient myths of finno-ugric tribes
* Don’t expect an easy journey, there are riddles in the dark
* Unlock new abilities and use them to get to the Upper World
* Find all the artefacts that are hidden from the mortal eye

The art is amazing, the puzzles are fun and not too difficult. It is a very short game, but definitely worth the price. Personally, I really appreciate the descriptions behind each animals and the drawings.

This game establish scenery and the grandness of the beautiful Northern tales they are based off of. Please play with headphones since the music/audio sets a super cool atmosphere.

I would view this less as a game, and more as an interactive storybook. It is super fun, and I worked highly suggest it. I have 2 main suggestions to those who play this: 1. Read the myths as you get them. This game is all about the story and mythology. 2. Play the game again as soon as you have finished it the first time. A second playthrough really helps you understand what is happening as you are playing.

It is a very good game and it provides some challenge, and thats great. But the game is WAY to short. I finished the game in half an hour! Other than that i like the game.

I saw and greatly appreciate the TARDIS easter egg in the game, thank you developers and designers

Not very challenging, but absolutely gorgeous!

My two star rating might become five stars if the developer of this interesting game would either fix or explain how to activate the apparently broken english translation of every part of the game... To be clear, some parts were into English while others did not change into english. — Full disclosure: I only played the free intro, noticed that some myths did not translate into english and then I read two app reviews by others complaining about having experienced this issue in the full paid version. So, I decided to trust the reviewers — because I didn’t want to pay for the game and still miss out on the english translation. P.S. ( I’m using a 10.5” iPad Pro, running iOS 12.4.1 )

I wasn’t sure I would be able to do this one. It is surprising..the story is incredible, the music is haunting, beautiful, the vocalists are amazing and that is JUST in the background of the story. It wasn’t as hard as I thought it would be. I admit there were three times I wished there was a skip button BUT I struggled to get there because I REALLY wanted to see how the end wrapped up. It is CLEVER, it is stories of the far past, it is thoughtful, it is haunting. The art, the way it is colored, the theme and the amount of things you will miss in the scenes are worth going back to replay this. It is because there are SO many little tiny details so can see in a second go will make replaying it a joy. So, hats off to each department that worked on this, and the choral group you rounded up. I will have to go back to see if some of this was vocals only OR the group was so amazing it SEEMED like you had musicians too. There was so much to see and listen to that I honestly can’t say at the moment. Thank you for the story, the art, the music and I noticed all through the “gylphs” or ancient symbolic art throughout. Thank you!

This game is so beautiful, the music is great, the puzzles and myths are fun, it was all great! But seriously.... the scenery? AMAZING

I beat this in an afternoon of lounging on my bed- and even though I never went anywhere I felt like I was on a journey. Wonderful music, chilling animation... it brings up something primal from within you, seeing the cave drawings. Excellent use of color and contrast!

I don’t really ever buy full games but this was MORE than worth the 1.99, the music and art style are just breathtaking and I wish I could play it all over again the first time to get the sense of awe and wonder this game gave me.

I thoroughly enjoyed the story and the gameplay. They successfully brought ancient themes to life with graceful perfection. Beautiful, eerie, and fun.

Stunningly beautiful, wonderful story, with just enough challenge! Even though - due to no English translation after the first page about the mythology - I missed out on most of the myths, still worth five stars. Thank you!

Well, don’t bother choosing English as your language. It’s there on the list but trust me, everything will be in Slavic languages. The graphics are nice and there are cows in the river. Underwater cows. That’s something to consider when they ask you to purchase the full game. Overall I feel three stars was a little overly generous.

I loved the games that come out now to teach us gamers that there’s a world out there. Learning about culture is fun and the true reward. It’s nice that games bring out that element with a sense of wonder. This game is none the less beautiful.

such a beutiful game im glad i found it question is there any other abilities to unlock other than the light and seeing beyond?

One of the most original and epic games I’ve ever played. Siiiick