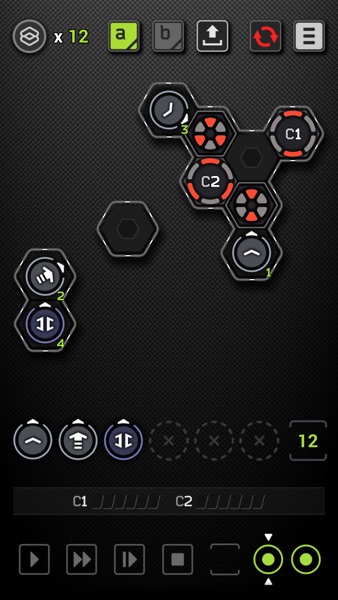 Fixed an issue with offline mode.

This is the next chapter of successful puzzle game [the Sequence].
It features new modules and introduces new game mechanics.
Create moving sequences to bring “Binary Unit” to the destination point.
Many levels could be solved in different ways, which allows to improve one’s results and get into a higher position in leaderboard.
Think out of the box to get to the next level!
Create unique mind-blowing sequences!

Love this puzzler. Only about half-way through the levels and have enjoyed each one. Looking forward to additional challenges. Keep up the great work.

This game is amazingly awesome. Puzzle gamers should do themselves a favor and get this game.

I found this game to so incredibly satisfying. If a level got too challenging, I would work on another... later in the day I would often think of a better approach and come back to it and often that would do the trick. I just wish the developer would come out with new levels.

Played both 1 and 2. Both are great and tough at that. I hope developer is hard at work on sequence 3. It’s worth the money and time. The harder levels are very satisfying and even more when they work different than what YouTube says. Lol keep up the great work!!! #fanforlife

A true logical puzzle game. I noticed two levels got pointed out by other reviews lvl 44 And 50. As I also had trouble with those two I’ll give some advice. For lvl 44 you may be able to gain some insight from lvl38. As for lvl50 I don’t have much room to be cryptic so don’t read if you don’t want help You should try and use your new function to “reset” the position of the old function that spun pieces around it. On a side note I wish the functions had proper names like piston , Fan/conveyor, gear, rotator, etc

SO happy to see a version two out. The functionality is great and the puzzles are lovingly challenging.

Love the game. Is the leaderboard ever coming back? It went blank 3 day ago. My aspirations of being the #1 Sequencer in the world are rapidly diminishing. 😢

Most of the puzzle games on the store are really just time wasters, because the levels aren't actually hard. Some of the puzzles in this take some serious thought. Great work!

Forced and tedious 8 level "follow only my super basic script and then repeat the whole thing again" tutorial at beginning of game almost made me quit, and scripted tutorials keep popping back up. The bits where I'm forced to hit the single step button a bunch of times in a row to satisfy the script are worth a special note. It's a rather smart game to be treating its players like they were so stupid, especially given it's a sequel. Ironically, the much less intrusive diagram you get with the ? button is generally way more informative. Other problem is no scoreboard. A Zachlike without gamification to optimize number of parts, etc, gets old fast. Is my 3-point solution the best? Who knows--so who cares. Edit: and for some reason this particular review and no other gives me a developer response notification every few days. Dev, if you’re doing something that refreshes these responses wish you’d stop. Seems to be only you.

Too easy. I was hoping for something more challenging.

Love this game so far, but take a look at level 33. The solution I’ve seen online no longer works. I’ve tried it on both iPad and iPhone X. Same issue. Stuck until this is fixed. Could last update have corrupted?

Though at least one other person has mentioned this: dragging a tile, new or otherwise, should shift control focus to that tile. It is annoying to have to double select tiles to adjust them when adding or moving tiles.

I’m enjoying both sequence and sequence 2. But sequence 2 doesn’t have the hint function like the first. And I keep earning these points that I have no idea how to use

A great, challenging game, but how am I doing? It would be nice to know the highest score attained for a puzzle, or the minimum time to reach a solution. Yes, it’s rewarding to solve a puzzle, but have I found the ‘best’ solution?

I’m completely blank on this level.

Boring graphics and intolerable play made this a waster of $2 and 15 Minutes.

And was loving this one until the game completely corrupted after level 52. Levels 53-55 do not function and all of the completed levels are corrupted even though my score still shows for all levels. Very disappointed since I can not think of a remedy short of reinstalling the game. A lot of work went in to 52 levels.

Interesting concept, but kept struggling with interface. When you place a new title it doesn’t select. This means you are constantly screwing up other tiles.