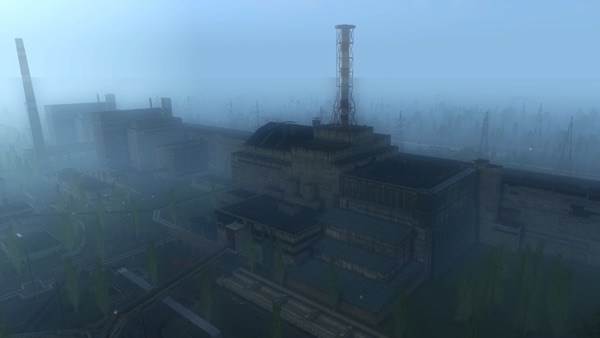 This app has been updated by Apple to display the AppleWatch app icon. Fixed some interactions and made other minor improvements

True horror is back at the Chernobyl Nuclear Power Plant. Will you be able to survive it?

Escape from Chernobyl is not an easy typical mobile game. It is hard and it takes time and tactics to learn and overcome. This game is also best experienced by playing with headphones.

Dive into the darkness and the dangers of the Chernobyl power plant in this continuation of the Radiation City adventure. Unravel the mystery left unsolved: find what happened to Lauren and the story of the nightmare at its source.

Navigate the accurately recreated Chernobyl power plant complex from the destroyed Unit 4 reactor to the outskirts of the complex at their natural scale.

Explore the full area in a seamless experience from open world exploration to the maze-like corridors of each building and the nuclear unit buildings. Scavenge them for weapons and gear to give you the needed edge to overcome this tremendous challenge.

Radiation with anomalies and zombies are just parts of the dangers trying to kill you at every corner.

Fight the deadly zombie infested area and the experimental abominations crawling the complex with improved controls and a wide range of melee and fire weapons. Hone your skills in a new combat system based on natural physics and real motion and plan your fights and try to survive using a new noise based stealth system.

Do you know that guy that which you make disappear by shooting generators? So I am getting brake pads for the train but that “apparition ” guy kills me. Can you give me directions on how to kill him? I love this game. Make more to come! (I’m a kid)

This is NOT a survival game. This is a memorization game. You are forced to memorize a plethora of hallways and doors in order succeed. Pure tripe.

This game is a waste of time and money. You get no way to progress. When I asked the devs to fix the glitch where you get trapped in between walls and objects- they said I’d have to start over. Pure garbage. Do not waste your time.

After finding the Rail Switch Handle and using it, and confirm in my character story that this is done, now the rail switch is back to the old position as it still says missing the part. But the part no longer exists in the game as it was used. It wants me to move the train past the junction but it’s impossible now. This is a horrible bug, all the time sunk in this game for nothing.

I give low ratings to any game that asks me how much I like a game literally when I start it. Not enough time for feedback. So you get bad feedback from me instead of having to constantly be asked how I like the game having not played at all. Sorry, looks good. But I have no idea if it is and will probably forget to come back to give a good review.

good plot but i lost my money

I feel like this game has a lot of potential, but unfortunately the bugs make it essentially unplayable. First, there is a glitch where you will fall literally into random floors, with half of your body in the floor, and the other half out. It’s hard to jump when this happens, so you essentially have to spam jump and wiggle around until it glitches you back out. If you’re in an area with high radiation, or it happens around zombies, you’re just dead. Secondly, I don’t have a crafting button in my inventory section. The screen is cut off in the middle, and the side with the inventory is blank other than the items I have. I can use the items in my inventory, but I can’t craft anything, so essentially if I wanted to keep playing this game, I would just be wandering around aimlessly hoping I find enough medical supplies to constantly heal myself, because I can’t really do anything else to progress.

Terrible control with or without a physical controller. Worst flash light that ever existed this is how they make the game challenging not with great gameplay

This game is so boring. I wish I can get my money back. Don’t buy this game. On of the worst games ever....

After playing RI (which was actually a decent game) and then RC (which was a frustrating disappointment), I downloaded EfC hoping against hope that the devs had taken a step back in the direction of making a playable game. They had not. This game is ridiculous. The speed you walk is like an old man that can only shuffle his feet, and sprinting is only a tiny fraction less slow, like you gave that old man a cane. The opening stage is so unnecessarily difficult that I quit in the first ten minutes. Your radiation reaches max lethality in mere seconds, and you barely get any radiation pills and medkits to survive long enough to get out of the reactor where you begin. Add to that the distorted vision you get while irradiated and you can't find your way out at all. I love how the description says "this is not a typical easy mobile game." Very ambitious of you all to try and transcend the platform you're making content for. I have a question for you: who is your target audience for this game? "Typical" mobile gamers will not play because it's too brutal, and "hardcore" gamers who want a challenge will be turned off by how abysmal the controls and combat mechanics are. And you dare to justify this terrible design by saying, "it takes time and tactics to learn." I laugh and cringe simultaneously at that statement. If PlayStation 1 had had an app store, this would have been one of the trash 99¢ titles. Your ambition precedes you, devs. People will hate you for enticing them with an actual survival game and then taking their money and leaving them with this garbage. To anyone reading this, do not waste your money on this. Half of me wants to say go play one of the previous titles in the series and accept that it won't get any better than that, and the other half of me wants to say don't even give these devs any more of your attention. Shame on you all.

I’m a huge fan of Radiation Island and thought that Radiation City was OK but this iteration is very clunky and the controls are not precise. The environments are not as well thought out and it doesn’t have the sprawling world of the others.

Really liked Radiation Island. Radiation City was still good, although not as good as Island. This one is unplayable. No story. The physics are as bad or worse than the first two. Game goes from reasonable to impossible.

First 2 iterations of the game were excellent; this version not so. Seemed the developer rushed to get the game out and it ended up being a series of similar tasks. Also the open environment and largesse were lost. Somewhat disappointing.

I would really appreciate it if you had a variety of slow and fast zombies instead of having just zombies who just immediately run for you as soon as you make noise!!!! Radiation island had a mix of both which was why it was a good game in that aspect. Please try to add in some slow zombies since by nature zombies move slowly. I understand the infection can mutate making them fast but not all zombies mutate fast so this game would be more fun if it had slow and fast zombies. Please in addition add slow zombies in Radiation City!!! You can’t imagine how excited I would be to play both games then!!!! I will even give your series a five star!!!! If you can’t do the changes this game would you please be able to do it the next. Thanks.

Luv these guys software. Hard to believe skip intro/tutorial hasn’t been implemented from the start. Surprise me and you get the last star. PS-Consider this fix for RI too. I have all three :) PSS-New game needs the little red upgrade indicator like RC, but without a pop up.

Everything about this game feels unpolished. We live in a time where great games like Ark and PUBG have fantastic and polished mobile ports. The frame rate fluctuates on my iPhone X, the enemy’s move unnaturally and have terrible AI and the tutorial notifications pop up relentlessly.