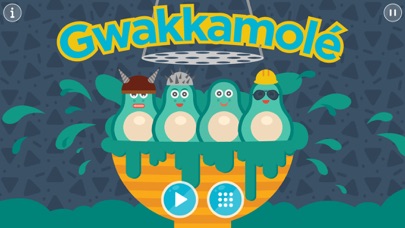 Fixed issues with pause menu and when saving progress after going back to the main menu.

Gwakkamole is a game designed to train inhibitory control, a subskill of executive functions. Inhibitory control involves being able to control one’s attention, behavior, thoughts, and/or emotions to override a strong internal predisposition or external lure, and instead do what’s more appropriate or needed (Diamond, 2013).

Players need to smash avocados that have no hat or that tip their hat but avoid smashing avocados with spiky hats or with electric hats.

How does this support learning?
Executive functions refer to a set of top-down, goal-oriented cognitive processes that enable people to control, monitor and plan behaviors and emotions. Miyake and Friedman’s model supports a unity-and-diversity view of EF in that it incorporates the three distinct but related components of EF: inhibitory control, task-switching and updating (Miyake et al., 2000).

Research has found that EF is related to performance in literacy and math along with long-term gains in school performance and academic readiness (Blair & Razza, 2007; Brock, Rimm-Kaufman, Nathanson, & Grimm, 2009; St Clair-Thompson & Gathercole, 2006; Welsh, Nix, Blair, Bierman, & Nelson, 2010) and that disparities in EF among preschool children from low-income versus high-income homes may contribute to the achievement gap (Blair & Razza, 2007; Noble, McCandliss, & Farah, 2007).

This game is part of the Smart Suite, created by New York University’s CREATE lab in collaboration with the University of California, Santa Barbara, and The Graduate Center, CUNY.

Like the game, but the levels won’t unlock or move to the next “world” like it looks like it’s supposed to in the App Store. I thought maybe I had to finish them all in one go, so I did but still nothing happens. Can only start on level one no matter what. *just deleted and re-downloaded, seems to be working correctly now

Only on level two but it’s gonna be tricky if the speed picks up. Fun game.

As long as you can get through the beginning levels without deleting the app you will find it fun and challenging. There is a bug on level 19 that doesn't fill in the yellow stars after completed with a perfect score.