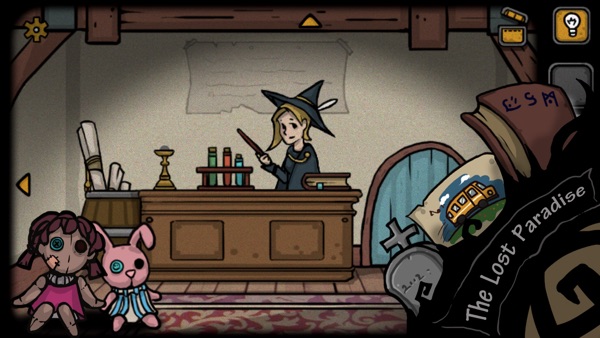 This app has been updated by Apple to display the AppleWatch app icon. iphone X adapter

Get Lost in the forest, but the night is coming. You’re a girl who is looking for her home and parents. What are the creatures you met? Friend? Vicious monster? Or something that no one knows?
Puzzles come to you one after another, and the choices you have to make. What leads you to the last, is always yourself.
Go and solve the puzzles, to reveal the truth of the forest and make clear what has happened. To get away from the Lost Paradise!
Features:
Dark and horrible 2D hand drawing makes you feel immersive.
The new and challengeable puzzles! Challenge yourself!
A story with more than one end! Explore to finish the multiple ends to unlock the achievements!
The sequel of the Lost Paradise! Relatively independent story will attract you whether you’ve ever played preceding production!
————————————
https://www.facebook.com/hundonggame

To hard to much

Nothing to hate , just could have some improvements

After finding the crosses and being hungry the game took me back to the beginning. Too frustrating to find clues. Better games out there.

The game is great, all though sometimes I do get lost and have to buy hints or watch a walkthrough.

The first one was so well made, this one just fell short. The puzzles made no sense (I used the directions from the compass and map, but apparently that’s wrong and I had to look up the answer.) It was also fast, and the story relied on dialogue, so I couldn’t understand the translation. :/ dunno what happened here.

Gonna have to pay to get hints to painful puzzles Forget this one. Better ones out there

At times I feel kind of lost and I’m not sure how to continue, I also don’t think the hint option is very effective since there’s a chance of getting a hint about something you already figured out

I play a lot of escape games, yet the translation is so terrible you can’t tell what you’re supposed to do and so are the graphics. Found myself just playing along to the walkthrough. Deleting.

Most horrible game I have ever played but was fun

There’s no doubt, you have to use hints and walkthroughs. I got stuck way too many times. Things just didn’t flow or make sense and the storyline didn’t make sense either. Maybe if the translation was better

Lost Paradise 1 was an interesting and haunting story. You could remove ads with a small fee. Not this one. Story is more cliche and the puzzles are just the same old “doing favors” for characters. Plus the ads are AWFUL and intrusive. Right in the middle of solving a puzzle, they pop up and I have to start over.

Got tired of the ads that pop up while you are playing game.

So, if you're outside of a wifi signal, the game won't load. This is the developer's way of forcing ads. I wasn't going to play the game just because of that...but wanted to check it out before leaving this review. But 5 minutes into the game ..it crashed. The game wasn't very good anyways..so it's deleted.