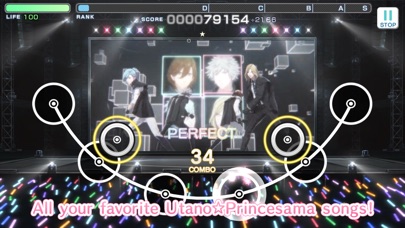 Enjoy your favorite Utano Princesama music in this intuitive rhythm game, which is also a massive hit music game app in Japan! Simple and fun to play. Just tap along to the rhythm!

Meet the members of leading entertainment company Shining Production’s hottest new group STARISH and the veteran members of QUARTET NIGHT. Communicate with all eleven stars, follow their behind-the-scenes lives in Story mode, and then take to the stage and help them deliver the show of a lifetime! Support your favorite boys as they aim for the top!

– Play your favorite Utano Princesama songs anytime you like!
– Create your ideal unit and increase the Bond between the unit members!
– Meet all 11 stars anytime you like! Depending on the time you visit, he will say different things.
– Collect Photos and then unlock new voice clips, original side stories, special outfits, and more!
– Arrange your units any way you like. You don’t have to stick to the groupings in the story! Enjoy features that let you level them up and make them better idols!
– All stories are fully-voiced, included side stories!
– Increase your Bond with the guys to unlock new voice clips.
– Unlock Special Shots and high-quality Posters of your favorite stars!

Raise his Bond with you and maybe something special will happen on your home screen!

Spend everyday in your new life surrounded by 11 hot idols!

Hello, I’ve been playing shining live for a long time now and I have had some issues before but they were immediately fixed but I’m here now because I’ve had this issue for a whole week and it doesn’t seem like it’s going to get fixed anytime soon. My issue is that every time I’m going to watch the 3 ads they provide to us daily to get the 60 LP and the 5 prisms. The game sends a message that says and I quote “either the video failed to load properly, or there are currently no available videos”. This issue has been going on for a week; I thought it was because of my phone storage or something but I have plenty of space for the game to keep growing and I also checked with some friends and they are having the same issue as well. All of us get kicked out of the app if we press the ads and start navigating the app for a while and it happens constantly. I love the game and I won’t stop playing but i depend on this 3 daily rewards a lot and unfortunately I’m not getting them. So I hope this issue can be accounted for and be resolved soon. Thank You for your time and Have a wonderful day.

As a fan of rhythm games, and most japanese idol series, this is the first good ones with male idols, and the only one in English so far (that until Ensemble Stars releases their version). Idolish 7 and Idolmaster SideM are others, but in Japanese. Now, I recently a bit more of why japanese idols are popular. It’s an interesting concept, and best to remember this often: - Idols are meant to sing various of different songs and genres. - They are about watching the idols’ growth, being goofy and having fun; Uta no Prince fits the narrative. The characters, songs, and the cheesy story goes along well. For more fun, check (it out) the anime! The gameplay is smooth, and good notes and settings customizable. Characters are Live 2-D, which is pretty good. For me, it doesn’t matter, but plenty of people like that. Card illustration is good, and URs are top notch. If you don’t get event ones, don’t worry! You can still earn them during other events, but in a matter of a month — something worth to notice. The only issue I have would be the size of the game. There are other anime rhythm games where you can delete the cache, and let the player choose the songs to download when you want to play it - similar format to Idolmaster and Ensemble Stars. This would be help gratefully to save space, and not make game data huge. Other that that, it’s a fun, yet simple game to play and get into.

This game is SO fun and I love the character so I had to have the game. Events are competitive and fun and collecting cards is so fun. BUT I CANT HAVE ANYTHING ELSE ON MY PHONE JUST FOR THIS GAME AND IDK WHY IT REQUIRES SO MUCH SPACE

The music is fun and the gameplay is decent. gets a little glitchy on hard or harder levels which causes it to become nearly impossible to get a good combo score but the game play is fun enough. The story is a massive snore fest but the conversations for the cards are fine. I mostly love the event story’s more than anything else but it requires a lot of grinding

Good game to play when you just want to relax but also if you want to challenge yourself, I love the music and the characters :)

I love this game and have been playing for 3 years, but it takes up the majority of space on my phone and I wish there was a way to delete the data from stories you’ve read/watched. I’m only ever going to watch them one time, so I wish it didn’t have to be downloaded and stored on my phone forever…. Clearing the cache does nothing (because it redownloads everything right after), plus it makes me worried I’ll lose something.

I like it. Amazing. Thank you. Men are very hot

The game is great, but there’s a big issue. Whenever I leave the app while it’s still running, it glitches out. Sound won’t play and sometimes I can’t even play a level. I don’t know what’s wrong with it?

I really enjoy the characters, but I was more hooked on the rhythm part. My only real complaint is how it takes a minute to get another song ( as in leveling up, and then finishing a chapter) and the lack of a “retry” button. I find it really annoying that a “rhythm game” has a limit to how much you can play it. Other than that it’s quite nice.

Okay I gotta say this is an amazing a** game! But is it just me but the Live Stage things (I forgot what they were called lol) are kinda hard for me to play. Like I see the ads and they make it seem easy! But when I actually play it it’s a lot harder than I thought. And I sorta wish the stories were a bit longer! Because i don’t think it’s very worth using one of the _____ to read a very short story. (Fill in the blank cause I literally forgot what everything was called ;-;) it’s a lot of names to remember too. Like 11 names? Not complaining about the characters though. They. Are. Hot. 😗🔫 Welp thanks for this game! Have a nice day or night!

This game is great for people who love vocalist like hatsune miku. This game is so good and that is why I wanted to write a review:)

I want to start this out first by saying, I hate Idol Games. I hate them with all due respect, yet thanks to the luck of the draw I absolutely fell in love with this game and most of its characters (my favorite is Natsuki). While it's songs do have that old vocaloid vibe, its intriguing gameplay and the singers are amazing I simply can just look past that vibe and to be honest, I grew up with old school vocaloid either way. I also absolutely enjoy the story so far(currently on chapter 9), there hasn't been a moment where I haven't laughed whenever Natsuki was around. His cooking skills really are something to be wondered. Regardless, my only two complaints (and its probably a bug) is where at times the notes in the beatmaps would randomly flicker and at times won't even register my inputs. I really do hope these get fixed as the did strip me of my Ultimate Combos that I'm still really bitter about. Nonetheless I would recommend this game to my friends, it certainly helped me get into the franchise.

as someone who has played this game since about a month after the initial release, i have grown very attached to the characters and don't have any i ACTUALLY dislike. granted i have my favorites of course, but i think the characters are all fleshed out enough so you cant particularly hate a certain boy or continue playing through the game without growing at least SOME fondness to them all. and although the gameplay, the actual rhythm aspect (which by the way, having an XR my biggest annoyance is me accidentally swiping to my home screen or recent apps by accident but that hasn't happened with this game!!) the story, events, the gacha, and the opportunities to earn prisms, all work amazingly well, i can't seem to get over the sheer SIZE of this game that just continues to expand. If you started playing this game at release, the size was 2-4GB depending on your amount of cards and if you chose to install the entire game rather than downloading in parts. now, as i chose to download the entire game, it is roughly 7.4GB. it's not REALLY a problem for me now, but if i didnt have the storage space I currently have I cannot imagine having the space to keep this game, regardless of the other aspects being amazing. take a game like Genshin Impact for example. A FULL adventure game with an expandable map is only 9GB and this is 7.4? idk it doesn't make sense. that is one of my only complaints.

I'd assume if there's a stage as the background there would be the boys performing as well, like how the new LLSIFAS is and ENSTARS. I was disappointed when I saw that HEAVENS isn't included???? They're equally an important group in the franchise😭 I love the beat map nonetheless, never change that please.

I wish it were easier to obtain main story passes, leveling up can be hard and I want to unlock more songs! Everything else is absolutely perfect.

I highly recommend it. I love STARISH and QUARTET NIGHT! Also whenever it malfunctions it gives you more prisms which is really helpful.

I love this game, and the characters and songs never get old. But my problem here is that for some reason I keep getting exiting out of the game. And I tried to Clear Cache it to see what happened, if this happened with other players than there might be a reason why this is happening.

I’ve had this game for a long time and I enjoy playing it. But now I can’t get passed the loading screen. I get an error message saying that my game data is cyrupted and to fix it to clear the catch. I’ve don’t that and it still won’t load and I’m missing the events that are in the game right now. I would like to know if the new iOS update is having an effect on the game in anyway. It was working fine yesterday and I’ve been doing the same thing as I always do so I’m kind of stuck. 😔