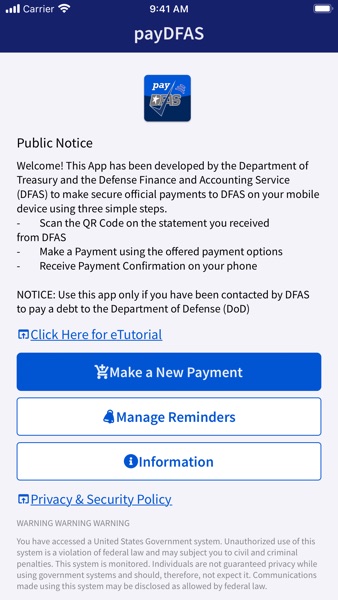 Payments on this app are for debts owed to the Defense Finance and Accounting Service. You will receive a debt letter from DFAS via mail or electronic means. Once you have downloaded the app, you scan the QR code on the letter. This will link to your debt account. You will see options for either partial or full payments of your debt. This is the official, secure method of making payments to DFAS.

Using this app is the most trash thing I’ve ever seen. Only option to pay. I got 2 different bills in the mail for 2 different amounts. It would be nice to know which I had to pay and what they’re for. This app gives no info at all, they only want money.

I don’t think I have to state just how stupid it is that we didn’t get an option to opt out of the social security tax deferment. What an absolute joke. Being on this app makes me seethe to my core. I’m glad I got out of the service. It’s a far cry from what it once was. It’s just a joke now just like this app. Too bad I can’t leave zero stars because I definitely would. It seems that any software that the government puts out is just 100% garbage. Never works, always has bugs and just all around is extremely unfriendly to use. I feel bad for some of the people who get debt thrown on them for no reason and have their credit like I did because of the government. Forcing your servicemen and women into debt is a GREAT way to get them to try and recruit others much less reenlist. I sincerely hope somebody sees this and decides to get out while they still can. Stay strong everyone.

Coming after me for 4.5 dollars in a multi billion dollar budget. Like really? My 5 dollars is what’s going to keep the military afloat? And it wasn’t even my mistake? If you have to use this app I hope it makes you realize you did the right thing by getting out. The military only cares about you when it’s convenient or it makes them look good. Eat the apple.

15 years after my service ended I stop getting my tax returns because these people garnished my returns for a $2000 overpayment I never knew about. Then because I never payed there’s over $2000 in interest .$4000 I owe. During a pandemic and a leader who’s made inflation go through the roof. Thanks for my service a..holes.

You are now attempting to collect all of my taxes you didn’t collect without giving me an option to opt out and you’ve made it the most convoluted process. You should let me keep the money considering how much work I have to do to repay you $600. The QR code you provided on the collection letter doesn’t even work. The form I have to fill out for installments is 7 pages long. YOU KNOW ALL OF MY DEBT BECAUSE YOU OWN ALL OF IT.

I paid the invoice in full in 12 feb, and got another bill on 22 Feb with interest charge. I saw they took the money out of my bank account but I’m unable to see what left i actually owe and I’m just playing a guessing game.

Say it with me. F&ck the government. I’m out of the military. I pay taxes. I sacrificed time away from home and family. Now I owe you back? While huge companies get loan forgiveness for millions of dollars?! ARE YOU SERIOUS???? Now I always tell people to not serve. The military’s a joke now. I filed a dispute, just for them to send the same bill FIFTEEN DAYS LATER. NOW I HAVE TO MAKE TWO PAYMENTS IN A MONTH. Or my credit will be wrecked and I won’t be able to take a loan out on anything. F&cking ridiculous.

First of all, horrible app and full of bugs. Second.. shame on you for collecting over $2,000 in debt close to two years after my deployment. Sure feels great to have all that money taken away from me in the middle of a pandemic. I fear for my my brothers and sisters who are not as financially responsible will be negatively affected by YOUR mistake and sent to collections where you’ll absolutely wreck their credit. Shame on you for making such a grave mistake and taking your sweet time to correct it. I’m glad I left the service in October. This only reaffirms that I made the right decision.

This is the most frustrating app I’ve ever used. Received $50 bill a week before it was due on Xmas eve. I went on the app like it said and it would not process my payment no matter what I tried using bank, card, or even PayPal . Kept saying error. Then go on their site just for it to say it’s down. Then a week later I get ANOTHER one in the mail and now they’re charging me $150?! How disgusting this company is. Served 12 years just to be treated like trash.

That’s all they are. Crooks.

Fix your app. You want me to pay the debt yet don’t allow me to process a payment

Wont let me scan QR code’s because the “OS is no longer supported”. Haven’t been able to figure out the issue. App is updated, phone is updated..... app is just trash like all other military stuff.

Why advertise it if doesn’t work!