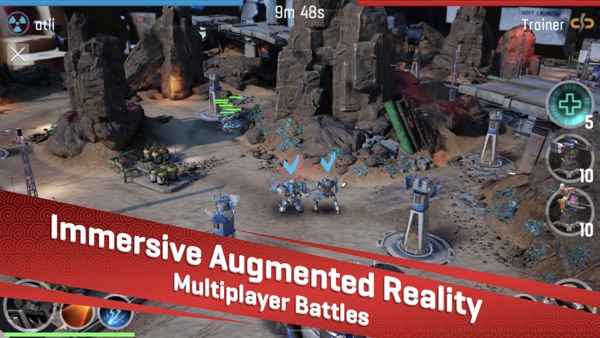 **As featured in the Apple Keynote**

“If you’ve only got enough money to spend on one AR game, then I’d probably make it this one.” – Pocket Gamer

“A must have ARKit game—Highly recommended and definitely worth its asking price!” – AR Critic
========
In The Machines, battle your friends in a breathtaking augmented reality world. Experience 3D sound, graphics, and gameplay like never before.

Use powerful abilities and perspective-based tactics to destroy your enemy’s base and climb the global leaderboard.

Victory or defeat depends on your skills, strategic thinking, and ability to maneuver yourself and your troops in battle.
========
VISUALLY STUNNING
The Machines uses advanced technology to push the boundaries of visual fidelity. The battlefield has over 1.2 million polygons and uses 4k assets and physics-based rendering to bring you a beautifully immersive game.

3D SPATIAL AUDIO
Your position in the real world affects the audio you hear. Move closer for louder action or disappear behind a rock and audio bounces off, just like in real life.

PERSPECTIVE-BASED GAMING
Your physical position is the competitive edge in this augmented reality battlefield. Use super weapons and abilities tactically by aiming your phone and adjusting your position.

COMPETETIVE MULTIPLAYER
Claim your place at the top of the global leaderboards by defeating foes around the world. Outwit your opponents with balanced, strategic gameplay. A single player training mode is also available to gain experience.

FRIEND BATTLES
Add friends via a unique invite link and challenge them directly to battle! Play against each other on the same table or anywhere in the world. See who is the champion on your friends leaderboard.
========
**If you enjoying playing the game, please consider leaving a review on the App Store. We really appreciate it!**

I purchased the game to play with my daughter. The link created when you invite a friend , does not work. It says server cannot be found So cannot play multiplayer

Keeps crashing. Please can I return and refund?

A bit bummed that it will not load on the new iPad Pro. :(. Hoping then can get this fixed. Would like to play the game!

After installing and restarting the device, the only thing that I have managed to get is a white screen before the game crashes back to the home screen.

So disappointed - our kids used their allowance to purchase and it won’t work on any iPad we have. Only their dads iPhone. Which we would have known to begin with!

I start playing this game early. Based on leaderboard I am first in world now in single player (“HiBye”) (12 wins out of 14). It is too easy. I want to play multiplayer. But it start searching and nobody found. Just i play once which I win. There are not much players or there is a bug? This is really a cool game. But without PvP it is worthless and boring. And... when other heroes will be unlocked? Tnx Its now about a month from the release of the game and still no proper multiplayer match making I most wait a lot I wish i can refund my money on this game It is really worthless Even there is no guild The heroes wont unlock I am still the first in multiplayer in world But i am not satisfied with the game Thanks Its about two months from the start of the game The game can’t start a multiplayer. Sometimes the field loads, but the players are not there. Apple dissatisfied me with announcement of your junk game in its AR release. I wish i can refund my money But at least make the game work Please...

I was pretty psyched about this game when I first saw it but after multiple attempts to select a table it seems like it does not like any I own. When I finally got it to work on a table a work it was 45 degrees offset. I have an iPhone 8plus. 3 other coworkers have had similar issues.

I’ve tried everything: kitchen table, coffee table, floor (carpet and linoleum), all of the above with a blanket/sheet, changed the lighting brightness and angle on all of the above, and it won’t find a flat area. I can’t find any instructions ANYWHERE, there’s no tutorial, and if there is it’s useless because there’s no way past the “finding flat area” part to even see if there is a tutorial. Developers, please help, otherwise I’ll be requesting a refund.

Can I have my money back please!!!

I bought this because past reviews said it was awesome and that updates really improved this game, but I downloaded this game on my iPhone 7s plus and my 12 inch iPad Pro and it does not align on my table properly. There’s no way to make battle field smaller. The border does not let you shrink it. This field is much larger than my 3 1/2 by 3 1/2 foot table. Therefore this game is not enjoyable because playing field is over the edge all the way around my table. Hope this can get fixed soon so I may enjoy it. Then I will give it 5 stars.

Game is not great. It drains battery and does not work properly

It said that tap the portrait while aiming the destination but I can’t do that. It doesn’t move

Running on 6S. Program says my device is suitable yet I get dark screen and a red message that’s says “plane not detected.” I tried to tap screen but nothing happens. Maybe this game doesn’t work.

I couldn’t get past opening the game. I have an iPad Pro and I guess it doesn’t like the device. I wish there was a way to get refunded. This was a total waste of money

iPhone 7+ iOS 11 and the app is poorly responsive. To move through the tutorial tapping the next on the info bubbles requires a precision tap in the right spot at the right time lol. Finally got to the “To move your Hero” bit and no matter how I positioned the cursor in the highlighted area and tapped on my Hero’s portrait in the lower corner... no dice. To buggy and not responsive enough for a $5 app out of the gate. Will be requesting a refund.

The interface is buggy and unresponsive. BIG WASTE OF MONEY and disappointment! Save your money.