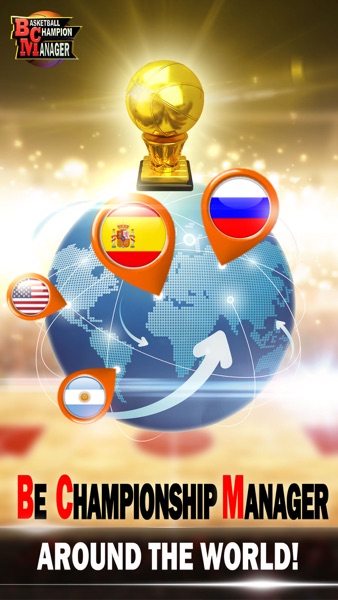 Be the best basketball manager in the world!

In the world of Basketball Champion Manager, you will take charge of every aspect of your team:
-decide on training courses according to your player’s strengths
-arrange video analysis for your best players
-update your Arena and decide on the ticket prices
-bid for better players with managers from all around the world
-designate your scout team to find potential rookies
-choose your offensive and defensive tactics to counter your opponent
-compete with teams from different countries
-enjoy the most realistic game engine!

The game goes straight to a black screen? I’m getting ready for playoffs and a big cup game.

I can log onto this game no problem. When I close it my data is gone. I HATE THIS. All my work, gone because of this stupid glitch. PLEASE FIX THIS BUG.

This game used to be a lot of fun but with the latest changes and the pay to win mentality a new player can come in spent $$$ and compete with someone playing for 20 seasons. The tokens you receive from stadium tickets and activities are not enough to compete so unfortunately it became an absolute pay to win game......

My team KGoat513 has been hacked I had 30 mil in coin I’m my account and can’t access none because my account is gone I created a Union it’s called KG513 I purchased the diamond package for 99$ and I can’t recover that account when I try it say my account does not exist this game I invested a lot of money in too not be able to recover my account is frustrating I was watching a game for my team over a week ago when the screen went idle so i touch the screen to check on the score and when I did that it had my career being started over with none of my purchases applied 30mil still in that KGoat513 account with over 3k plus diamonds and all of that was lost and I don’t know how or why but this game is a scam n a rip off and I will like to get my account back KGoat513 or I want a refund for everything I purchased on that account I was still getting charged for the game and wasn’t even receiving no diamonds or coin so to the developers I need my account back KGoat513 or my refund for everything purchased towards that account.. This game a dud you get to good they hack your game somehow..

I have been playing for a while and can not access support. I think these people are making a cash play before shutting it down. I have traded 3 players under 30 years of age and 6+ star rating above 55 overall. At the time I purchased them for development paid over 30 million coins and when I recently sold them did not receive even 1 million for the 3 combined. I have bought lesser players for more. Seeing this I have tried to contact support and the page is not available. This game has become a scam. Stay away.

This used to be a fun game, but the simulation engine seems to have changed. My team now constantly loses to weaker teams even with the proper game plan. I suspect it favors those who pay to play.

I love this game but this new technique badge has ruined the game. They keep trying to find more ways to get money out of you. Never been so irritated with a game. Don’t download or it will get you too

You really need to develop some way to play more interactively with friends. allow teams to play scrims against teams from their friends list at least. A better option would be allow people to create leagues against people on their friends list with a minimum limit of teams to create the league. Also trading should be implemented within leagues if there is not going to be friend based leagues .

See title It’s fun but there’s a problem where people use multiple accounts to give money to a newer account and I’ve tried reporting the accounts to no avail. This is bad as it ruins completion and basically can give people $100 worth of gold for free in game when they play it right.

I reviewed this game earlier as a good game, but I spoke too early. I hadn’t hit the pay wall yet. At a certain point, it’s straight up pay to win where people have double the salary you do, but somehow aren’t over the luxury tax. This game has a lot of work to do to balance buying wins with skill.

Fun game but if you have to wait 5 min every time you click a button it’s unplayable. Please fix the lag.

The developers are thief’s and take payment for items purchased in app but do not credit the account. I made a small in app purchase in hopes of allowing my team to advance in my league. That was on the 2nd of August. It is now he 11th if August and I have yet to hear back from them aside from the first day. I have repeatedly messaged them in hopes of even a reply of acknowledgement that they were looking into this, but nothing. Do not download this game.

With the latest update they have taken out the ability to set your ticket prices. I had it set at 210 and now it is locked at 54. That is almost a 75% drop. There is no way I will be able to maintain my players salary. Was fun while it lasted.

I tried to play and really wanted to like it, but I can’t get past the horrible English in every aspect of the game.

I downloaded the game, spent money improving my team. Then they updated it to the 1.13 version. Every time I tried to open the app, it wouldn’t let me open it nor would it let me download a new version. Just kept redirecting me to this page. So I deleted the app and downloaded it again. All my team is lost!!