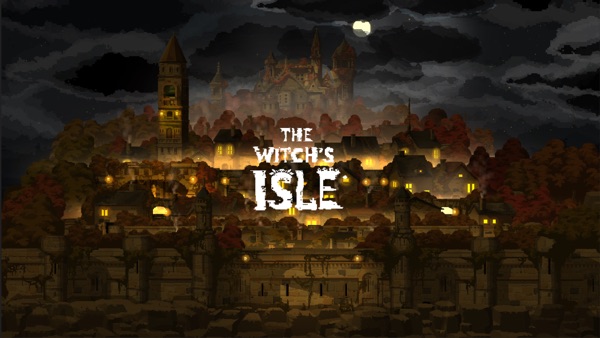 I fixed a bug that suffered for a long time.

On a solitary island somewhat removed from the continent, there is a town—a town ruled by a witch.

One night, one of the villagers gets a sudden visit from a witch, who puts her under a curse. If she doesn’t find the witch’s stolen urn by 4:00 a.m., the curse will kill her. She begins her search, but along the way she starts hearing more and more about the secret of the witch.

– “The Witch’s Isle” is a puzzle-adventure game. Explore the island as you search for the urn and uncover the mystery of the witch! The dream-like scenery of the solitary island town and the people who live there await.

– See what the islanders are up to! In this game, not only can you control the protagonist, you can also have the camera follow other characters. Maybe you can solve some puzzles by paying close attention to what the other islanders are doing.

Can’t untarget and do anything else.

Liking this game so far but it keeps crashing on my iPad :(

So far I have only played through it once and I LOVED it. The art was great and the lore really draws you in. There is on problem which is why it is only a four star. I couldn’t see the end. When I actually got to the end and triggered the final cutscene the witch was off screen and so was her speech bubble. I could see the very top of the bubble in the bottom left corner of my phone and that was if. I had no idea what was going on. I thought maybe I triggered the cutscene but then moved away but it would only trigger where I was originally standing. Restarted the app several times and it made no difference. I’m so far hoping it was a one-time fluke, but it was kinda disappointing. Will definitely play again to see if I can fix it. One other thing is the controls. They are a little slow. I like how they are, but maybe a joystick or something would make the game flow a little better (especially on mobile). Not a huge grip, but just something I figured I would mention. In the end though I absolutely love the game and can’t wait to keep playing!!

This is an amazing, immersive adventure with engaging gameplay and a good story to go with it. It deserves more attention. However, the true ending lies in this weird little mechanic you have to notice quickly from the first time you’re in the Witch’s Castle. I wouldn’t have known the ending I got, which was very unsatisfying, wasn’t the best I would get unless I looked up the various endings. Look for the tutorial on YouTube. Otherwise, excellent game!

Love the game but wish there were more endings and paths. What really annoys me is that there is a glitch where I get stuck on the ramparts and can’t get back up to the other levels.

This game was so fun! I downloaded it to play while stuck in Hurricane Irma and couldn't put it down. Super fun puzzle, but the only reason it's getting a 4/5 is I closed the game by accident and lost all my progress because I forgot to manually save. Which I think is lame. Also, I wanted so much more from the ending!! But it was well worth the play.

Way too many glitches and game keeps closing out. Got a decent ways through and made a character a target and now it won't let me remove him as my target. Had to start over, but now it freezes on the start up screen. Very frustrating and would love to keep playing but it seems I will have to delete it for now until the developers can work out the glitches. RESPONSE: I am using an iPad with IOS 10.3.3

Not sure it deserves a full two stars. I solved with and without the sword (the sword is to the left of the witches throne room go left at top of stais before you click to enter throne room to get the sword.) Very slow pace, difficult to solve only because it is so counter intuitive. Every time you click on a character it repeats tired dialogue. The art and scenery is interesting, good concept just needs more content and faster pace.

Bizarre deus ex machina?? But it could have been forgiven if the plot was constructed better. 3 stars is generous considering

"Targeted" another character (why does this feature even exist?!) and now can't back to my character or control the game. Also can't restart bc it still goes to the other character. Buggy.

the reason i'm not giving it 5 stars is bc ive been searching everywhere for the last character ( the one after the witch on the character list) and i have no idea where they are. can someone help?

I "targeted" another character, and can't figure out how to change or get back to my character. Can anyone help me?

Changing my review and rating it with 4 stars now. I finally figured out how to go about to finish the game. The game and story is pretty interesting and the updates helped a lot. The reasons why I am not giving it 5 stars is based off of my opinion of the normal and true ending. Besides that the game is pretty good and entertaining and I will play it a few more times for the alternate endings.

Good art and music. Plot didn't really make sense. Especially normal ending. ?? So much focus on the art and mechanics, but no effort was put into the dialogue or plot making sense. Slow to walk all over the map. Even if you know where something is supposed to be, it can be hard to find it because you may have to go into a secret area or walk to the other half of the room. Needed hints a couple times when it turned out I already knew where to go but I couldn't figure out how to get there or wasn't getting close enough to the item. Annoying how scattered parts of the map unlock with events.

This is a worth for any player but it's just so slow when to talk wt villager on other hand, I think you should be skip talking when someone talk nonsense!

Interesting enough but the gameplay gets tedious. Running back and forth repeatedly for the same stages each time, and no skipping dialogue during the game makes me not really care enough to play through any further. Was entertaining enough for a few hours.

This isn't really a puzzle game but more of a click around and hope the story progresses. Though the game design was interesting at first, it later proved to be very cumbersome. You have to be constantly clicking to move and the only way to know you've hit a dead end is to click five times to make sure you can't proceed. There is no logic to some of the story progressions where you literally just have to roam around and stumble on the next step. There were also times where I had the right answer but the game wouldn't let me use the item. Naturally I thought this wasn't the answer and left but when I came back after having done nothing the item worked. What a waste of time! Not to mention having to start over completely if you don't finish the game in time

Look, I love this game. It's beautiful, it really is. But once I finished all the keys, I'm completely lost on where to go next. I can't figure out how to get into the castle. The game definitely needs some More guide on what to do and how to do it, etc. I also think it would help a lot more if paths were easier to find and what not as I've seen many people say they can't find certain areas

the game is beautiful, and i love the story plot line, but.. the fact that time runs out and if you dont finish the game restarts? thats insane. i was at the forest handing the theif's friend when the time ran out. that was so frustrating because thats when i was about to finish. so please, do something about that.

Would be ok except you can't break through the well wall with the ax, which means you can't really finish the game properly. EDIT: Turns out that you just need to use the ax in a very difficult-to-predict location with no visual cues. My rating still stands. I completed all quests to 100 percent, but was left with no way to finish after that. Seriously, the in game hints (thank god for those) don't even help here. Time ran out and that was it. Bad ending.