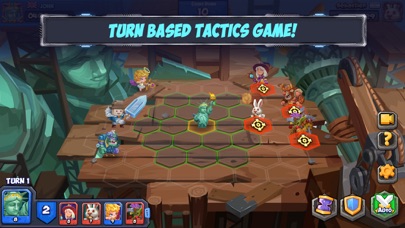 Seeking a challenging new adventure that requires your cunning strategy and outsmarting tactics?

This real-time & turn-based hex grid tactical monster RPG card game is just the right one for all war and battle strategy fanatics, board game (chess) lovers and RPG gamers. Experiencing fast-paced 3-5 minute strategy battles and whimsical gameplay in the world of Tactical Monsters comprised of fantasy monsters from all time and space.

GAMEPLAY
Choose your perfect formation of tactical monsters and conquer the epic real-time multiplayer gameplay in this final fantasy war game. Outsmart and destroy your opponents by strategically positioning your monster heroes before battle and tactically controlling their actions in battle.

FEATURES
● Unlock numerous PVE stages to win all 3 stars;
● Set the optimal defense formations and layouts in Mine Defense;
● Sharpen your tactics by visiting Monsters Academy;
● Duel real players in real-time live PVP to take their thrones and claim the world treasure chest;
● Endure through the Guerrilla Warfare Mode (Survival Mode) to defeat the never-ending BOSSES;
● Collect, recruit and upgrade unique monsters:
● Unleash a variety of powerful hero cards from Franky the Frankenstein, to fantasy monsters like Medusa and Griffin, to culturally established creatures like WuKong and the Mummy, to monsters you’ve never seen before such as Bigfoot and Nobu the ghost samurai; Each one has its unique background, job and ridiculous destructive skill such as the world-ending skill “the nuclear warhead” from Dr. Walter’s Mecha Machine;
● Play with friends from all over the world
● Enter 1on1 matches with new friends worldwide;
● Ally with your clan mates to chat tactical strategy knowledge, to share and to trade hero monster cards;
● Build your own clan defenses to fend off the enemy raiders and rank for the #1 clan in the world!

COMMUNITY
● Email us at support@tacticalmonsters.com;
● Follow us on Facebook to get news and updates: www.facebook.com/tacticalmonsters;
● Join our Discord channel to chat strategy: https://discord.gg/XYHhgB4

– Premium subscribers will receive 200 gems every day, 500 extra gems upon first purchase, 20% increased gold from Arena PvP, unlock Guerilla Warfare Raids, the ability to send clan members gifts every day, a random batch of cards every week, the ability to preview enemy formations of previously beaten stages in the Rumble Tower. Premium subscriptions will be charged on your iTunes Account after purchase and when the subscription renews.（one week/one month/one year）

– Subscriptions will renew automatically unless auto-renew is turned off at least 24-hours before the end of the current period. \n- Payment will be charged to iTunes Account at confirmation of purchase.

– Account will be charged for renewal within 24-hours prior to the end of the current period.

– Subscriptions may be managed by the user and auto-renewal may be turned off by going to the user’s Account Settings after purchase.

– Any unused portion of a free trial period, if offered, will be forfeited when the user purchases a subscription to that publication, where applicable.

I like this game so far you can upgrade monsters to see the stats they are and going to pvp but only the problem is the crashing part, I still don’t like when it keeps crashing like that but still I like this game.

If you are playing pvp will be match with players 5+ levers above you.No fun.Second issue I have is after spending hundreds of dollars customers service advised me on my problem is to delete all my accounts and not playing.Well I did.What company does that?

I have been playing the game since 2018 and only recently have left the community due to some issues I had regarding recent nerfs on units I spent money maxing and also quite a few veterans leaving the game made me question the direction the game was going. Aside from this it’s a top notch game. Other than brave frontier which l quit playing back in 2015, this game is the only gatcha game that I spent heavy money on and without any regrets. Had tons of memorable game plays/moments but most importantly I made tons of friends on discord and wechat. I would recommend the game if you are into srpgs, but regardless as a trail basis I would still suggest to dabble into it. Just be aware that if you are playing as a f2p player progression will be slow. Join an active clan, be patient and join their discord community for weekly free gems and monthly events which in the end gives rewards— gold, gems and cards (depending on tier and quality of event submission). If you are planning on being a p2p player then I would suggest holding back for now especially after recent nerfs as this can throw a curve ball into your team planning, and also at least until you are ready to commit to the game. It took me a year and four months to commit to the game financially because the game gave me so much entertainment; therefore it became imperative that I gave something back as a sign of appreciation to the development team (At the time I was not playing competitive so faster progress was not in my mind). Overall it’s been a 5 star experience for me.

It was mine blowing

I’ve been playing for about 2 years. I attempted to bind my account and lost all my progress. I actually had a lot of resources saved up and a decent amount of strong characters. But not anymore, I will update this once I hear back from their customer service.

I’ve played this game for several years. Even put money into it at one point. I stopped playing for a while and recently came back. I just tried binding my account so I wouldn’t lose anything. Something the game prompted me to do. It erased all my data. I had all but four of the characters unlocked. Seriously disappointed but I guess it’s my fault for not binding the account sooner. Don’t make the mistake I did. Play the game, bind your account!!

The game is excellent. I love it! I just wish the developers can address the home bar in iPhone X and beyond that are with a virtual home bar. It is quite distracting and even bothering at times. Wish the developers have a way to hide it during the gaming.

I just started the game and got over 5 legendaries! I’m level 7 right now! BEST GAME EVER

The devs offer a promo where they’ll give you 500 units of premium currency if you join a specific channel in their Discord server, enter your player ID number and “wait patiently up to 72 hours” (which in and of itself is lazy and ridiculous). I did exactly as instructed- joined, posted and waited the 72 hours- and, of course, received nothing. I then immediately uninstalled on principle as I have absolutely zero interest in supporting dishonest developers who make false offers and cannot be trusted. I can not and do not recommend this game to anyone.

Haven't played this game in awhile. i go to play heroes tactics and it says update it. i click update and then see this?! wth is this and what happened to such a great game?!

Play it all the time

It’s a fun game so far, but my issue is the mine defense game uses AI to control your team and unfortunately it can be very stupid tactical wise. I’ve watched many time when I would lose because my team would not move or attack in the most efficient way. There should be an option for you to take control of your team if you initiate a battle in that mode

Would be a fun game but if you beat people with strategy you eventually match only with those with guys 3-4 levels higher than you. No strategy or competition involved there, and you lose every time. Would be a lot better to play people who have similar level guys.