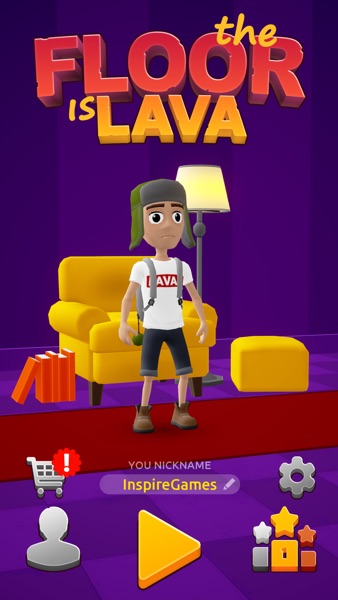 Try to challenge yourself!
Run across the room as far as you can, collect coins as many as you can, open all characters.
But remember – THE FLOOR IS LAVA!

Every day it brings me back out

So I redownloaded this game and IT CRASHED ON ME SO THIS IS TRASH DONT DOWNLOAD THIS GAME.

A horrible game there are so many ads and I can't even get past the first one.

I liked to play games of the floor is lava until I played this game. The graphics are terrible and when you are going to make the jump, it says you died. Now that is some stinky stuff about this terrible game plz fix this soon!

First of all the characters are way to expensive for the game. Second of all there’s a stupid bug for when you want to play it doesn’t show the platform or when to jump. Third of all the ads are terrible they come up whenever and are so annoying!!! Do no get this game it is a waste of storage and time.

This used to be an actually fun game. It was easy to pass time and I would’ve given it a five star review. The new update made it plain STUPID and therefore the reason I’m deleting it.

Every time I’m in an middle of the game it pops up a ad. Some reason they had to put adds in this game is to annoy people! This game could be a lot better!!!!!!!!

This game is not fun what so ever.

At first I was having fun but after a while it was hard to jump and I was dying and the ADS! So meany ads too meany... this game needs LOTS of work and right now I recommend not a play it for now

It’s terrible because when your playing ads come, and then you die! It’s stupid! There are WAY better games than this. DO NOT GET THIS APP.