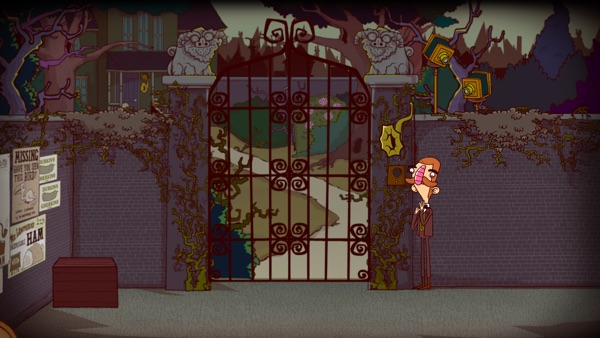 The year is 1884 and Victorian London is ready for the greatest Adventure ever told.

A wonderfully whimsical Point and Click game – A Bleaker Predicklement is a story driven detective adventure with over 60 scenes.
Can you solve the puzzles and help Bertram Fiddle finally track down the despicable Geoff the Murderer?

Explore dark alleys, talk to suspicious characters, uncover the evil plot that threatens Victorian London in this comedy murder mystery like no other.

A beautifully animated Adventure Game, fully Voice Acted and filled to the brim with gloriously detailed artwork and terrible, terrible puns.
Inspired by Hammer Horror, Sherlock Holmes, Dickens and Monty Python, it may be the most British game ever!

“The game has done a perfectly Adequate job capturing the charm of the first game, only on a much bigger scale. As I unlock more of the story, I’m continually surprised and delighted.” – Appunwrapper.com

“If you enjoy puzzlers, this is definitely for you. The quirky voices and music fit the game perfectly, but the most noticeable thing is Bertram’s strange nose – I’m assuming it’s this large nose that helps him sniff out the clues.” – Oksana Ryan, Pocketgamer.co.uk

Every time I go into the bakery and touch the oven dial the game crashes. How very disappointing.

It’s clear that a lot of effort has gone into this game. However, what you are supposed to do next is often not only confusing, but bazaar as well. I’m fine with bazaar, but the reason you are doing the bazaar thing needs to makes sense. It’s a shame for the game makers to go to so much effort to create the game and then fall short in the plotting of the clues.

As previous reviews have alerted. This sequel was abandoned. Issues with the game across the board. Buyer (luckily only .99) beware. A pity. Will not entertain any future downloads from this developer.

It was great up until the last chapter. Now I’m stuck in the soap factory again. I’ve replayed the beginning of this chapter multiple times in the hopes that I could get past this bug. But every time I go to the soap factory I literally get stuck. Fiddle can’t get back in the boat to get back to town. So this game has ended up being a waste of money since I can’t complete it.

Great artwork I loved the first one, this one keeps crashing and then turning black out to be unplayable. Will change to 5 stars when I'm able to play through the whole game.

Loved the first, was excited for the sequel but can’t get passed certain areas due to animations continuing with no audio or freezing animations. Also please support iPhone X resolution.

I've restarted my iPad and re-downloaded the game three times.... It still crashes. So frustrating and disappointing. Is Rumpus still working on fixing the bugs, or is this game just DOA?

The art is amazing, but the bugs prevent you from completing the game. In one scene, my screen shrunk so I could only see the feet of the Bertram and Gavin. I cannot progress because the screen will not return to normal size. There have been a lot more bugs I’ve encountered, this is just one example of them.

I was looking forward to this chapter, having enjoyed the first one very much. But this crashed so often in the first chapter that I can't even play it. Total waste of money!

Ugh I can't even get passed BF getting the phone call in the first scene. My app just goes out. Love these games. Just want to be able to play part two that I purchased.

This game freezes on the opening frame of the game on the Rumpus! screen. I want a refund.

Still unplayable. Doesnt even go passed the opening scene in chapter one....

I was able to get out of the dining hall. But now I am stuck in the attic. Maybe allow for a chapter selection so we don’t have to restart.

Love this games but even after the update it is still not working. Keeps crashing I haven't made it past the first seen. Hope this get fix soon I really want to finish it.

The inventory is incredibly frustrating to open, half the time it just makes Bertram move around instead of opening. Also, the audio is very bad. The dialogue is constantly overlapping and cutting off making awkward silences and just ruins the overall feel. Can't say I enjoy this one, sorry. 1/5

It completely shuts down after first scene. I've been waiting on returning for a refund, hoping for an update, but I think my patience is about to run out. Unless there has been an update after Sept 5, don't bother.

Currently unplayable. It keeps shutting down and restarts the beginning scene so I can't go any farther. I hope they fix this soon!

Go back and fix the bugs again. The update is still not working.