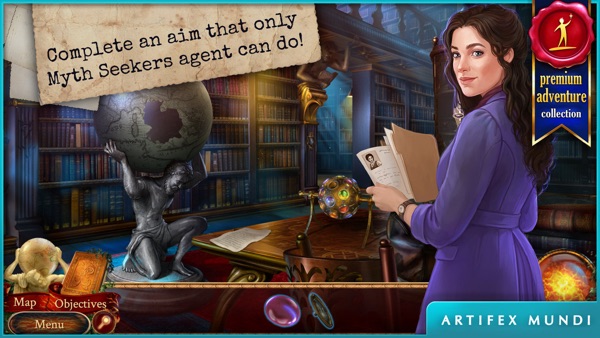 FANTASTIC HIDDEN OBJECT PUZZLE ADVENTURE GAME FROM THE CREATORS OF ENIGMATIS AND GRIM LEGENDS!
As the 1920’s draws to a close, political tensions run high in Italy. When a member of the top-secret Myth Seekers agency goes missing, you’re called in to discover the truth. Can you recover the Hammer of Vulcan before havoc is unleashed by the ancient gods? Explore picturesque locations across modern Italy and solve challenging puzzles as you clash with the deadly foe of the Myth Seekers!

BUY ONCE – ENJOY ENDLESSLY!
Unlock the game to own it forever!

You play as Amelia, a brilliant expert on Roman mythology and a new asset of the Myth Seekers agency. Your assignment is to continue the investigation of a fellow operative who recently vanished under mysterious circumstances. The first order of business is to locate the Vesuvian Codex and get in touch with an Italian agent named Lorenzo. Together you will need to track down the powerful artifact called Vulcan’s Hammer. Time is of the essence as evil forces are also looking for the relic. During this stunning adventure you will travel across Italy, solving countless puzzles and looking for clues in hidden object scenes. Learn the truth behind the destruction of Pompeii and face off against the enemies of the Agency as you race to prevent another catastrophe!

It was a little short and does not have a bonus game at the end. The artwork was fabulous and the story line made sense. Puzzles were pretty good though a few of them had instructions that were hard to decipher.

Awesome relaxing game. Play at your own pace.

Sometimes you had a sentence at the top of the screen and a note showing at the same time, Often I couldn’t get both read before they disappeared. So then I felt like I missed out on some of the story. It was way too short with no bonus game. For the discounted price, I was willing to give it really 3.5 stars

Every single time I reopened game, I noticed I had lost a few steps of progess (ie. items that were in my inventory had to be found again). Otherwise high quality game.

Enjoyed this game. Held my interest throughout. Agree with previous reviewer, would love a bonus chapter.

Highly recommend! Game was fun and no glitches. There were morphing objects to locate in each scene, and a twist on HOP which was nice. I like the variety of options on degree of difficulty. There are games that only allow a few options. 5 stars! Enjoy 🙂

Good storyline and graphics. Has kept my interest.

I really like the story and graphics. I would like it if you could go back and get the collectibles, and morphing items that you missed, like other games do, and a bonus chapter would be nice. But the game was good

Loved everything about it!! Voices, graphics, story, and HOS great eye movement on all your characters which made them alive!! Wish there was a bonus game.😞

This was an awesome game! You guys always bring it. I love you guys so much. I check the App Store twice a day, everyday, to see if you might have put up another game. When I see that new game listed I'm ecstatic and run to buy it!!! You guys are the absolute best!!! Anyone reading this review, get this game! It's really good. All their games are great and priced reasonably. Artifex please keep bringing us these amazing games!!!

Such a Great & Unique storyline with gorgeous graphics and special effects. The character voice overs really pull you into the game. Loved the variety and interactiveness of the hidden object scenes. Puzzles were fun and challenging! Morphing objects and a teleporting map provided. I always look forward to this companies games as they pay close attention to detail in creating their storylines. What's not to Love!! Thank You Artifex Mundi for such Great & Enjoyable entertainment. Sorry to see this end - looking forward to your next release! KdBoots 😀 ❤️ 👍

Excellent game!! Hope to play more from this series.

Most Artifex Mundi games are the best especially the graphics and the story.

This was fun, I loved the storyline. I did have a couple of glitches, and it was too short, lol, most are.

This was a beautiful game which interwove Roman mythology and magical artifacts. You could customize settings. The graphics were visually pleasing, although not as crisp or sharp as I would have expected, considering that the developer was Sunward games. Loading was instantaneous between locations and there was a marked teleport map to transport you throughout Italy, as well as through portals in time. Collectibles were of two sorts: morphing objects and astrological runes. Inventory items were labeled and there were complex items to assemble. You were able to manipulate certain inventory items by turning them around; I enjoy different ways of looking at items! You also had several magical artifacts to use. The HO scenes had some variation, and there was an alternative matching game during some of the HO scenes. There was no cohesive journal but objectives were regularly updated. There weren't a ton of puzzles/games; most were rotational or simplistic. The game did run very smoothly. However, there was no bonus adventure and the backgrounds were unable to be saved as wallpapers, which is unfortunate because several were quite beautiful. I deducted a star for length and for lack of excitement; I was a bit bored during the game. However it was a nice change from gore and horror! As a rule I love games based on mythology and archaeology. This game was a bit too simplistic for my taste; that doesn't mean it wasn't a decent game. This game was definitely worth playing at the discounted price. Happy gaming, everyone!

Why are there never any written walkthroughs for these games?

This developer never fails to impress me because they create games that combine novel story lines, impressive settings, and interesting characters. I love the adventurous and action-packed atmosphere, as I play a daring and resourceful member of the Myth Seekers, who travels through the old-world cities and ancient ruins of Italy during the 1920s in search of an ancient Roman artifact, which is capable of mass destruction. The supporting characters add depth to the storyline, as they contribute toward your experiences by helping you reach your goals. Furthermore, you must fend off some mythological creatures who try to thwart your objectives, such as a giant one-eyed Cyclops. This developer always delivers superior artwork, and my eyes are mesmerized by the realistically rendered details that adorn the beautiful illustrations. I appreciate the current-trending approach of analyzing and manipulating objects/contraptions by turning them around to interact with each of their other sides. You can customize your settings. The inventory is labeled and interactive; items require assembly. In custom mode, the teleport map facilitates brisk travel to labeled locations and indicates available actions. Transition between scenes is smooth and quick; no glitches. Your objectives are regularly updated in the Book, which is located in the lower left-side corner. The varied HOSs use items that suit the mythological theme of the storyline. The puzzles are simplistic in nature; but they are entertaining and creatively executed to carry on the storyline, as well as solve some hindering predicaments. One type is to use ingredients to create a restorative potion for a relic. You discover several collection sets, which are hidden in plain sight. In summation, this game has the whole package, as previously outlined. The only quibble is that the length of the game is short. Other than that, I think that this is a technically sound game, with a nice variety of interesting HOSs and puzzles. I took off a star solely for the length of the game. It's well worth the discounted price, though.

This is a great game. Beautiful graphics, hops, puzzles and collectibles. I am enjoying the story, too. This is well worth the money. Great job! A game I can let my granddaughter play for a change.