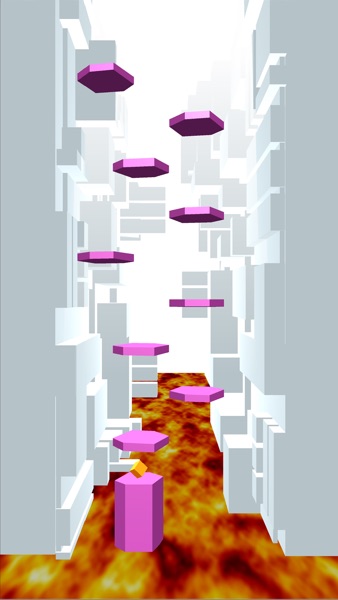 This app has been updated by Apple to display the AppleWatch app icon. * Bugs Fixed

Tap to jump up right or left and stay on the platforms to go higher and higher to avoid falling into the lava on the floor!

How to play:
> Tap right or left
> Think fast, the lava comes faster the further you go!

How long can you last?

Ther are way to much it🤬

Really i dont know why people are complaining. It’s good all you need to do is to jump to side to side. And, yes it is hard, but you have to go fast and its a little fun time waster.

I too was looking for the the game hot lava on Apple Arcade but to my surprise it wasn’t it. This game is flawed because there are no different levels it is just the same thing over and over again. I would definitely not recommend it to people.

There are no different levels other than what is shown on the picture. That’s it. It’s not a bad game. It could be smoother. That’s not the problem though. The problem is that once you get in the game they show different levels, of which do not exist. They give you no score you need to get to to unlock the next level. I’ve made it to ninety, that exact number, multiple times, because the lava overcomes you at that exact point. You literally can’t go past that point, your whole screen fills up with the cheaply animated lava, that doesn’t even match the rest of the animation. This game could be great, but the fact that the game only has two example pictures, a 4.8 star rating when only a hundred people have rated, and LIES, should be a definite turn off.

Not the the game I was looking for I was hoping for it to be easier to unlock the next level.

This game could be fun but when you can only see one or two platforms ahead of you at a time it completely kills any chance of getting in a rhythm and moving at higher levels. Show me the full screen of upcoming platforms like it does at the start.

I was looking for the new game on apple arcade called hot lava but this one doesn’t require me to update my phone and iOS. It is kinda difficult because I have yet to win. I’m not even sure if there is a finishing stage. So far it only counts how many jumps you make before you get killed with the rising lava.

This is marked for ages 4 and up. But the game opens with spam and tons of click bait that take to inappropriate sites. I read all the reviews afterwards and they seem suspiciously generic / auto generated. I would report this to apple if I knew how

I love this game so much.

This game is a fun game. It goes along with the 2017 year challenge. It is not a begging I think it is great for kids. It teaches them how to stay focused.