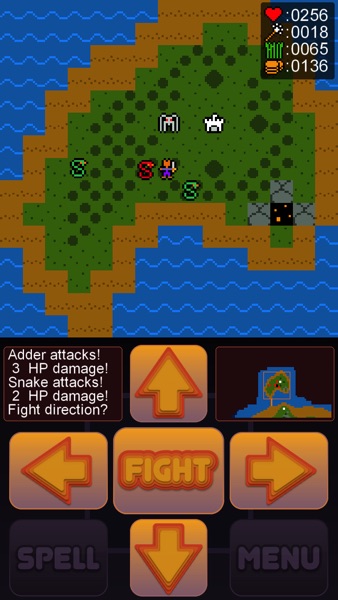 “Lowlander II is a great game, possibly the most enjoyable, largest and best produced game of its type available that’s not got the Ultima name attached to it. ” – My Boxed Universe

Yarak means business. She ain’t got time for you! Get that armor on- there’s adventuring to be done!

Generations after the mighty LOWLANDER vanquished the nefarious Azamon, a new villain has arisen. The evil enchantress, YARAK! The realm needs a new hero — will you be the one?

Styled after the early Ultima games from Richard Garriott, Lowerlander will make your iPhone 7 Plus feel like an Apple II+. That’s a good thing! Plus, Lowlander’s new sibling packs the same one-handed portrait-style gameplay that sensible people prefer!

TouchArcade had this to say about the first one’s shameless imitation of Ultima II: “4.5 stars … Lowlander is an interesting case, because it’s not often that a game paying direct homage to a classic is actually better than said classic.” Unquestionably undeserved, but that’s high praise!

– glorious one handed, portrait-style, retro-RPG action
– over 16 hours of minimalist adventure
– explore a huge world, gain experience and rise in power
– delve into dark dungeons for loot and riches
– three save-game slots
– save games to the cloud and download them later or to another device
– no in-app purchases. buy once, own forever
– special spell and environmental effects
– OVER 8 colors
– realistic moving water and lava

What an awesome game, so fun and brings back so many great childhood memories of adventure and exploration!

After getting used to a few of the mechanics(no diagonal attacks, have to wait a while between sleeps to add hit points from sleeping in a bed) and learning to love a bit of grinding to get a higher level character, I’m enjoying this title as much as I enjoyed the Ultima series (I-V, I lost interest when they changed format). It’s great that it’s on my phone, now I look forward to waiting for my flight/uber/girlfriend to arrive!

If you are looking for a game like Ultima 2/3, this and Lowlander are for you! The developer is also very involved in the thread for the game. You just do not see that! I wish there were more games like this, but it would be bad for me. I would probably not be married if there were! Kudos to the developer! The game itself is very detailed. The world is large and the quests are many. If you have some time to get involved in a game, pick this up, make sure your fridge is stocked and start playing...

For a fan of the Ultima series, this was the perfect game! Just challenging enough to keep me interested, but easy enough to beat without needing a walkthrough. Please make another! I'll pay!

For the life of me I can't get past jorge in castle shebastion! I wonder if it's glitching...sprite at the top of the castle says you can bribe the NE guard but I haven't been able to figure that out either...please help!

I have great memories of playing Ultima III on my Commodore 64 back in high school, and this game does an amazing job of recreating that experience. Truth be told, it’s actually much better but I don’t mean any disrespect to Lord British. Loved it, and highly recommend it.

This adds more quests, with the result being that it is more challenging than the first. Another well balanced game where the challenges/food/money/weapons/mana all have to be watched closely, but not to the point of dying all the time. Lots of cultural references. Lots of quests. No bugs. Multiple save slots Lots of fun. Better than the original Ultimas!

For anyone who likes RPGs this game is the real deal. Fun for a few minutes at a time or for extended times when you just have to solve that next quest. Well done!!

Really good mechanics. Bad part im stuck with nowhere to go and i cant get my ship. I cant give more stars because currently my save is unbeatable. Im not sure if the ship im supposed to get bugged out or if I’m missing something but i have been everywhere and talked to everyone. Ive spent two days searching for the ship and still have no leads.

I had been looking for an Ultima-like game ever since the app was removed from the store. I absolutely love the this game. Although I’ve just started playing it today, i’ve already logged in 3 hours of game play. The creative use of ultima combined with novel characters and a complex series of story lines is making for exciting play. Worth the money for sure

I had been looking for an Ultima-style RPG like this one for a while and I’m glad I found Lowlander and now this game, Lowlander II. It is a truly entertaining, addictive, and multi-layered game that will keep one playing and never become bored. There are new surprises in every town, castle and dungeon and the people in the towns are hilarious. I cannot recommend this game enough. In your quest and multiple mini-quests, you discover improved modes of travel as you fight enemies (human, beast and inhuman), keep up with your food supply, upgrade your weapons and armor and discover the means by which to finish the game. Yes, there is an end, but I wish there was not one. All mini-quests are logged so you will not have to try to remember who to contact in which town, etc. There was an error message in my game but the developer, himself, kindly fixed my game and sent it back to me. There is even a “Contact Developer” button in the options screen. Will there be a sequel? When you play this game, you will only hope so.

Plowed through and just finished both Lowlander and Lowlander 2. The developer did an amazing job and is very responsive to his community. Whether you played the original Ultima’s or not I highly recommend both of these games.

This game might look pretty rough on the outside, but it is a well crafted game that can take countless hours off your hands. The story took me days upon days to complete, and all the quests in between were intriguing and some were actually pretty funny. There are many references and secrets here and there, and I’ve only ran into a one or two bugs.

Glad I am finished, because playing this took all my time for the last few weeks! Outstanding. If you played older adventure games like Ultimata this will be right up your alley.

Great gameplay. The combat works and scales well. I have not come across any bugs. I keep coming back to play. Thanks!!

Game delivers on everything it promises. The dev is incredibly responsive and kind. Only iPhone game I’ve played all the way through (about 17 hours of content).

Don’t be fooled by the old school graphics, this is a deep game with a huge world. Progression is smooth, with just the right amount of grinding to improve your character. The story, characters, and dungeons are all interesting. Best of all, the game is FUN! And no in app purchases! Easily worth the money if you are looking for a great RPG on iOS.

For fans of the old Apple][ Ultima games, this is a treat. Huge, fun, funny and great support from its developer. I can't recommend it highly enough. Six stars if I could.

Lowerlander is a love letter to the old days of Ultima. It has all the old quirks of old-school RPGs, but enough modern references to make any millennial chuckle to themselves. The only suggestion I could make is have an endgame randomized dungeon just for some extra replayability. However, the most recent update has caused the boot screen to be wayy too zoomed in, and for some reason the game has frame rate issues on a 5s when before the game had no frame rate issues at all. Besides that, I'd definitely recommend this to old-school RPG fans and newer RPG fans alike.

Great old school RPG that takes me back to my Ultimate II days on Apple II+. Funny with some really clever bits