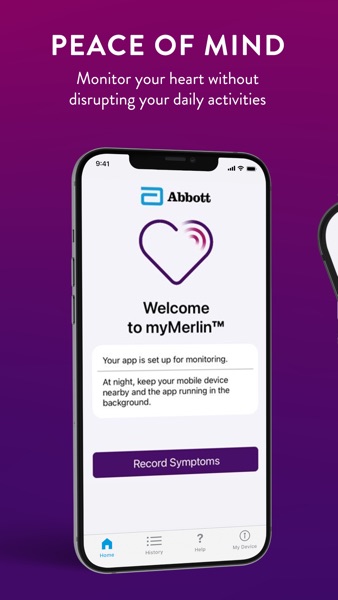 This update includes changes for improved usability and performance.

The Confirm Rx™ or Jot Dx™ Insertable Cardiac Monitor from Abbott is a slim profile device which continuously monitors your heart rhythm and automatically records events of interest as configured by your doctor. The myMerlin™ app securely and proactively transmits information per a schedule set by your doctor. The app’s intuitive user-friendly interface allows you to record symptomatic events, view past and upcoming transmissions and ensures that you stay connected with your doctor. This makes monitoring your heart’s rhythm easy, effective, and discreet.

This app will only function once paired with a Confirm Rx™ or Jot Dx™ Insertable Cardiac Monitor, an implantable device available via prescription only.

Unfortunately, the app has stopped working all together and won’t even open. (7/7/2022)

Not working since update. Won’t even load.

Why are the developers having such a hard time providing an update that actually functions? Its so frustrating not being able to report afib episodes. This is a pretty important resource for monitoring cardiac issues and reliability is paramount!

Stop saying you need more information it will not open. Your people appear very shallow

Hasn’t worked for two weeks can’t get out and try to refresh Jim T. I’m almost 80 this is crazy I just got rid of my flip cell

Had the loop inserted 4/11/22 for cardiac issues. Have had to uninstall/ reinstall the app several times a week since insertion just to get readings sent to my physician. My Apple Watch does a better job at monitoring me than this app. This developer should be ashamed for putting something on the market that obviously was not ready.

I looked at the reviews when the app stopped working. There are a lot of people who had this device implanted after a recommendation from their doctor. I see a nasty class action suit in the making here and fraud complaints to Medicare who probably paid for most of the loop devices and this faulty app. Better get your act together and fix the issues before it gets ugly.

This app is useless to me if it won’t open and send my data to my dr! They continue to call me and this app hasn’t worked since update!

Like everyone has been saying, A HEALTH APP IS POSE TO WORK BUT NOT THIS ONE!!! I do not want to be in their shoes when (not if) they get sued by their customers. I have A-Fib and need this app working ASAP, so fix it already. STOP TELLING PEOPLE TO EMAIL YOU, just fix your app already!!!

I updated about 4 days ago. Now I cannot open the app!! I deleted it from my Home Screen. Ow I can’t even download it from the cloud. Seriously frustrated as my doctors office is messaging me to open the app! AND I CANT!! 😡😡😡

I too find the app not opening. Just a flash and then back to my homepage

Please help. You are playing with my life! I called Monday am and your voice response system stated you are having major issues and recommended that I leave my phone number and you would call back. I have waited almost 3 days and no one has called me! As shown on your ratings, you know have more 1 stars rating than all of the others combined!, You have a serious issue.

I started having issues with the app and not able to get it to sync. Have callled customer service and have had no luck getting the app to open in my phone or sync to my device.

Ever since the latest update the app will not open at all. Please fix.

It causes more than a modicum of anxiety that the device installed in my chest is branded by the same outfit that trades as MyMerlin, a fully non-functional app. A one-star rating seems like excessive praise!

Hasn’t worked since the update and upon reading many, many other reviews I’ve come to the conclusion that you all have no idea what’s going on since that is the only issue you appear to be ignoring and not responding to. Have a blessed day

I own a development company and know I would be fired if I released something widely without enough testing and broke a life critical app like this. Thousands of dollars were spent on my device a couple of weeks ago and now it’s worthless until they fix it. You try to open the app and it crashes as soon as you try to open it, even after reboot. I do get an error message saying that the device is not able to send anything to the doctor. They put the device on me to contact my doctor in case of heart issues upon an emergency and prevent me from dying and now I’m unprotected. This is negligence.

Since the update a few days ago, the app won’t open and isn’t syncing with my loop recorder. This app is too important to have this glitch unresolved.