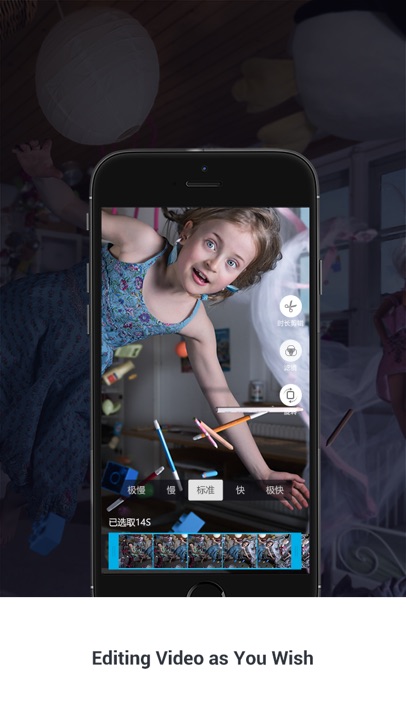 Make cinematic videos with your phone! Connect Rigiet app to Rigiet smartphone gimbal, and use all these tricks to film stunning videos:

Rig your smartphone and enjoy your filming!

I just recently got my Rigiet and downloaded the app. The app continues to freeze during pano, filming, linking through Bluetooth and the camera feature can’t balance indoor and outdoor lighting. This app needs a serious overhaul for this to work.

Sorry I bought this device!

App starts but freezes instantly. I guess you get what you pay for. I wish I would have spent the extra money for the GoPro gimbal.

The Cameron features cause the app to freeze. This is ABSOLUTE garbage. Fix it

To the Rigiet team: I’ve tried to talk to you guys via Twitter before coming here and do a review, but since you’re dead silent, here it goes. Please update the app to fix bugs caused by iOS 11. Big features as motion time lapse are now useless because the app is unstable and crashes every time you go for it. I know that you’re a hardware company, and the gimbal itself it’s pretty good but you promised us more with the help of software, so please, deliver it. And if I’m allowed to make a suggestion, the app should be able to save video settings instead of starting with 1080p at 60 FPS every time we open the app.

At this point I’m getting an error saying it is not compatible with iOS 11. It won’t even load and this download that says it fixes iOS 11 compatibility will not download. Houston, I think we have a problem.

This is ridiculous...Remove Logo / Watermark!

Rigiet fixed the image freezing in iOS 11, but now leaves a Rigiet logo in the lower right hand corner of every image and video when exported to the Camera Roll!!! It cannot be turned off!!! Rigiet. You must remove this logo immediately. This is unacceptable! Many of us waited month after month after month of delays and now that we have our gimbal, you put this on us. REMOVE IT IMMEDIATELY!!! One star.

Still glitchy with iOS 11. They added a watermark to video which is totally unacceptable.

Unbelievable! There is absolutely no way I can use this app. It puts their logo on my videos when I export them. Good grief. Massive delays in shipping and now this?

App now works on iOS 11. Hallelujah! Really impressed how the software and hardware work together to create a unique handheld gimbal experience. Looking forward to new features on future updates.

I am unable to connect with Bluetooth. Where is the support for this product?

Not much here. Wud be great if cud establish compatibility with a well rung-out app such as FilmicPro

I was one of the kick starter backers for this product. Really like the idea of an upstart handheld gimbal, for half the price of the competition. Unfortunately, and unsurprisingly I suppose, I got what I paid for. The hardware seems to work, but is only as useful as the app for me. Unfortunately the app constantly crashes, and when it doesn’t, it fails to save the recorded video more often than not. Combined those two, I’ve only managed to get a couple videos out of this combination. I’ve tried and failed to use it on both the iPhone 7 and iPhone X. Despite so-called ‘bug fix’ updates, this thing just flat doesn’t work.

Hi Read, Many of the bugs that people have left 1 star reviews have since been fixed and while I'm not going to say, everything is perfect, but it's really coming along. I hope that the company continues to perform updates. Enjoy!

I think many people will agree with me that this device is a headache more times then it is useful, I wish I would of never purchased this product. They had a great idea but money was the driving force behind the project and it’s apparent due to all the issues this device has, they cut way too many corners for financial gain and it shows in their product

Nice app! But need to update to work for IPhones XS Max!

I just dug the gimbal out of storage to give it another try. I was hoping some massive improvements have been made since I gave up on it the first time. Unfortunately, nothing seems to have changed. Given that updates and reviews are from a year or two years ago, it seems like both company and users have just given up. Personally, I am not a video or tech wiz. I gave this a try off of kickstarter, thinking it was a less expensive alternative. I guess you get what you pay for. I’ve never gotten satisfactory results. Neither the app or the gimbal is intuitive to use. So, I guess it will be going back into storage.

Their is no way to save the video files on the phone. They only exist within this app and the “save” function always fails and crashes. Pretty good hardware but if you can’t save the images what is the point. I got no value from the purchase of the hardware / software. Rip off.

Has a bunch of different functions, I don’t think it edits 🤔 I have not looked into it a lot... it works fine. Don’t know why there are so many one stars ⭐️. Still pretty good app.