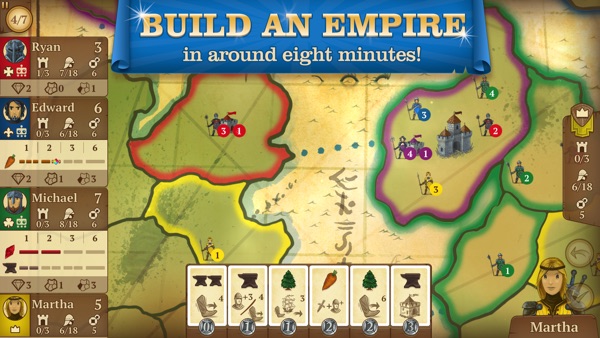 The official version of the board game – Eight-Minute Empire, by Ryan Laukat.

Build an empire in around eight minutes!

In Eight-Minute Empire, 2-5 players take turns selecting a card from the six displayed. This card gives the player a resource, and also has an action which the player takes immediately. Actions help players take over the map, but the resources are worth points at the end of the game, so players have to balance the two aspects. Players spread across the map in order to collect points at the end of the game by having majority control in regions and continents.

Eight-Minute Empire is the super-quick area control game requiring tough decisions. It’s easy to learn and perfect for when you only have a few minutes.

Could Acram just take over all digital board game design? The UI is insanely polished. I’ve played the game about a dozen times in 24 hours and I’m ready to take on higher AI difficulty. Edit: one thing I can’t stand about online multiplayer is that you can’t add AI players to a multiplayer game. Seems like this could be done and would make it easier for two people to play online multiplayer but not have to resort to a two player game.

While many civilization building games are marathons, this one is more like a 100 yard dash. You play cards to gain resources, which you have to balance, and choose actions from city building, raising troops, moving your troops, naval movement, destroying enemies, etc. the objective is to control regions of the board and preferably continents which you do by gaining a majority. You have a limited number of turns and curren$y to work with, and often the game is over before you know it, generally 10 minutes or so. These limitations make a quick play, but they also mean that each movie has to be thought about pretty carefully, because you don’t have time to waste. Well done!

I like civilization games but my schedule doesn’t allow for long gaming sessions. This game is perfect for people like me who like the genre but only have time for shorter games. I’m so glad to have stumbled upon this one! This is very well designed and user friendly. The rule book is a fast and clear read, and between that and a tutorial game you’re good to go. The AI seems balanced to me and I’m enjoying playing against it. Even though the games are brief the strategy is deep enough to keep it interesting without being overbearing. The perfect balance for a sort-of casual gamer like me. I’m glad the game board allows for easy zooming, because even on a large phone the map and icons are small. But the zoom function here is well done and very helpful for people like me who wear glasses. I find the pricing fair for a game of this quality. I’m glad there are good developers like this one and am happy to support their monetization model. Thank you, developers!

This is easily in my top 3 favorite games. Only issue I have it that it crashes between games.

Are you guys seriously pushing out an update when you have a sale so you can put the 'Sale' banner on your icons? Because that's what it looks like.

No intelligence at all. Wasting time.

This a fine, faithful adaptation of a very good board. I would easily add another two stars to my review when the following issues are addressed. Most importantly there are no time limits in an asynchronous game. This means when a player abandons a game, the game goes into limbo. I have two such games hanging as I write this post. Secondly, there does not appear to be a way to set a specific numbers of players in a multi-player game. So if I want to create a three player game, I have to be constantly watching the game lobby to start the game when the desired number of players join. I’m certain the developers will address this in a forthcoming update and I will happily revise the game’s rating at that time.

It's a well done little conquest game done with cards. It's limited but there's real skill involved in winning which I like. It's also quick, for those times you want a lighter games.

I’ve only played a few times but this seems like a great game. 8 minutes is a bit aggressive but each game is definitely short. Looking forward to playing multiplayer.

I have all the board games. This game is awesome I especially like the multiplayer. Little discombobulated about paying $5 for mountains which has negligible general effect on the game but just consider it a helping fund the developers for making an iOS version.

The game is really fun and well done. I just wish it didn't drain my battery so much. It is such a problem that I can't play as much as I'd like.

Fun game but in multiplayer none of us get any turn notifications (asynchronous games) and you don't get any indication something was added to the room message board. Not showstoppers but definitely irritants to an otherwise fun experience.

This game is intuitive and fun, but I’m afraid it’s not really worth the price of admission. I’m a primarily single player gamer and enjoy games that are still fun offline. Here, $5 gets you two maps. Everything else, including more maps or options cost additional money. I feel like I paid $5 for a demo version and not a full game.

I purchased game and Mountains expansion and everything went fine but then when I tried to purchase one of the maps it took my money, confirmed the purchase, but then said it was invalid and did not make the map available. Press on app support and there is no clear way to reach them. Game is good but how do you reach app support to report a problem??? When there are problems reaching app support I cannot give it a 4 or 5 star rating. Game was fixed and I gave it 5 stars but after recent update it immediately crashes to desktop on my iPAD with 500mb free space running IOS 10.3.3 each time I hit play. Still hard to contact support when you hit app support. The app is again 5 stars. The game is a lot of fun. And I must say that their support response to problems has been quick and efficient. They seem genuinely concerned with producing the best product possible and you cannot ask for more

This is a fun, quick game. Make sure to turn off the high speed frames per second, it absolutely eats battery and I cannot see a difference. Text is usually too tiny, especially on my SE. Some of the button placement could be more convenient, and stronger indicators for when your movement is complete would be nice. E.g. Move the end turn button to the upper right where it's easier to press, and next to the indicator for remaining moves (which I didn't even notice for a while). Also make it bigger, why are the buttons so tiny? In general it seems like there is dead space on screen so I wish it could be used more efficiently. I'd have to think about how to make that happen though.

Fun game with nice UI. Easy to learn with enough depth to keep you interested. The multiplayer is currently a bit rough. Had a game with a time limit that never advanced when a player timed out. Players can start an async game and disappear, never starting the game. You need to open a tab to see chat. Hopefully these will be resolved in future updates.

Whenever I run this app my phones battery seems to drain even faster. The app itself has a great user interface and works great. The in app purchases are disappointing. For a $5 app I was hoping I wouldn't have to buy more aspects of the game. The game plus in app purchases comes to $17 which is too much for a game like this. For $17 you can get Agricola, Surburbia and other better games for less.

This trivial little game is definitely not worth the $. Little replay ability without shelling over additional $ for more maps that add little, if anything, to the gameplay. The game is really simplistic, and is easy to beat once you get the hang of the game and the AI player behavior. This is a game whose best feature is the title - it ends there. Wait for Through the Ages - that's a real game, not this pseudo-risk wannabe

The game is solid, but the rules are somewhat lacking. I couldn't find what triggered the end of the game. The additional maps are also a bit expensive at $1.99 a piece. These really should be clustered as a map pack for a lower price. While I am thoroughly enjoying the game, I don't see any reason to expand upon the game at the prices currently available. I shall continue to enjoy the base game pack.