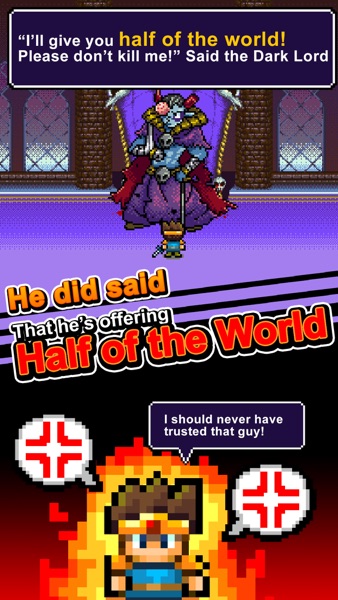 “I’ll give you half of the world! Please don’t kill me!” So the Devil Lord said.
Well, obviously, the Devil Lord is the last person you should trust…

“So, you’ve come.” Said the Devil Lord, “Now I’m going to destroy you with my own hands!”

After a few seconds, the Brave had won the duel with his overwhelming power!
However, right before he finished off the Devil Lord, a secret deal was made…

Half a year had past since the duel…

There are no signs of monsters reducing in the world, there are even more sightings than before!

Obviously something had gone wrong. The Brave decided to head out and confront the Devil Lord once again…!

– In order to claim half of the world, you must confront the Devil Lord once more! He is hiding on the top of the Devil Lord Castle, so let’s start climbing!

– Gather companions around the world! Overwhelm the Devil Lord Castle with all kinds of power!

– Ascensions will greatly increase you and your companion’s power! Use ascensions to gain the upper ground against powerful enemies!

– Summons will give you an extra edge during battle! Though they may only last for a short while, their powers sure are overwhelming!

Thanks for asking me to rate I really like this game and now I’m almost playing for about 4 hours this game is a really good game for me!

So I bought the ad free in-app purchase but still get those pesky banners at the bottom. What’s more the banners COVER UP THE MENU at the bottom so I can’t play the game at all. $2.99 wasted.

Game gives you so many rewards you experience a constant orgasm the whole time.

This game is fun, but with it taking forever to earn money, you get stuck on the same level unless you watch a video for cash

The game's premise is similar to a few other games, but the thing is- there are too many ads. There are pop up 5 second video ads, bottom banner ads, and ads which appear in the menu. They also pop up without warning and when the game launches. Unhappiness (depression) but it's somewhat enjoyable, albeit there are better versions of this out there.

The level up are exponentially growing and it makes the hero useless to begin with. Friends are so powerful but useless until later the game.

It asked for a review after 3 minutes

Please try to fix the power balance between the different fellows since the warrior is so much more powerful later on in the game since it gains power so fast so please try to make it so that we can progress through the characters instead of being forced to grind to level up the warrior just to get through one floor.