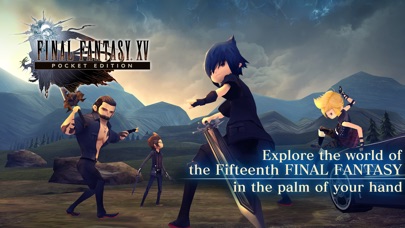 Fixed problem with no sound on iOS 15 or later.

FINAL FANTASY XV is now playable on your smartphone!

“Explore the world of FINAL FANTASY XV
with a cast of cute and cool characters! ”

Tap to move, tap to talk, and tap to fight
Easy for anyone to pick up and play!

– Story –
The Tale of the Chosen King, Savior to the Star.

After years of fighting, the nations of Lucis and Niflheim at last agree to an armistice.

As a symbol of this promised peace, Noctis, crown prince of Lucis, is to wed the Lady Lunafreya of Tenebrae.

The prince sets forth for his wedding on the eve of the signing ceremony, sent off by his father, King Regis.
Unbeknownst to Noctis, however, the journey ahead is fraught with perils…

Thank you so much for fixing the sound 💙 it was a huge problem for me, love the game, hated that it had no sound. Thank you for the fix!

Final Fantasy 15 Pocket Edition is now updated to work on newer iOS versions including 15. The game was showcased years ago as an Apple exclusive before being ported to other systems. Fantastic game!

I have had this downloaded for years right… since my iPhone 7 Plus. Re-downloaded when I got my 13 Pro Max. No sound. Today I’m notified that there was a sound fix for iOS 15 and later! Finally! For the love of all things Holy, I can hear the game again! LOL JK NOPE. Still no sound.

I downloaded this game a while back but I am now just playing it and I am literally at the beginning of the game and I have no sound and I figured that something is wrong because in the settings menu there are settings to control sound and they are all set to the highest volume.I can’t enjoy a game with no sound. And I was considering purchasing more chapters but there is no sound and it keeps randomly closing. I don’t want to waste my money on this so I’m deleting this game.

No sound in game for years now, sent in a support ticket with no response. Never buying another Square game if they don’t support them with updates. I regret buying all the chapters for $20.

I am on Iphone 11, and when I play this game, the audio does. not. work. Ive changed everything, My silent mode is off, ive cleared the cache, uninstall and reinstalled, It doesnt work, 50% of this game is in its audio and a lot of us arent getting that 50%

This game has no sound. I’ve tried deleting and redownloading, restarting my iPad, etc. but nothing works.

I thought to my self. Hey why it not re-download this amazing app and play it again. Once I recovered my past file, there’s not sound anywhere, I deleted it and reinstalled it and check again it was the same outcome. That’s just one of the problems the other one is that it keeps crashing after a few minutes of gameplay. Please fix this, I’d hate to see such a great app go from best app to worse app.

The game’s good, but there’s no sound. My phone’s sound is on, and I even tried headphones, but I’m getting nothing. I have no idea why. Can someone tell me?

Game is completely muted, no my phone is not muted, and no my game is not muted in the settings the game just has no sound.

This game is really a great game and would get a five star rating…. Until I tried to get Square-Enix to fix the sound by reporting it to them. They couldn’t give me an estimate on how long it would take for them to fix the sound. I waited for at least 6 months and the sound still was an issue. I contacted them again and there is still an issue with the sound. So, for that, this game gets a single star. I honestly can say I am extremely disappointed with Square-Enix because I have always loved the Final Fantasy series and some other JRPGs that they made throughout my entire life. I still play my Super Nintendo RPGs that will always remain some of the greatest games of all time in my book!!

Great game but the sound doesn’t work and doesn’t seem like they ever gonna fix it coz it been a while now. And as you can see no respond. U til then it’s stay one star

I’m unsure why but every time I try to play this game there is no audio. I’ve deleted and redownloaded it 3 times and still no sound. Maybe it’s a bug with my phone. Rather frustrating situation.

Please fix the sound bug. There is no audio

I like the game but it crashes constantly. No way to save either. Progress resets every time. I made it through 2 chapters. It’s unplayable @ this point. The audio doesn’t work either. I have deleted and reinstalled. I have also tried multiple devices. I would love to see these bugs fixed although it’s been a year since an update so I don’t see that coming. shame.

game has no audio pls fix