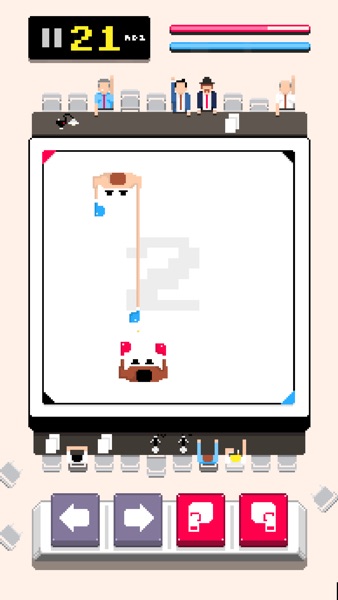 This app has been updated by Apple to display the AppleWatch app icon. Thanks for downloading my little game! Please note: You can use multiple fingers to tap to get up! So tap fast with as many as you can! Also pause menu can be found in top left of gameplay screen next to timer. This quick update just has some: • minor bug squashes • network optimizations • AI difficulty adjustments • some minor layout fixes Any questions or comments, feel free to reach out on Twitter @FrostyPopCorps or email hello@frostypop.com. Now, we fight!

* Please note: You can use multiple fingers to tap to get up! So tap fast with as many as you can! Also pause menu can be found in top left of gameplay screen next to timer. *

In a world you cannot understand, the ring is your salvation. You are, The Contender.

Get rocked in this 80s throwback to arcade boxing champions of yesteryears. The Contender is a less-is-more homage to classic 8-bit console (boxing) games that will, ahem, stretch your limits!

With deeply flawed control limitations, you will burst into tears of joy and passive rage as you walk into multiple left hand jabs with your stiff upper lip and stretch your arms across the ring to land your punches. And don’t forget to tap furiously to avoid being knocked out!

This is the perfect retro arcade game for when you have a few minutes and want something light and fun. After getting the hang of it, I win the bulk of the time, but it also counts your hits as a sort of high score, so you can always chase that too. Very well done, thank you developer for a good game that you monetized fairly.

The ai always win and their arms stretch! That’s the stupidest thing I’ve ever seen in my life this game is trash so stop making games

Playing a clone of a game for the Atari 2600 with ... improved(?) graphics, all for the measly price of constant ads. I get the appeal I suppose but good grief the shovelware of the 80s is coming back.

The game on the Atari wasn’t the best game, but still had fun playing it and seemed more balanced than this. This game tried to recreate that feeling, but failed miserably with almost no way to block hits if you try to throw a punch. Really the only way to win is spam punch your way to victory. This game really only brings back memories of the game, and that’s about it.

It’s very difficult to play with this buttons.

Bro it's almost impossible to beat the opponent! It's a time killer tho I just wish I had an actual chance at winning.

I've been playing this game for the past couple weeks and it's a really fun! If you are looking for a nostalgic and fun 8-bit game, this is a good choice! A few critiques I would like to throw out are: Custom fighters, different AI difficulty levels, more colors to the location and fighters, more arenas and more people in the crowds as you gain more wins. Overall I'm giving it 4 stars because although it's a pretty good game, I think it can be improved to be one amazing, 8-bit fighting game.

All you have to do is hold down the left punch button the whole time and the bot will walk right into it and it's impossible to lose, it's a great concept but needs a lot of improvements

This is a nice app to play. I like the way it keeps up with your record, the pixelated look, and the health regen in between each round. However, the cons outway the pros. The game is extremely difficult to play. You can't hit and move at the same time like actual boxers do. Also the buttons are way to small for my fingers and on occasions the game says I lost a match when I knocked down my opponent and won most rounds. So basically I was cheated out of a win. It could also go better with custom rings, fighters, and can challenge people online for titles and stuff. And it would be nice if the AI opponent changed so often and they all had background info about them like their records. Lastly, the opening of the app makes me think there's going to be some sort of story mode but let's me down when there isn't.

We would like a story mode or PVP mode, along with a variety of characters with different stats.

I wish I could move and punch at the same time.

Awesome game that I've seen in a while

Addictive game can't put it down!

This game is perfect. 👍

I was able to learn to play with one hand XD