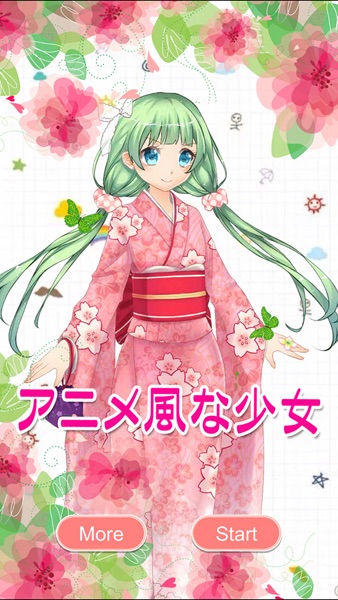 This app has been updated by Apple to display the AppleWatch app icon. Bug fixed.

Sweet girl is going to play, but she doesn’t know how to dress up. Would you like to help her dress up together? Have fun!

How to play:
Player need to collect coins first, then you can go to the shop to buy your favorite clothes and accessories. After that you can dress up the doll! Remember you just need time to get more coins! It is all free!

Features:
Beautiful doll to dress up with;
Lots of combinations of clothes and accessories;
Save your works!
The saved image can be:
– emailed to your friends!
– shared on Facebook and Twitter!
– used as wallpaper or avatar!

I can't play it it's Japanese

Before I actually downloaded this game I was very excited until I realized that Every time I try to enter the game it just kicks me out. I really don't recommend this game.😡 DON'T GET THIS GAME😡😡😡😡😡 and every time I go onto the game all it says is snowflower for about five minutes and takes me back to my home screen and I've already tried like 1 billion times to get into the game!! And I really really really wanted to play this game😭😭😡😭😭😡😡😡😡😭😭😭😭😭😭😭😡But sadly it doesn't work no matter what I do😭😭😡😭😡😡😡😡😡😡😭😭😭😭😭😡😡😡😡

First of all when your done with a add in 10 seconds a another one like come on give adds like one minute or three minute make it shorter! >:(

It looks English but NO U PUT IT IN JAPANESE! FIX IT

Every time I opened the app it froze for about a minute.I turned it on a couple of times and it did the same thing over and over again!😡😡😡😡😡😡😡😡😡😡😡😡😡😡

I thought this was supposed to be English 😂

I’d like it if it was in the language I’m best at: ENGLISH!

First of all this game has about 1 million ads, you get on ad, pick a clothing ad, and if you read JAPANESE, then you still would get blocked by ads. YOU CANT DO ANYTHING!

So, this whole entire game is in Japanese. I can’t understand a single word written in the app. If there was an option to change the language that’d be great.

This app is HORRIBLE! First off, I don’t understand it. It’s in Japanese. Second of all, it says snow flower for like five minutes and takes me back to my home page. This app also has WAAAAAAYYYYY to many ads. You log on. Ad. You finally get on. Ad. You pick a hair style. Ad and so on a so forth.

I can speak both Japanese and English, but because of the font I couldn't understand it. Please change the font!

Can't really read it but it's still a great app I'm memorizing the buttons lol!😊GREAT APP