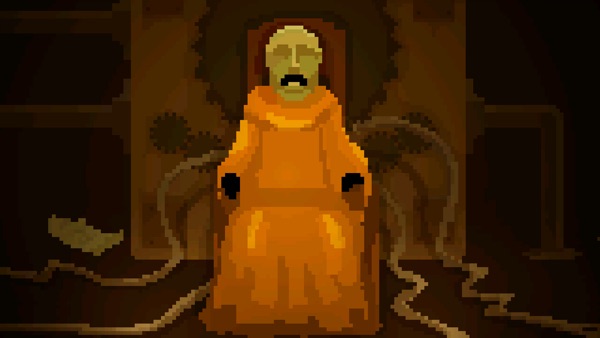 This app has been updated by Apple to display the AppleWatch app icon. - Added new languages: Italian, French, and German. - Fixed a problem on a scene of Episode 8 appearing in some screen sizes. - Fixed various problems with the In-App Purchase system. - Redesigned In-App Purchase screen.

In Season 2 of the award-winning hit The Last Door, delve further into the madness of the Veil as Dr. John Wakefield, psychiatrist to Season 1’s protagonist Jeremiah Devitt. Setting out in search of his client who has mysteriously vanished, Wakefield is soon drawn into the haunting web of forbidden knowledge, madness, and a deeper conspiracy hiding it all. As his search takes him beyond England, will he find his missing client? Or will he merely find that he, too, is about to become lost in the search for the Last Door?

* Sequel to the award-winning point-and-click Victorian era horror adventure, The Last Door
* Four episodes and exclusive extras and bonus content in one limited-edition set
* Guide Dr. Wakefield through new locations, characters, scenes, and puzzles in a new compelling mystery
* Search for and uncover forbidden knowledge that may drive you mad in a game inspired by the works of H.P. Lovecraft and Edgar Allan Poe

This game fixes all the issues I had with the first game. I found the story more engaging too. The game is longer. The story is told through scenes and conversations instead of having to read notes. You can see all items you can interact with by touching the screen with two fingers instead of having to probe the entire screen. I do wish the ending had explanation though.

I love this game!

I have the lever to the machine in episode 2 but it just won’t work, L game don’t buy you can’t even beat it

I am totally confused. I have the lever from the basement but I can’t attach it to the machine in the attic. Is there something I need to do in order to attach the lever? I’m unable to talk with the other characters about the machine. Help!!!!!

Love this game! I’ll admit though, some of the puzzles drive me crazy sometimes. Though I do have a complaint: after the app loads, if you go to the episodes through the main menu the screen usually remains black. You can still interact with everything but it’s a pain when you’re trying to restart the episodes to play again. Also, the achievements don’t remain after you’ve obtained them. If the app closes everything is reset.

Loved the first one (5-stars), so had high hopes for this one. Deeply disappointed that the sound and music files don’t play. Just silence. It seems the developers may not have kept the game up to date with recent iOS releases? The support site has no new entries in the last two years. I would pay money to buy this game if the sound worked.

Like the episode 1 so purchased the rest of the episodes. Ran into an issue with the game recently where it would give just a black screen and no response. Game forums spoke about having to uninstall and reinstall the game for it to work so went ahead and did it. Now the issue seems to be fixed, the game is asking me to repurchase the rest of the episodes even though I already paid for them. Emailed the developers about a week ago, but doesn’t look like they bother to respond or fix this issue.

I purchased the game 3 days ago for $3.99. The game stopped working in Episode 3 on my mini-IPad. I deleted the game and downloaded it again from the App Store where it is under the purchased category. But when I went to continue the game, it is not recognizing that I already purchased it. It is asking to unlock the game for $3.99. Please advise.

I purchased the rest of the season and the unlock feature is not working. It is shame, as the game is amazing! I see that the last update was over a year ago and they had tried fixing this issue before. Hopefully there will be another update soon, as it really ruins the whole experience.

Encountered a game halting problem in which I can’t put the lever on the sound machine in the attic even though that’s the part that is needed which is really disappointing because I loved the first one and was really enjoying this until that happened, I could just skip to the next episode but I would have really rather been able to play it through as intended

This is a great game until you get to a certain spot where you need to use a lever with a device. There is a bug in the game that prevents you from using the objects together which stops gameplay in its tracks. You cannot move forward in the game. Very disappointed I paid for this game and this major bug hasn’t been resolved.

The game is as beautiful as the first. I love the versatility of the maps within each episode. If I have to point out one major flaw is the transitions between scenes. It is very jarring and abrupt. Other than that disappointing aspect the game is fantastic.

I'm on episode 2 and it keeps crashing! Please fix!😭

After the first part, I'm one third of the way in and it asked me to pay to unlock the rest but I bought it already! Then says it will restore since I bought it, but it won't unlock. Kill the app, try again and nothing. Now it is just freezing on a black screen. I will be seeking my money back. What a shame.

I rated this game from an in-game prompt and now the game/episodes section loads to a black screen. So far-I loved this game, enough that I only knocked off two stars for a seemingly anomalous glitch (could not find anything online or on their forums about it).

I was so excited when I saw this I've been waiting for more then a year, but what happens when I open it? It freezes when I try to play it. Then I get past the screan(reloaded the game) and it happens AGAIN! This time though reloading won't work. I would recommend publishing a game that's actually playable.

I've played all of the first season and it's great. The Last Door is one of my favorite series. However, I cannot get this app to work and the game consistently freezes. If I get it to go past one spot after multiple tries, it freezes at the next step and after two days I haven't gotten past the intro. As such, I feel that I can only give this one star. I am very disappointed that this app simply doesn't work.

Whenever I start the first chapter it just sits on a black screen that says they are coming. Is this a bug or am I just missing something? When I exit to menu it shows the rest of the room, but nothing else I've tried has made a difference. Also, big fan of the first season

Opening screen of the first episode gets stuck. When I went back to Main Menu, it shows briefly the image that was supposed to be there, but without going back to the menu the screen stays black with the words "they are coming". I'm a huge fan of the game series so I'm sure this installment will be excellent once I can actually play!

"They are coming" never changes after repeated tapping. After rebooting...freezes at Street scene with no controls just a box with down arrow.