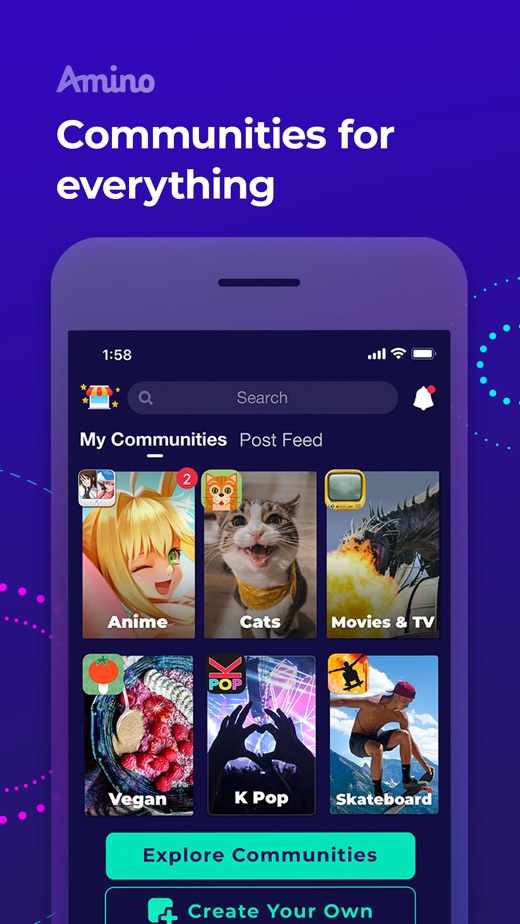 Explore your interests, tell your story and find your people on Amino.
Start by exploring a new type of video with Amino Live to share the best parts of your interests with millions. Then, chat and connect with fans like you in Communities around all your passions.
Our latest update empowers you to create videos, Communities, posts, and quizzes to represent your interests to the world, the fandom, or just your favorite group of friends.
Key Features:
– Watch Live streams, videos, and (read) blogs
Kick back and enjoy videos and blogs covering all interests, from Art and Anime to K-Pop and Video Games, created by passionate fans like you.
– EXPLORE Communities for whatever you’re into
Amino Communities are safe spaces that bustle with thousands of friendly super fans. Join to discover in-depth Live streams, long form posts, reviews, analysis, fan art, polls, quizzes, recommendations, photos, journeys, commentary, fan fiction, cosplay, and anything else you can imagine.
– CHAT with people like you around the world
Join global and community chats that are completely anonymous and full of new friends. Discuss Indie Games, DIY Projects, and Nightcore, or get even more involved by taking part in Roleplay skits and Singing Competitions! Use thousands of handmade stickers (like tofu dog) to show people exactly how you’re feeling, then make new friends with the Internet folk you click with (because who doesn’t like tofu dog?!).
– CREATE your own Live streams, blogs, polls, quizzes, and more
– CUSTOMIZE your profile
Check out our digital store featuring handcrafted stickers, saucy chat bubbles, and beautiful profile frames to stand out from the crowd in Communities and chats. Go on, try on a profile frame. That one looks great on you.
– MAKE new friends
We believe in you!

I’m not getting notifications and it’s been a whole week of me thinking people aren’t responding to me!

ive been using Amino for 5 years already,i've dealt some pedo's asking for pictures of my face.and i atleast dealed with atleast 10 people who tried to ask for pictures like faces.Amino is such a great app y'know? easier friends..friendly communities and so much more!

I met so many accepting people of gays, furries, people with autism, literally the best app I have used it for like 5 years and I never regretted it, it’s literally life changing

In my close to 5 years worth of using amino i’ve had many good and bad time. Recently however it’s just plummeted with the servers always being screwy and many many people getting banned for no reason. One example of that is myself as i admit i have had many accounts before that were banned due to less then proper Pfp’s or the such and often i would get warnings before then to tell me to fix mt act or face the consequences. But recently i had a perfectly fine account with no warnings or strikes get banned and i had been talking about a different app called Project Z. I then learned that alot of people were getting banned due to talking about that other app was blacklisted which made sense with how i was banned. I have since then ceased using amino and thusly lost the ability to talk to can communicate with many friends i have made over the years there only really keeping one or two due to them using other social media outlets like discord or Project Z. Im not here complaining about being banned or demanding my account resorted cause I don’t care i just hope that those there at amino know that by banning talk of other apps or banning users without warnings will just cause your app to fall even more until it’s over shadowed by most everything else

Good app that allows you to mingle with fellow people that share the same interest. It’s nice that each page can have it’s own rules so it’s for the most part run by fans for fans. They’ve changed the layout throughout the time of my of using it and I’d say it’s for the better; less clutter. My couple gripes about the app is that it’s almost constantly asking you to rate it even if you’ve already done so. There’s also ads that more than less get in the ways causing me to misclick on them. ALSO I don’t know if this is a major issue, but updates sometimes don’t appear on the update page in the App Store, so the only way I get notified sometimes is on the app.

I’m actually amazed how this app is still active. I first downloaded it around 4-5 years ago but the app hasn’t changed much from the original version. I hope it still works like it does so I can find new people to game with.

I’ve used this app for years now, and never has this been an issue up until now. The app crashes every time I open it, so that it’s effectively rendered useless. A waste of space. When I delete and redownload it, it works for a minute, but as soon as I click on anything inside a community it crashes yet again and the problem begins all over again. It’s really irritating. I’m only in one community and it’s not an extremely popular community, but I still want to be present. I don’t know what to do to get this app to work again, as it did years prior. Moreover, the app has been rendered ugly with pop-up ads being the norm and there always being an ad up in the corner somewhere. There was once an option to turn off ads, but I don’t think it exists anymore. If you’re thinking of using this app, don’t. It’s no fun.

The app was giving me a problem with something, so I updated and now it won’t open. This has completely cut me off from a blog draft I had stored on the app. I need a new iPad as my IOS is out of date, but if there’s anyway to fix this problem then I’d be interested in that solution.

Way to much grooming has taken place on this god forsaken app, please be careful, the moderators won’t help you enough, much love

As of your latest updates (April 2022) this app now immediately crashes as soon as I tap onto it. I have been locked out of my community for weeks, and unable to talk to any of my friends who are not on discord. I normally ignore the pop ups asking me to update because every update just brings more bugs and glitches. Only when it got to the point where I was having serious issues with messages not sending or double sending did I finally give in and update, but now I highly regret doing so because now I cannot get in at all. Please fix.

I’ve been using amino for years now, it’s a fine app. I just wanted to suggest that you guys start advertising it again so people will start using it again. Maybe and a new thing that’ll draw people in or something. Because now amino is more nostalgic than a thing that I use use now. Also stop giving adds to people with amino+ and or just stop putting ads.

I haven’t been in a chat room since aol. Old concept but oh so great

I’ve been on amino for years, and there are a lot of problems. I’ve been banned in multiple communities within a month simply because of a lie one person started, and I don’t know how to get this person removed from amino altogether. But to my main problem. I’ve been trying to post my own community for months. What happens when I try to submit it? It tells me I need to be active more asking with my staff, when we spend 15-30 minutes on the community daily. I think this rule is idiotic because it heavily ruins the chance to get your own community. So I’ve made ANOTHER one and now I’m waiting to be able to submit, sure to see the same problem. I think the 14 day of age for the community is over rated and useless. At the least it should be 7 days even though it shouldn’t even be that if any. I’d would be ever so helpful is this was edited and the 10 minutes a day should be fixed as we’ve all been spending more than that. It shouldn’t even be there!