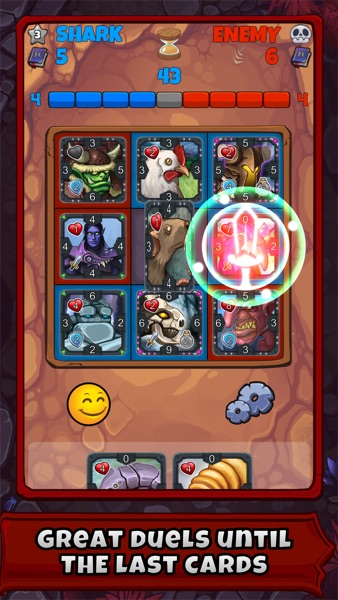 Epic PVP battles, hundreds of unique creatures and tactical intelligence await you in this amazing collectible card game. Summon your powerful cards in a 3×3 board, pay attention to the strength and skills of all creatures and try to destroy your opponent’s moves.

– Revolutionary gameplay with very simple rules but with endless tactics possibilities.
– Challenge other players from around the world in exciting duels.
– Collect more than 180 basic creatures divided into common, rare and epic.
– Sacrifice your cards to gain resources or evolve them for a total of over 500 unique creatures.
– Daily prizes and dozens of goals to unlock.
– Improve your deck to reach the top.
– A game constantly updating with new features and new cards to collect.
– Easy and immediate interface.

Download it for free now and start your battle!

The game is great, but no longer lets you buy gems and I can’t get ahold of developers to see what the issue is. I will give 5 stars once the issue is fixed.

Wouldn’t it be cool if Square Enid bought this game out and took their ball back and ran with it? This game gives you a vision of how something can be expanded on and tweaked just right Don’t stop guys, keep making it better and bigger! The possibilities for a MMO version notwithstanding, the game here could benefit from the expansion and flushing out of card abilities and flavor. Also new cards please!!!

Boring, no single player option really, you have to rank up to unlock single player level. Starting cards are garbage. Game is riddled with typos and bad translated text.

I like this take on a simple but fun game. The health mechanics draws the game out from being too quick a match and increases the strategy. Match making is fast, too.

the new UI and features are cool, but the language is like italian or something and i can’t change it

The linking accounts won't work no matter how many times I've tried, please fix this issue

Great fun game and an awesome support team that will contact you if there are game issues. Plus, the developers continue to add new card abilities to keep the game fresh.

Fast responsive and friendly! Helped me with an account issue I had :) game is neat too!

This game is so fun. I'm addicted to it. Great gameplay that stimulate your brain. Recommended!

amazing game with many monsters in this card game,controls are good,fun game!

I like the app itself. Nice UI and so much stuffs on it. Everything is fine though except the online battle I most of my games are disconnected. I love the designs of cards, boost and etc. Kinda animated thing which is a plus for me. I like it. I recommend this game for those who's looking into some kind of this game. Kudos to the developers! Amazing game!

I'm not very great a card battlers, but this was a fun entry point for me. Great graphics, fun gameplay, and a solid soundtrack make this an easy recommendation. My only wish is that there was an interactive tutorial at the beginning to help new players. Keep up the great work!

That is cool game. Awesome and interesting.

Awesome card game. I love the idea and mechanics. And I really like the co-op play. It looks simple because of cute graphics but it makes you think about the strategy.

Such a cool card battle game. Graphics are high quality, which is really important to me. Love the theme and just the whole idea of game. Card characters are pretty interesting. Fun, challenging, exciting... Love this game.

this game is very nice and very addicting. thanks

This is one of the best looking card games I've tried. And it plays like a pro, too. Bright and colorful interface and silky smoooth animation, everything from the creatures from the cards to the environment just comes alive. This is a game everyone should try! Really good!!