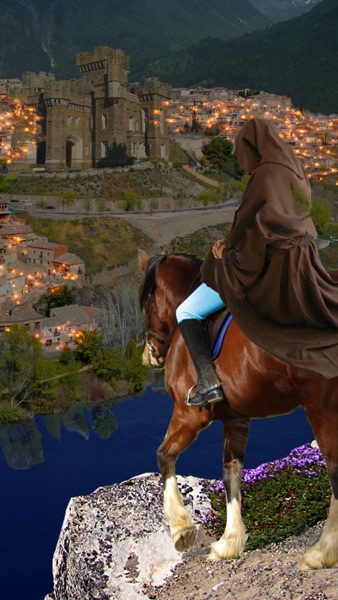 Unite the kingdom to take back your capital city! You’ll need dragons, elves, and perhaps even demons to avenge your parents’ murder in this fantasy epic! In “The Lost Heir 2,” you’ll continue as the prince or princess of Daria displaced from your palace after the murder of your parents. Face betrayal, seek romance, battle enemies in war, and navigate the intrigues of court. The fate of the kingdom of Daria is in your hands.

“The Lost Heir 2” is a 250,000-word interactive fantasy novel by Mike Walter—the second of a trilogy—where your choices control the story. The game is entirely text-based—without graphics or sound effects—and fueled by the vast, unstoppable power of your imagination.

• Play as female or male, gay, straight, or asexual.
• Meet elves, dwarves, gnomes, and more as you explore the furthest reaches of the land.
• Learn amazing new abilities from legendary teachers and search for powerful artifacts to help you on your way.
• March into heated battle and lead your army to victory!
• Fly a dragon, raise an undead army, discover alchemy, summon new demons and more!

Can play many times in many ways.

SPOILERS... This entire chapter is based around an army-management minigame, building up to a battle at the end. Now here’s the big spoiler. WINNING OR LOSING MAKES NO DIFFERENCE. If you win, you will get cheated of your victory by your plot-armored nemesis. If you lose, you will survive due to your own plot armor. Whatever happens, your friends will be all right and your kingdom will be overrun by demons. In fact, losing may be BETTER. You get to screw up the minigame as badly as you like, and you’ll get a brainwashed friend back. In order to win, you have to kill them. If you lose, the only named NPC who dies is a gruff general who barely appears in The Lost Heir 3 anyway. The only real reason to win is bragging rights. I assume the author responded to feedback that failing TLH1’s boss battle had far too harsh drawbacks by lowering the consequences for losing, but having an arguably NEGATIVE outcome for winning is bewildering. END SPOILERS I recommend just focusing on building up your character for TLH3, because that’s where the stat checks become truly brutal. Again, I recommend physical classes because, if you focused on Magic alone, getting a good ending will be much harder there.

One of the most AMAZING games I have played! I can’t Evan describe what it is like to lose yourself in this beautifully told story! I don’t wright reviews that much but WOW! This hits home! With so many classes o choose from! AH! Amazing just down right AZMAZING!

This game mixed in the perfect sequel to the first in this saga and finished with a satisfying conclusion and was overall happy with the final outcome. This was a really well written and devolved story arch and makes you genuinely care for the characters!!

I was super excited to see, after playing the first game years ago, that its two sequels were out. This is a really well done series where your choices really matter and affect your relationships and the outcome of the story. This one is quite different from the first game, as in this game you're much more focused on running and maintaining your kingdom and army, so there's much less focus on talking with your companions and romance. Personally I like both in their own right. It's a cool world full of magic and monsters that's very well constructed. It's a great length as well. The one complaint I have is that I wish there were save points or checkpoints where you can go back and change your choices mid game- instead of having to reset your whole game like you have to do now if you choose a wrong option or one you didn't like the outcome of. Otherwise, it's great!

A superb sequel that matches the masterpiece of the original. The plethora of hidden paths is enormous. The addition of many new and hard to obtain classes makes the game even more versatile. The only drawback to this game is the companions from the original game feel a bit lifeless compared to their vivid personalities in the first, this problem also reappears in the third game. But overall a great game that I recommend highly.

Check it out. Rock on lucid.

What a phenomenal series! I loved every minute it. The characters had great depth and backstories, the dialogue flowed smoothly, and the options were well thought out. The amount of different classes and secrets you can find created a TON of replay value I had seven different characters with different experiences each time. Very well done!

Had a fantastic time. Can't wait till the next one!

This is an amazing story of where you basically choose you own faith. Where's the next one!!!????!!

This is a fantastic game, worth your investment many times over. I've played and enjoyed almost all CoG titles, and in my opinion the Lost Heir series is the best of them all. I've played through Lost Heir 1 and 2 more than 20 times each, and I still have more paths to explore! There are just tons of ways to play this adventure. I just finished playing as a Priest who became not only King, but also Archbishop of his faith. You can level up the same Class until you reach a position of major influence like this, or you can mix and match Classes to see if you can unlock a Prestige Class. There are plenty of choices: Knight, Guard, Thug, Bard, Thief, Asassin, Wizard, Druid, Sage, Ranger, Monk, and more - any of which can be played differently depending on whether you choose to be Good, Evil or Neutral; which Abilities you increase; which Skills you learn; which sexual orientation you choose; which friends and relationships you cultivate ; and what choices you make along the way. Learning to master demons is optional each time you play, and there are several powerful and interesting magical artifacts and legendary mounts for you to discover. This adventure in particular is very challenging and fun, which makes attaining your goals extremely satisfying. The writing is superb - the story draws you in and keeps you there. This is hands down the best Epic Fantasy game I've found for a mobile device. I can't wait for Lost Heir 3! I could go on and on describing everything I love about this game but I'd be doing you a disservice - you need to download this game now and experience it for yourself; I *know* you will enjoy it!

Compared to the first it felt a bit short. Though, I LOVE the fact Necromancy was added to this! Not enough Games, MMO's and TBs have it as an option; so I can't be harsh on it for that. Just wish it could do a little more than just the horse and companion (still really amazing). That is necromancy though, I hope it would have developed further such as creating an addition or replacing your allies army's with undead legions if they decide to give you a problem. Haha, or maybe a prestige class for necromancer to achieve Lichdom. A necromancer at heart can hope can't he? Though as a scripter of interactive fiction I can vouch as to the fact the more options added the harder and longer it takes to make the story/game. Haha, though I think this game has taken me away from that. I'd be willing to bet i'v put more hours than anyone else into it.

The main problem I have is that the stats relating to the army are not shown any where so you don't ever really have a good idea of what your action's consequences are. It is really difficult to do with out a pen and paper right besides you. But I like the feel of it, you are I control of an army and your personal stats don't matter as much. Besides that it is a well written game. Love these games in general. This is really only if you have already saved your character and you want to continue your adventure. Play the first game then definitely get this one

This game is a very well written story with choices that may seem to matter but in the end don't. For if you are hoping for a interactive story where you can impact it based on your decisions you will be disappointed. Especially at the end. This is a book with a clear predetermined end. Nothing you chose will change it. However it is a very intriguing story if you are into reading a normal book without having any impact on the plot.

This sequel is great for the company. I would say that it beats the previous game, giving a new variety and inner options. The option to play without loading a character is done incredibly well. The character creation is unique and different for this company. Wonderful game.

It's a good read, the only reason I'm giving 4/5 is because since I used my last save and maxed out magic, i was basically screwed doing a lot of other stuff because my stat was too low and there was no good way to raise them.

Game is fun but there are quite a few frustrating bugs, especially with skill checks. If they fix that game will be a 5/5.

I enjoyed the first installment of this series. This one is a disappointment. Less adventure, more numbers, impossible to beat. Quite frankly, this game was a failure. Tl;dr - If you aren't a Rocket Scientist then you won't be able to do this game correctly.