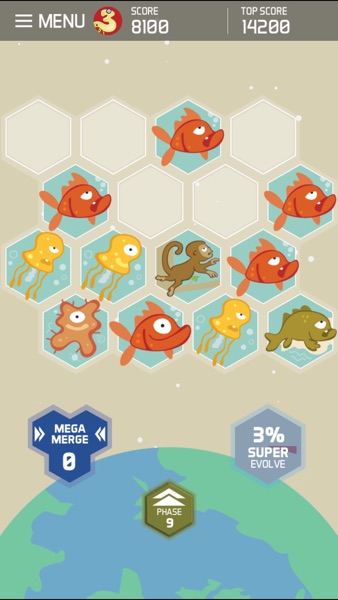 This app has been updated by Apple to display the AppleWatch app icon. Minor improvements

Develop a mutation fixation with 3volve – the super simple, addictive puzzle game for all ages!

Gameplay:
– Swipe to merge 2, 3 or 4 matching icon tiles. Combining 3 matching icons in one or more moves allows that icon to evolve to the next phase.
– If the board fills up and there are no more moves available, you will have the option to use a Mega Merge to combine all existing matches on the game board to free up space and keep the game alive. Mega Merges can be won or purchased.

How far can you 3VOLVE? Merge as many tiles as possible and climb the Leaderboard!

Time flies while playing this game!

No ads unless you want to see them. Great app for wasting a couple minutes

I hate games that ask for a rating. This is an amazing game. Fun and addictive but hate that it’s asking for a rating for a price. I took part because hell yeah...mega mergers but. No.

This game is fun and engaging and I love playing a few minutes a day. The art is cute and the puzzle is quickly learned but still tricky. Great for casual gamers and puzzlers alike.

Easy to play. Hard to put down.

It needs a little more added, maybe like more options for customization, but not bad

Glitchy issues seems to be resolved

I've been playing for so long. It's great!

This game is so addictive. Like so much much 😂. Don’t play it at work you WILL GET IN TRUBEL!!!!

I really like this game, but it is so hard I cannot even get almost half way complete the game without using up all of my mega merges, and even then I still lose. Why not instead of playing the game on a hexagonal grid, you play on a square grid. Also, instead of merging three icons in order to evolve to the next level, why not just merge two icons to evolve to the next level. If you made these changes, then I would give this game a five star rating.

Great little game, but advanced progress depend entirely on buying a "power up" ... if those were a little easier to obtain for free or you got a few more per purchase, it wouldn't be so bad... it is amusing and a definitely time waster though. Gaining the "power up" by in game mini-games may be a nice alternate option to buying by them all. (Unless you hit the 4 in a row roulette just right)

Time killer but a bit annoying when app kicks me out sometimes when got 4in a row!!! tht's not fair :(