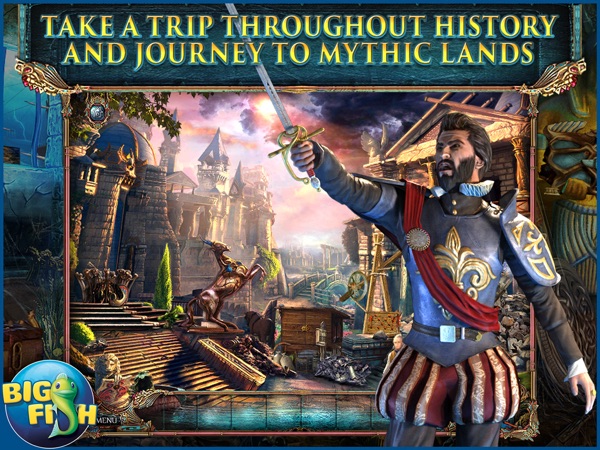 Unlock the complete adventure with a single purchase! No in-app purchases!

Sarah Pennington, member of the Secret Order of the Griffins, is stranded in the past with a broken time machine. Tasked with recovering dangerous artifacts from the Dragon Clan and saving the ancient Kingdom of Aeronheart, Sarah now needs find a way back home, but her enemies will stop at nothing to make sure she stays buried in the past forever!

• TAKE A TRIP THROUGHOUT HISTORY AND JOURNEY TO MYTHIC LANDS
Find the missing talismans for the Eagle, Jaguar, and Crocodile tribes to enlist their help. They may be the your only hope in getting back home where you belong!

• CAN YOU REPAIR THE ROYAL GRIFFIN AND RETURN TO YOUR OWN TIME?
Aid Flavius the Inventor and other historical figures to repair your broken time machine through fascinating hidden object scenes.

• LITTLE NUBI TO THE RESCUE!
Use your new friend’s special talents to crack elaborate puzzles and vibrant mini-games.

• DELVE INTO THE UNDERWORLD IN THE THRILLING BONUS CHAPTER
Face your greatest challenge ever and enjoy additional Collector’s Edition exclusives including collectible items, achievements, and more!

Sign up for our newsletter and never miss a new release or promotion again: http://bigfi.sh/iSplashNewsletter

Big Fish is the leading global marketplace to discover and enjoy casual games. You can enjoy our virtually endless selection of games anytime, anywhere — on your PC, Mac, mobile phone, or tablet. Learn more at bigfishgames.com!

I love this series and this game in particular. Definitely one of my favorites.

It has beautiful graphics ( as others have said), and Ido like the mahjong option for puzzles. What I really missed was a map. There were also some screen freezes. for those reasons it just got an ok.....

Travel the space-time continuum aboard the Royal Griffin. You get to meet DaVinci, Cortes and Cleopatra. You have a baby Anubis as a helper, and he gains different powers as the game progresses. You collect animal masks. This game was lengthy and had bonus gameplay, where you travel to Hades. The graphics were magnificent and colorful, the cut-scenes were exciting and enchanting, and you couldn't predict what was going to happen next. There was a journal, but it only listed objectives. Loading was instantaneous between locations, and there was a marked teleport map, if so customized. All inventory was labeled. The HO scenes were varied and interesting. There were a lot of puzzles and mini-games, but there was a lot of rotational stuff, which I don't love but forced myself to do, because it sharpens your mind! The gameplay was flawless. There were no rodents! I only deducted a star because a real diary would have been helpful and also because I felt that there wasn't enough variety in puzzles and games. Still and all, awesome game, Sunward. Thank you BigFish for bringing us blockbusters again! Please can we have a new Empress? Lynxie sends lots of ❤️💋😘 to Dracyy, KimT, Opinion, Sunshine Susie, Snooper and the rest of the Dream Team Elite! We absolutely have made a difference as to the caliber of the games we get now; BigFish has told me we are the best of the best so keep up the great reviewing!

The hint button is a real pain,it doesn't always Work. That can really turn you off.

Enjoyed this from beginning to end. Look forward to a sequel.

This game has it all. Great story, long enough to enjoy, great puzzles, good hint button, and much more. The Nubi character is a blast. He develops more skills as the game goes on. (He's a helper during gameplay when you need him) absolutely recommend this to fans who play these types of games by Bigfish

Friends & Followers, Vibrant background scenery, nice story line, enjoyed the collecting of Jaguar masks and chance to play Mahjong (or what the developers thought Mahjong was) once in awhile, but the "extras" included in the asking price were practically non-existent and the game, although quite well designed with an accurate periodic presentation of the various cultures represented throughout history, had dismal voice synchronization, poor character movement, glitches here & there and was in the long run not worth the sale price due to the overall short playing time, lack of available "extras" after the main game was played, and a bonus chapter that was in reality just like the main story: simply not that challenging or attention gripping. If it has not been noticed by now, Big Fish has been bought out by someone whose principal concern is only that of the accumulation of money: Gone for the most part are the days of "try it before you buy it", price differentiating for iPhone vs. iPad versions of a game, quality control, company ethics and that of being there for the customer. Prices have also skyrocketed, with now even the "sale or introductory price" being ridiculous in its asking. And there are many games from the past that the "new" Big Fish has simply just revamped into a HD version and re-released it. Such integrity, yes? The Legal Department at the newly owned Big Fish in addition, for those who are interested, has "subtly" slipped into their User Agreement Policy a sleazy change with regards to legal recourses allowed, along with monetary compensation filing limits for any legal precedings/actions taken against the company-It therefore is strongly recommended that one reads in its entirety Big Fish's new/adjusted User Agreement Policy and forwards within one month, as is demanded in the User Agreement Policy by Big Fish's Legal Department, a letter to Big Fish clearly stating that you do not desire, nor agree to under any circumstance, to be held accountable/bound to Big Fish's new/adjusted User Agreement Policy. In short, Kamen Rider no longer is willing to be associated, nor review, any product or service associated with the name of Big Fish. We will now concentrate on other companies out there such as ArtiMundo, Alaware, G5, etc. that are there for the customer, not solely for the money. We hope that you are valued public will do the same... Thank you for the continued support & following. ~All of us at Kamen Rider

A great sequel to the Original.

This game has a good story. I like the fact that it continues the story.

One of the better games I have played on big fish in a long time. I still miss wild tang that I play on the computer which the first time you start it you can play free until you stop. After that you pay with coins to finish the game. You can rent the game or use the coins and buy the game and they will send you a copy of the game on cd and you can down load the game on two or three boards that you own. For nothing but you do not have all these games that you have to buy that you never go back and play again.

I gave it 4 stars for effort. Not my cup of tea.

More than just your usual hidden objects! A step up. Fun. Kept me coming back.

I'd give a 5 star, but I been burned so many times that I hesitate to give a full thumbs up!

This game had great puzzles and hidden objects that allowed mahjong as an alternative. The only reason I gave four stars is I just didn't like as much as others. I wanted to give three stars but felt that was unfair, there really isn't anything more wrong than personal preference. Although I just could not see that it should warrant five stars. I did not have any technical issues what so ever.

Don't buy. Yes, it's a complete game but it still has ADS.

Really creative and fun! I'm so glad I gave it a chance. I think these types of games are the games of the future, dynamic and interactive while asking us to test our problem-solving skills. Great job to the developers :))

Well done. Good story and graphics. Puzzles were challenging. Hint button and map worked well--fast & accurate. Very nice length of game play. Cut scenes were not obnoxious & overdone. Well written story line so that you didn't have to constantly use hint button to figure out play. I rarely give 5 stars but this one deserves it