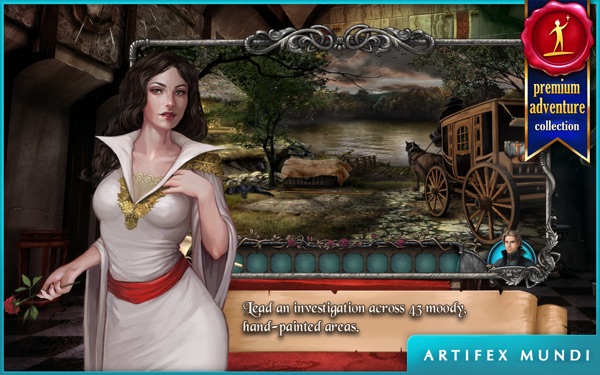 FANTASTIC HIDDEN OBJECT PUZZLE ADVENTURE GAME FROM THE CREATORS OF ENIGMATIS AND GRIM LEGENDS!
Vampire Legends: The True Story of Kisilova is an adventure game with elements of horror, based on the first documented case of vampirism!

18th century Europe: fifty years after a great plague had swept the land of the Habsburg dynasty, the subjects of the Emperor are in danger again.

A series of horrifying, unexplainable deaths occur in the remote Serbian town of Kisilova. Fearing that the plague may be striking again, the residents begin to flee their homes.

Summoned by the Prince of Württemberg himself, Imperial emissaries come to Kisilova to investigate the events and prevent further deaths.

The heroine and her companion have to lead an investigation, question the witnesses, explore every nook and cranny in the town and solve many puzzles.

Will they be able to uncover the secrets of the local dignitaries and discover the identity of the hooded stranger trying to thwart their plans?

The fate of Kisilova and the Empire lies in your hands!

Right off the bat the crossing the river did not work. Lots of talking and kind of boreing for me. Will not buy. Glad I could try it out first. I do like most of Artifex hsmrs not this one.

Color was great, dialgue was good. I actually used a hint or 2. One clue was really difficult to find. It was in Philips room!

Had fun! Not too easy, not too hard

This game was ok but too short and too easy. And I played in the expert mode. Oh well

I bought this game when it first came out and I had so many problems I just deleted it off my Mac. When they said they’d fixed the bugs I thought I’d try again, well they got some of them. The map doesn’t work all the time and the Hint button is KAPUT! Maybe you won’t have those problems. I would have given it a 3 or 4, it has a lot of dialogue. It is supposedly based on a true story, that’s fun. The best part is in the Extras, the pictures of the town and the little video. Too bad it didn’t work for me.

I enjoy all of Artifex Mundi games. This by far is my favorite because there is a intriguing story, great art work, great soundtrack, and I get to interact with the characters.

Got stuck a couple of times but think I wasn’t concentrating. Color beautifull. sped through some parts without enjoying dialogue.

A very good game!!!!! I love hidden object and the story was great!

The game was challenging and I like that, but there is still some minor bugs in the game near the end and that was disappointing. The graphics were good. I gave the game three stars because of this.

Lots of puzzles, which kept me preoccupied. I enjoyed the game. The storyline was somewhat predictable if you have watched a ton of vampire movies. However, the game was well done overall.

I like this game. It was a very fun play.

This really was a lot of fun and the graphics were great. I wish there had been more than just the two chapters. But that’s ok, now I’ll have to try another one. :)

Lots of fun puzzles, some are easy, some really make you think. and GREAT STORY LINE! Especially with the bonus features where you can learn more about the actual history related to the game. I Really enjoyed it and will be looking forward to playing more games from them!

Awesome graphics! It really engages you! Can’t wait to finish the game!

Very nice game. I enjoyed it thoroughly. It was too short. Needed more scenes and puzzles.

If you’re looking for some adventure to take you away from the doldrums of life, check this game out!

This Game was AMAZING!!!!! The Puzzles were hard but still Great Game

I was enjoying the game until it came to buying the In-App purchase, I paid the 4.99 and nothing happened. It’s a good game, I was enjoying the story also. I’ve contacted the developers about the problem, until then the rating will remain 3 stars. Update on the purchase, I tried one more time at upgrading my purchase. Below the “unlock” word were the words “all ready purchased”, I clicked on them and the game was immediately upgraded.