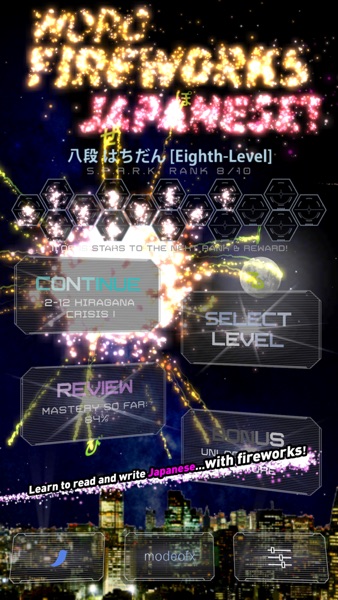 This app has been updated by Apple to display the AppleWatch app icon. * Many bug fixes * UI and usability polish * Answers that stem from different questions will still match if appropriate * Switch to free-to-play model -- existing customers can store status on via iCloud

Join the S.P.A.R.K. team! Explode fireworks, make contact with aliens, and do it all while learning Japanese!

Each level is procedurally generated to give you the most useful balance of reinforcement, review, and new material. The more you play, the better Word Fireworks tailors its levels to you!

Make it through sprint levels, audio listening stages, and confusion-clearing challenges to launch your own fireworks show!

Unlock more than hundred types of fireworks, from the Chrysanthemum to the Donut-Kebab. Or make your own custom firework design!

Word Fireworks features male and female voice recordings so you can get the language in your ear. You’ll learn the correct pronunciation and the correct way to read and write Japanese — all while setting off gorgeous fireworks!

Kickstart your Japanese learning by lighting up the night sky with your learning — with Word Fireworks Japanese! Ganbatte!

So there’s a lot of fixes 1.the graphics shown at the advertisements are not the same at the game 2.when you restart the app some fireworks that were already unlocked get locked again..same as the bounces when you finish the whole chapter..o didn’t get the dandelion fireworks neither the custom 3 or wurling crackles 3.you don’t get the white circle thingy you see at the advertisement

Was fun, but after a few lessons it wanted me to pay to unlock the ‘full version’. Doesn’t even say it contains in app purchases. Like I said, it’s fun to practice. But the ‘pay to unlock more levels’ is concerning, and puts me off from even wanting to continue. A real disappointment on that part. Otherwise good.

This is a good app. Although the target of each lesson is a little hard to understand sometimes. Some of the dragging is hard to do, too. Overall it's pretty good for learning how to write in Japanese.

It's great, I think I know words but this makes me have to think quicker and actually react to the words rather than see the characters, think of them in English and then go "oh it's this!" I'm forced to go straight from a to c. But sometimes the game is frustrating as it does things to throw you off but mostly when it layers things on top of one another and then I end up pressing the wrong thing is VERY VERY BERY frustrating. But work it other wise.

Haven't tried that much of it yet, but like someone else said: please let us unlock levels by watching ads! That would be great 🙂 Also some parts are distracting with all the text, and it would be nice to have a setting for faster or slower text/dialogue pace. Cool idea with the scifi alien storyline!

This has really been helpful for learning my kana. My only small complaint is that some of the games are a little counter intuitive, and the tutorial can get downright annoying. Otherwise, I absolutely love it, and am going to keep playing until I am more literate than this program has teaching for. :)

It's pretty early to have a conclusive review, but I've enjoyed the few levels I've done. It's a little hard to see sometimes because of everything that's going on onscreen but I play on an iPad so it's not too much trouble for me whereas it may be a bit more difficult on a phone. So far I've seen hiragana and I'm hoping katakana will be covered too. Unsure if this will teach grammar, kanji, or vocab. Update: as soon as you complete the prompted app review, the free content is over. It would have been nice to complete hiragana or maybe get a small taste of what the katakana, kanji, or vocab would have been like. Looks like it doesn't teach grammar but instead helps you memorize the kana, some kanji, and some vocab. I already have an app that does this in a more visual/pneumonic way (my style of learning) so I prob will not purchase the full version. It's very pretty fireworks for reviewing though! :)

I learned some Japanese in college and wanted to review my kana to become more fluent for continued self-study. This is a fast paced game but great for reinforcing quick, intuitive reading. My only issue is the busy-ness of the screens (including lots of tiny text...I'm on a 5 SE, so maybe it's a bit better on a 6 Plus or something) is tough on my distractable brain. If you like instant gratification games, this works well!

Very cool app, great for those who learn by playing games. 😊

This is a fantastic app for those who learn best through games. However, after the first 7 characters, you have to buy the full version for $2. I enjoy the app and I think this price is fair, but I would have much rather played a version with ads for free.

Great app to refresh your memory

love how it's set up. makes it easy to remember and it's so convenient.

This app is good if you can focus easy for me it was kind of hard playing the game and got answers wrong just because I couldn't play the game properly or something else got in my way while trying to answer another question which for me was kind of annoying. But it would be a fun way for younger and more game driven learners to learn

Quite a fun way to learn kana, but as a game it sometimes fails because it doesn't manage visual clutter well from overlapping selections.

Pretty awesome!! Im glad I can brush up on my language skills with this~ The one star loss is due to difficulty in using the cannons to shoot the appropriate letters sometimes. Also, the remnants from explosions is obscuring letters. Otherwise, A+!

Keeping my interest so far. Rated 4 stars due to the particles being so intense sometimes that I don't know what's going on.

It's ok but super distracting

You guys used to have the app free now you are charging the app. Please return to free